This location is the birthplace of Jeremiah Newman. Cleric, academic, philosopher and author, Dr Newman was Bishop of Limerick from 1974 until his death in 1995. He previously served as Professor and President of Maynooth College.

Jeremiah Newman was born to Joe and Catherine Newman on March 31, 1926. His mother was better known as Cass, and Kiely was her maiden name. Cass kept a shop at the family home in The Square where glassware and fancy goods were sold. Joe Newman busied himself with work on his farm, outside the town. The Newman family were deeply rooted and well respected in the locality. Jeremiah was the only child in the family. He would have been called Jerry Newman and later, Father Jerry, by all who knew him growing up in Dromcollogher. 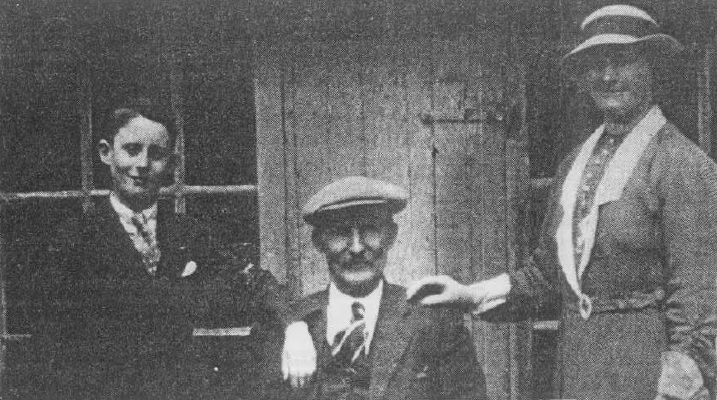 The young Jeremiah Newman with his parents Joe and Catherine Newman. 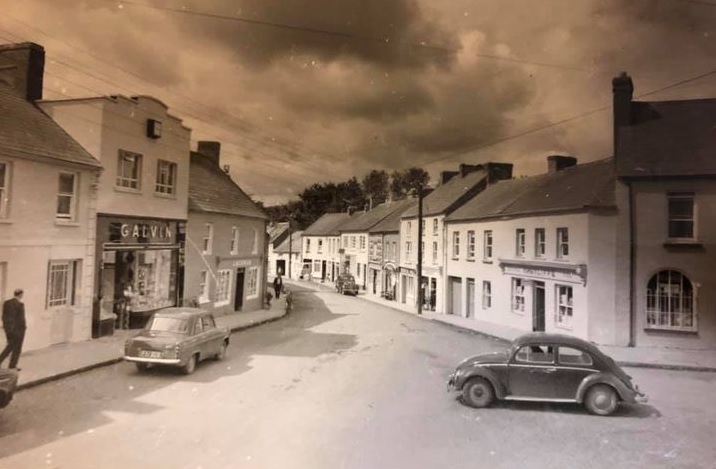 Beside the premises with the glass facade, named GALVIN, stands the shop in Dromcollogher where Jeremiah Newman grew up.

From this house in The Square, the young Jerry Newman would have set out for National School in Pike Street and later, Miss Egan’s Scoil Mhuire Secondary school on the other side of The Square at O’Brien’s. He later modestly claimed not to have been exceedingly brilliant in those days nor did he work too hard. Indeed he claims to have been a bit of a rascal at Scoil Mhuire and narrowly escaped being thrown out on a number of occasions. To pursue his aspirations for the priesthood, Jerry Newman transferred to St Munchin’s, the diocesan college in Limerick and thereafter to so many more institutions, as he rose through the ranks of academia and the Church. 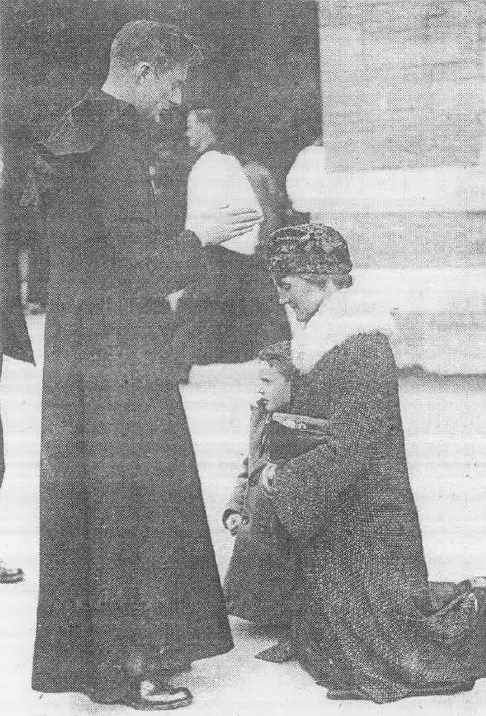 A six year old Jerry Newman in Maynooth for the first time, with his mother Cass, receiving a blessing from their cousin on the occasion of his ordination. Fr Barry asked the boy what he would like to become. “A priest” replied the boy – “I think I’ll make you a bishop”, quipped Fr Andrew – prophetic indeed.

Dr Newman was by nature a student of philosophy, specialising in social philosophy and with particular emphasis on Church/State relations. His research, lectures and many publications earned for him international renown. He was gifted with a clear, sharp, logical mind allied with great mental powers of retention and recall and had a tremendous capacity for work. 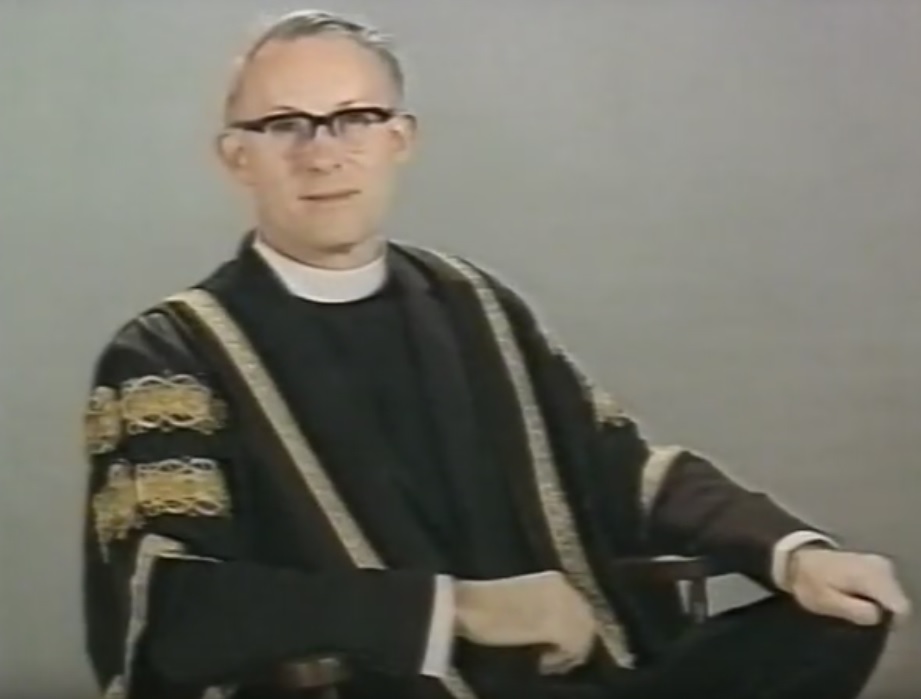 He was a man who had the courage of his convictions and was outspoken on many of the social and political issues of the day It was not easy to score debating points against him. Loyalty to the teaching of the Church and to the mind of the Holy See was a top priority for him As Bishop of Limerick, his presence and influence were felt, not only in Limerick, but nationally. His statements on matters of Church and State made the headlines and got widespread attention. 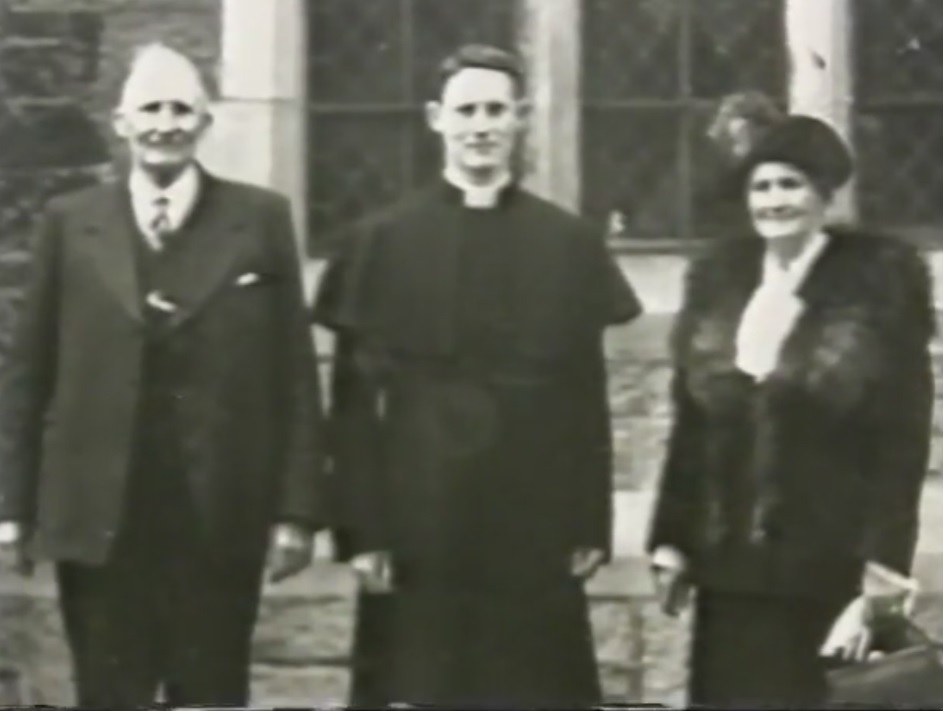 Dr Newman with his parents on the occasion of his ordination in 1950.

Though he was kind and considerate in dealing with his priests, he was never what one might call an easy ‘push over’. His priests respected him for the way he treated them and for the confidence and trust he put in them. He had a pleasant sense of humour, was quick witted and a good conversationalist. These qualities enabled him to relate well with people. He showed the common touch, as could be witnessed by the ease with which he mingled among young and old, on the occasion of Confirmations. He was indeed much loved and appreciated. He was concerned for the welfare of the people throughout the County Limerick Region and displayed competent leadership on the relevant civil issues affecting this region. As President of Maynooth College, he got an insight into University organisation which enabled him, as Bishop of Limerick, to make a positive contribution to the development of University of Limerick, Mary Immaculate College and third level education generally in Limerick. As manager and administrator of the affairs of the Diocese, he exercised his office effectively and decisively. 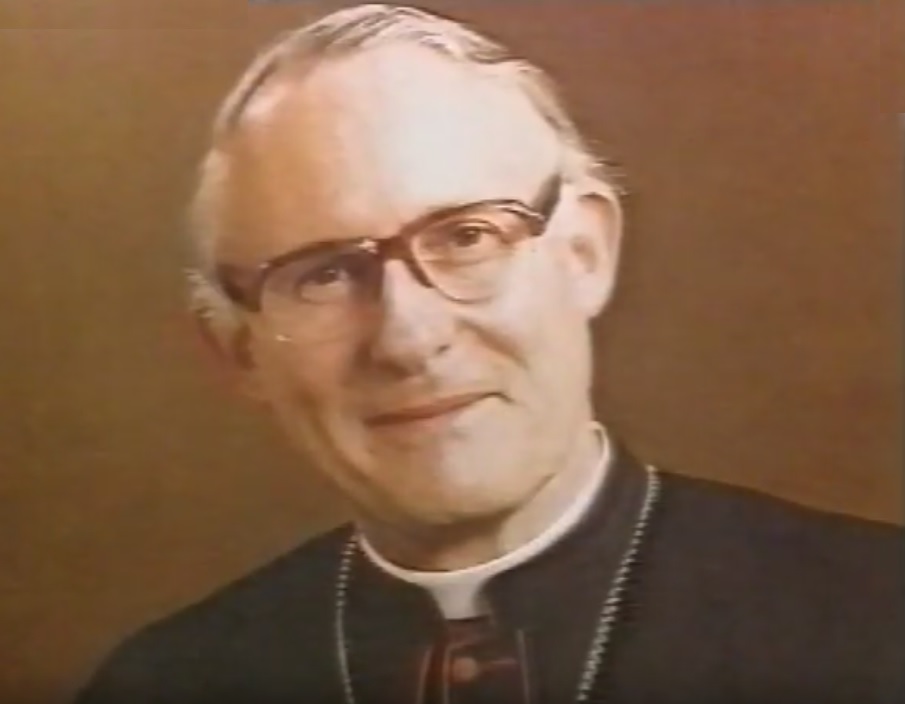 Apart from the extensive building programme he carried out in the city to cater for its expanding population, major building projects have been carried out in practically every parish in the Diocese over the past twenty-one years. Having due regard for the cost, he strove to give character and an aesthetic dimension to buildings and he always had a significant input in their design. The tasteful reconstruction of St John's Cathedral bears its own testimony. This, together with the many fine new or restored churches and schools throughout the Diocese, will stand for many years to come as a fitting monument to his memory. He left behind a well organised Diocese where the faith of the people was very much alive and pastoral policy in its many and varied aspects, is clearly outlined in one of his publications, ‘Handbook for Diocesan Priests’. He managed carefully and skilfully the various funds and has consequently left the Diocese in a very sound financial condition. 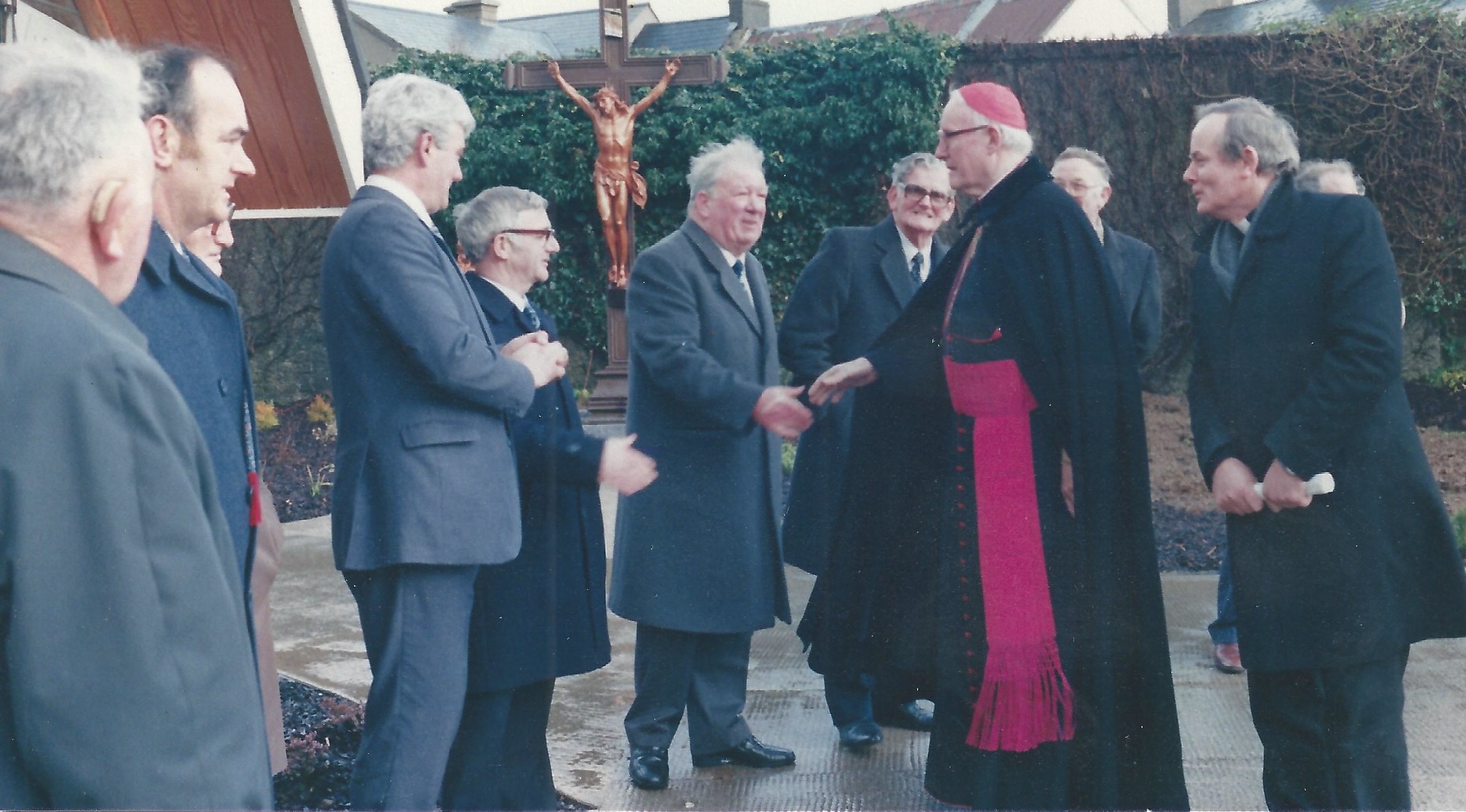 Considering his heavy work load his contemporaries wondered where the Bishop found time to do research for his lectures and large volume of published work which he continued to produce. Dr Newman was a man of deep, firm faith which he expressed with great sincerity but never in a pretentious or sanctimonious manner. Fortified and assured by this faith, he looked to the future with courage and hope. In any list of great Bishops of Limerick Diocese, the name of Dr Jeremiah Newman would have to be among the first. 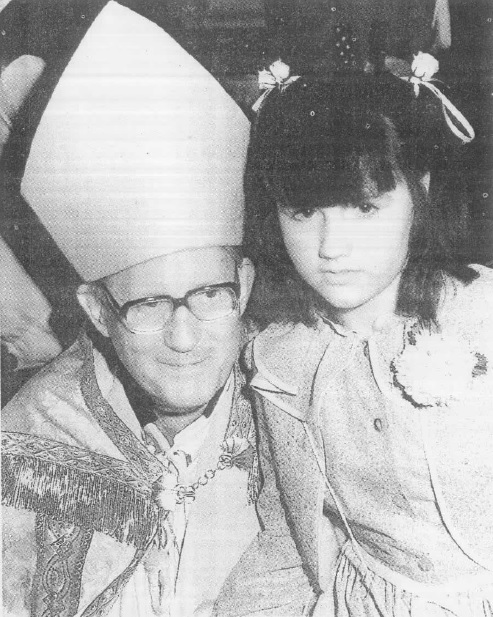 On the day she was confirmed by Bishop Newman in Ballybricken, the late Dolores O’Riordan, lead singer with The Cranberries.

Jerry Newman always retained a deep affection for his native parish of Dromcollogher/Broadford and maintained a keen interest in the people and developments there. Confirmation days were very special to him and he would spend hours meeting all the children and their families, tracing relations and renewing old acquaintances. The restoration of the local church was also dear to his heart and he took a very close interest in every detail of that fine project. He was immensely proud of the town’s win in the Glor na nGael competition and made sure he was here when President DeValera came to Dromcollogher to present the award. It was his direct intervention that ensured that the Papal Visit in 1979 included Limerick when the largest crowd ever assembled in that city attended Mass with the now Saint John Paul. 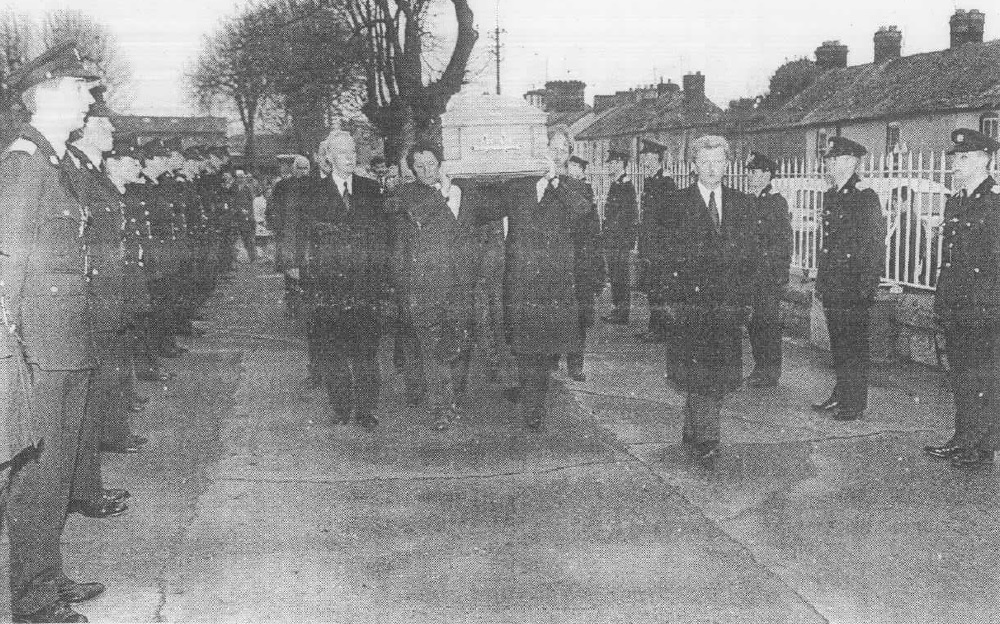 The casket carrying the remains of the late Jeremiah Newman were borne into St John’s Cathedral, Limerick for his requiem by his cousins Seamus and John O’Sullivan, Brian Collins, and Tom, Ben, and Gerard Cronin. 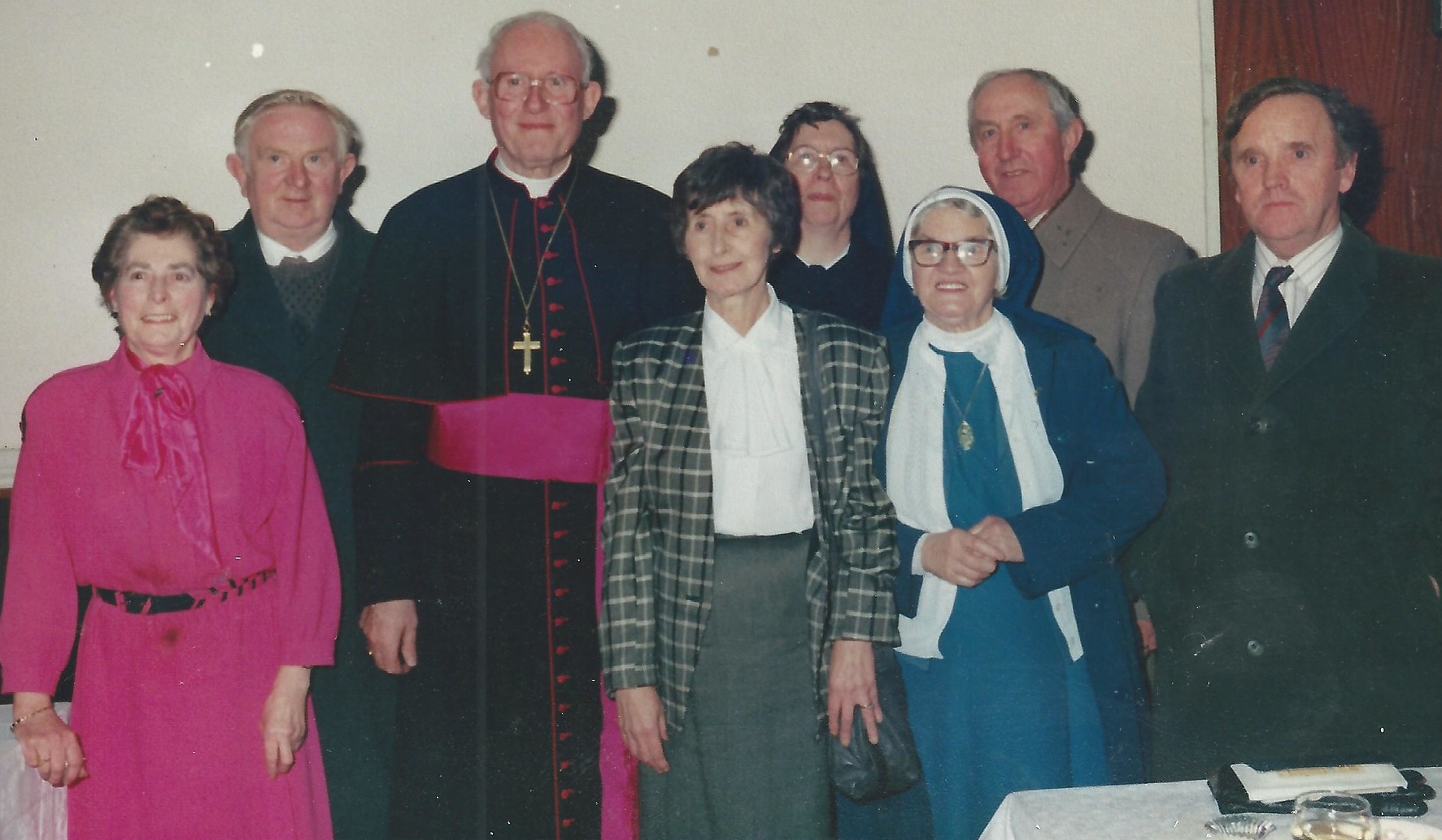 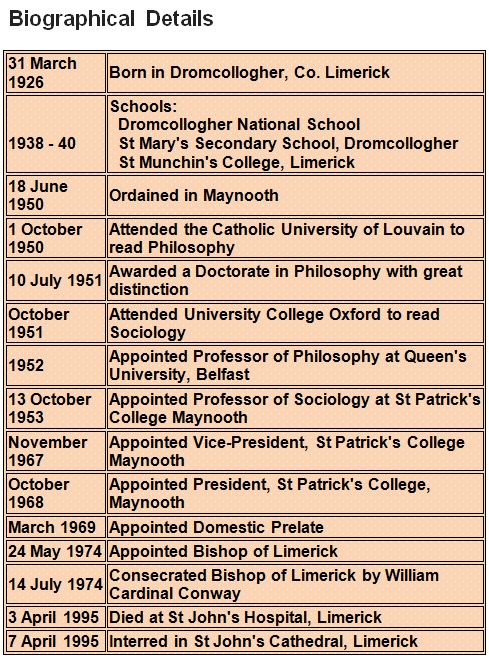