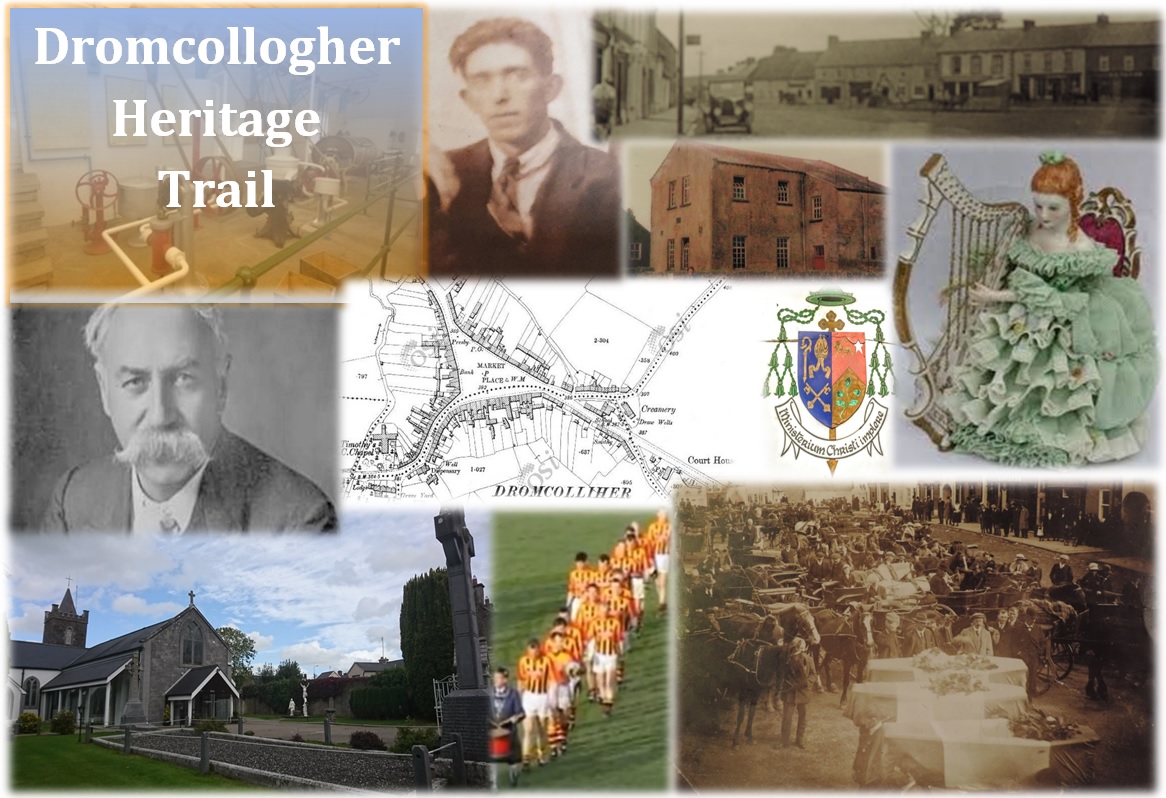 - The individual plaques on the Heritage Trail in Dromcollogher and the Information Boards in The Square are linked to the articles on this site.

- The interactive map below can also be used to take a virtual tour and discover the locations on the Dromcollogher Heritage Trail and access their related details.

You need to enable JavaScript to view the interactive map. It uses Leaflet.

- Other items of local cultural and historical interest, not included in the physical Heritage Trail, may also be added to this site from time to time.

01 - Percy French - "There`s only one street in Drumcolliher"

Renowned song-writer and artist, Percy French boarded at the hostelry of Anthony McAuliffe during a visit to the town. He was so taken by his treatment there in 1894 that he composed one of his favourite songs – ‘Dromcolliher’.

Dromcollogher had the distinction of being the second location outside of Dublin to organise a Volunteer Corps. On the occasion of the Easter Rising the local Company joined other units at Glenquin Castle in readiness to participate in the national uprising. They subsequently participated in several operations including the Burning of Dromcollogher Courthouse and the Dromcollogher Ambush.

The destruction of Dromcollogher courthouse on the night of the 20th June 1920 was one of the most tragic chapters in the history of the West Limerick Brigade operations during the War of Independence. David Brennan, Liam Danagher and Paddy Buckley lost their lives. Jack Farrell survived with the severe injuries he sustained in the operation.

When founded in 1936 by Miss Josephine Egan (later Mrs Savage), Scoil Mhuire was located in The Square. In 1946 it transferred here to the former RIC Barracks. St Mary's Secondary School closed in 2002 with the opening in the town of Hazelwood college.

Located between Pike Street and Pound Street, a fine two-storey building housed the Boys School and the Girls School on separate floors and which were accessed from different streets. Built in 1886, it was replaced at a new location by Scoil Naomh Iosef in 1959.

Ireland's first Co-operative Creamery was set up in this building in 1889. It was operated here on the principles of Horrace Plunkett's Co-operative Movement.

The Dromcollogher Ambush was an incident from the War of Independence that took place on the streets of Dromcollogher on May 14, 1921. At 6pm on the day of the attack the volunteers moved to take up positions around The Square. A patrol from the local RIC barracks is described by the Irish Military Archives as comprising of sixteen men, RIC, Tans, and Auxiliaries, armed, some with rifles, some with repeating shotguns, and some with revolvers. An engagement lasting about two hours took place. One of the leading file of the patrol was killed instantly. Two other constables were injured in the attack that became known as the Dromcollogher Ambush, on Saturday, May 14, 1921.

Dromcollogher has a very long association with cattle trading, so much so that it is written into our landscape. The stream that runs through here and the central space in the town reflect a history of fairs and markets. In more recent times the town and its hinterland has been served by a Mart.

This labyrinth is placed directly on the site of the former Dromcollogher Parochial House, home to Hugh Canon O’Connor, John Canon Liston and Seamus Canon Ambrose. The design and layout of this Labyrinth is based on the labyrinth of the Cathedral Notre Dame of Chartres, the town in France, about 80 km (50 miles) southwest of Paris.

Saint Bartholomew’s Church was built in 1824. It replaced a previous church which had existed in various forms at a site in the graveyard opposite, since 1201. The church here was renovated on a number of occasions, most recently in the 1990's when it was radically upgraded. The work included the replacement of the nave walls with glass panels, forming the light-filled cloister-like side aisles you can see today.

Dromcollogher Vocational School opened here in 1941. Later known as The Community College, it moved to a new greenfield site and became Hazelwood College in 2002. The school then became An tIonad Glas, The Organic College, which was founded here in 1992.

48 men, women and children lost their lives when a terrible fire swept through the upstairs loft that served as a temporary cinema at this location on the night of Sunday, 5 September 1926.

This plaque marks the birthplace of Jeremiah Newman. Cleric, academic, philosopher and author, Dr Newman was Bishop of Limerick from 1974 until his death in 1995. He previously served as Professor and President of Maynooth College. 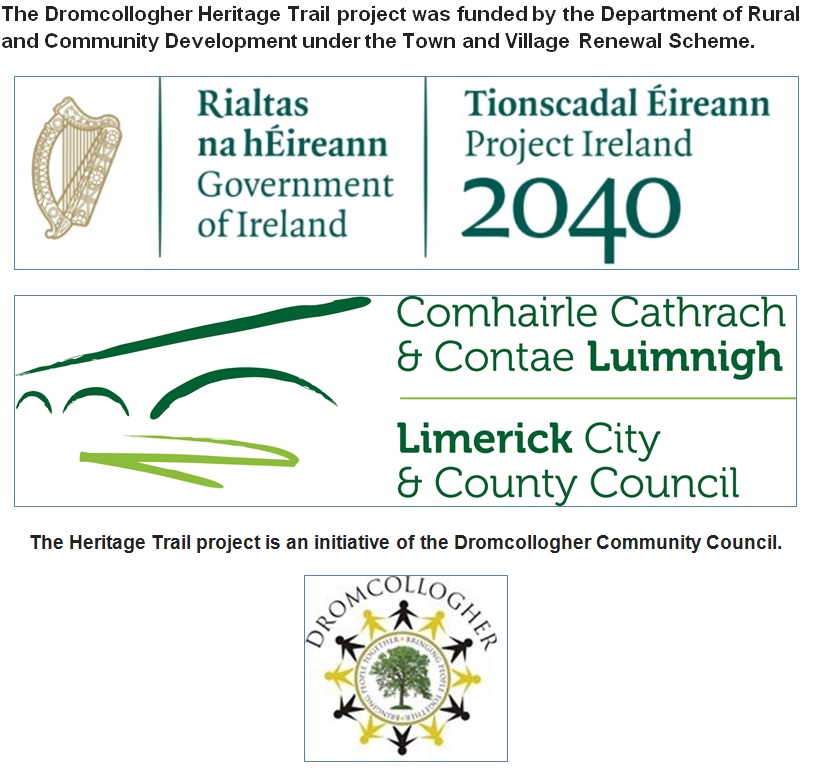