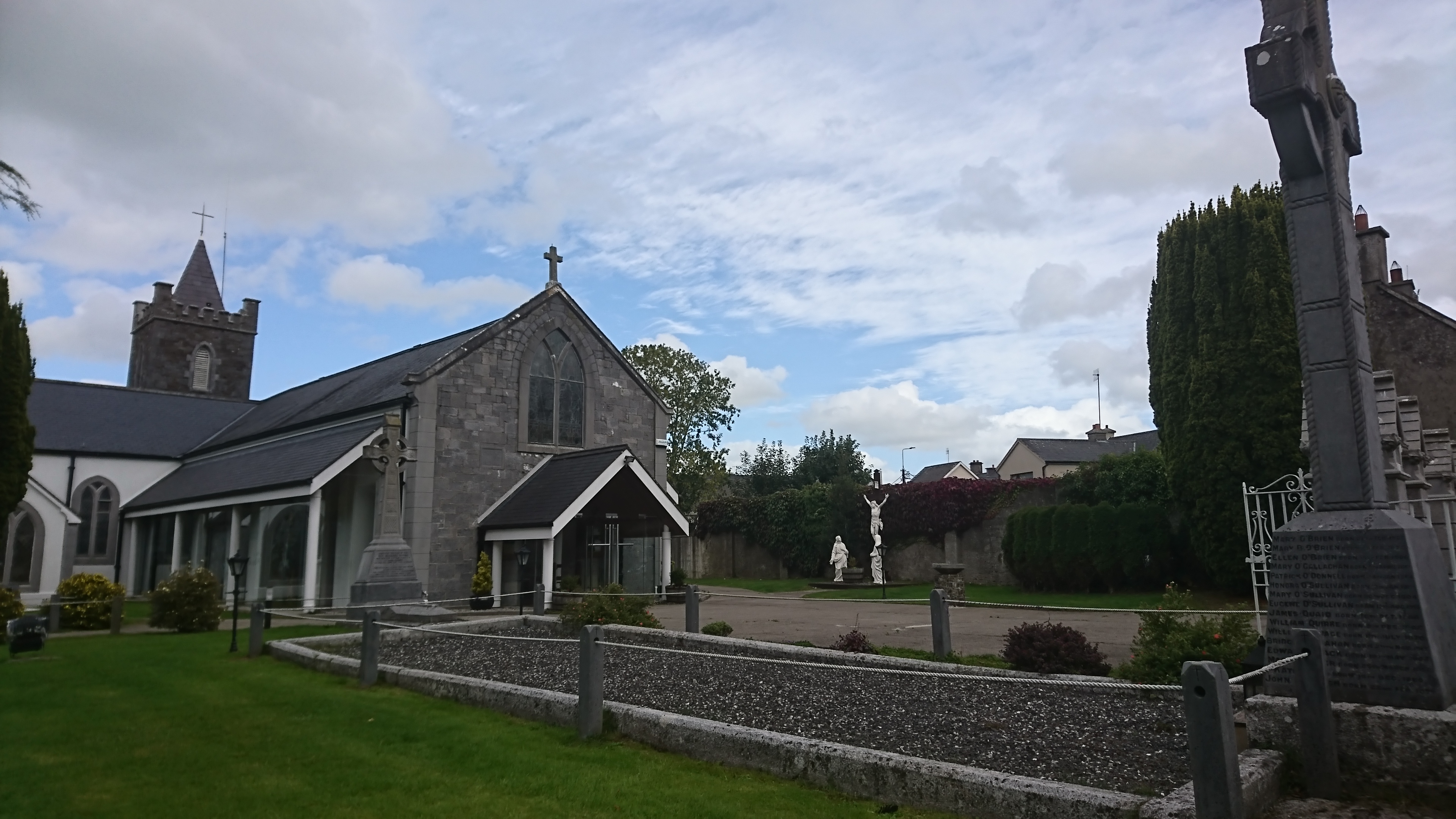 Saint Bartholomew’s Church was built in 1824. It replaced a previous church which had existed in various forms at a site in the graveyard opposite, since 1201. The church here was renovated on a number of occasions, most recently in the 1990's when it was radically upgraded. The work included the replacement of the nave walls with glass panels, forming the light-filled cloister-like side aisles you can see today.

In 1201 a list of Churches was drawn up as part of a ‘list of churches and land of the see of Limerick’ and this list mentioned the Church in Dromcollogher as well as references to the churches of Killagholehane, Cloncrew, Mahoonagh, Killeedy and Tullylease. At the end of the Thirteenth Century the Anglo Norman control over this part of Limerick was severely tested by the resurgent Gael. At this time twenty-two churches in the south west of County Limerick were destroyed. An early mediaeval church in Dromcollogher was destroyed by war in 1302. It was rebuilt and was known as the capella Dromcolkylle in Corcomohid in 1418, when it was part of the larger parish of Corcomohide. Father Maurice England was registered as parish priest of the larger surrounding area in 1704, and a new parish was formed after his death in 1719. Father Patrick Quin, parish priest, who died in 1778, was buried within the walls of the ruined mediaeval parish church. The ruin of original church for the parish of Dromcollogher is located in the graveyard and stands in the Glebe of Carhooard West and the town of Dromcollogher. It could be that the ruin in the graveyard is the successor of the original church. Some who have examined it suggest it more likely dates from the Fifteenth Century and was most likely built by the O’Nunans. 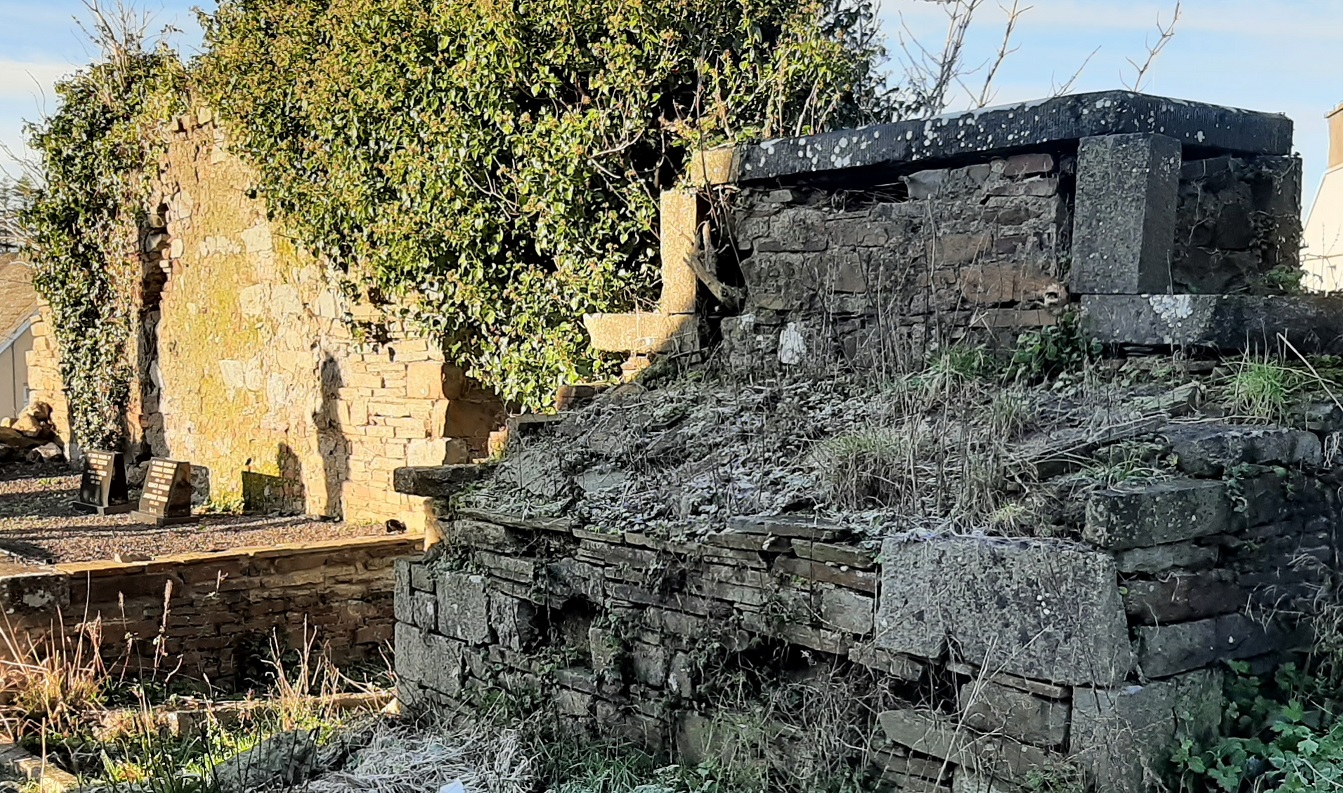 A view of one of the walls and a tomb inside the old Church in the Graveyard.

Saint Bartholomew’s Church was built in 1824 by Father Michael Fitzgerald, who bought the site from Robert Jones Staveley of Glenduff Castle, Co Limerick, a judge of the High Court. A striking aspect of the building of the Church in Dromcollogher was the patronage it enjoyed from the Catholic gentry families in the area. The contributions of the Sheehy and the Hannigan families from example, bore eloquent testimony to the continuing vigour and loyalty of the old landed families.

Renovations were carried out in 1861 by Father Patrick Quaid, who also built a new church in neighbouring Broadford. Father Michael Byrne (PP 1902-1917) refurbished and decorated the church in the early 20th century, with improvements designed in 1906-1909 by the Limerick-based architect Brian Edward Fitzgerald Sheehy (1870-1930). The apse and many of the stained-glass windows were added at this time. The stained-glass windows behind the altar depict (from left to right) Saint David, the Virgin Mary, the Sacred Heart, and Saint Catherine. They were donated by David and Mary O’Leary Hannigan of Kilbolane Castle, Milford, Co Cork, and other members of their family in 1906. 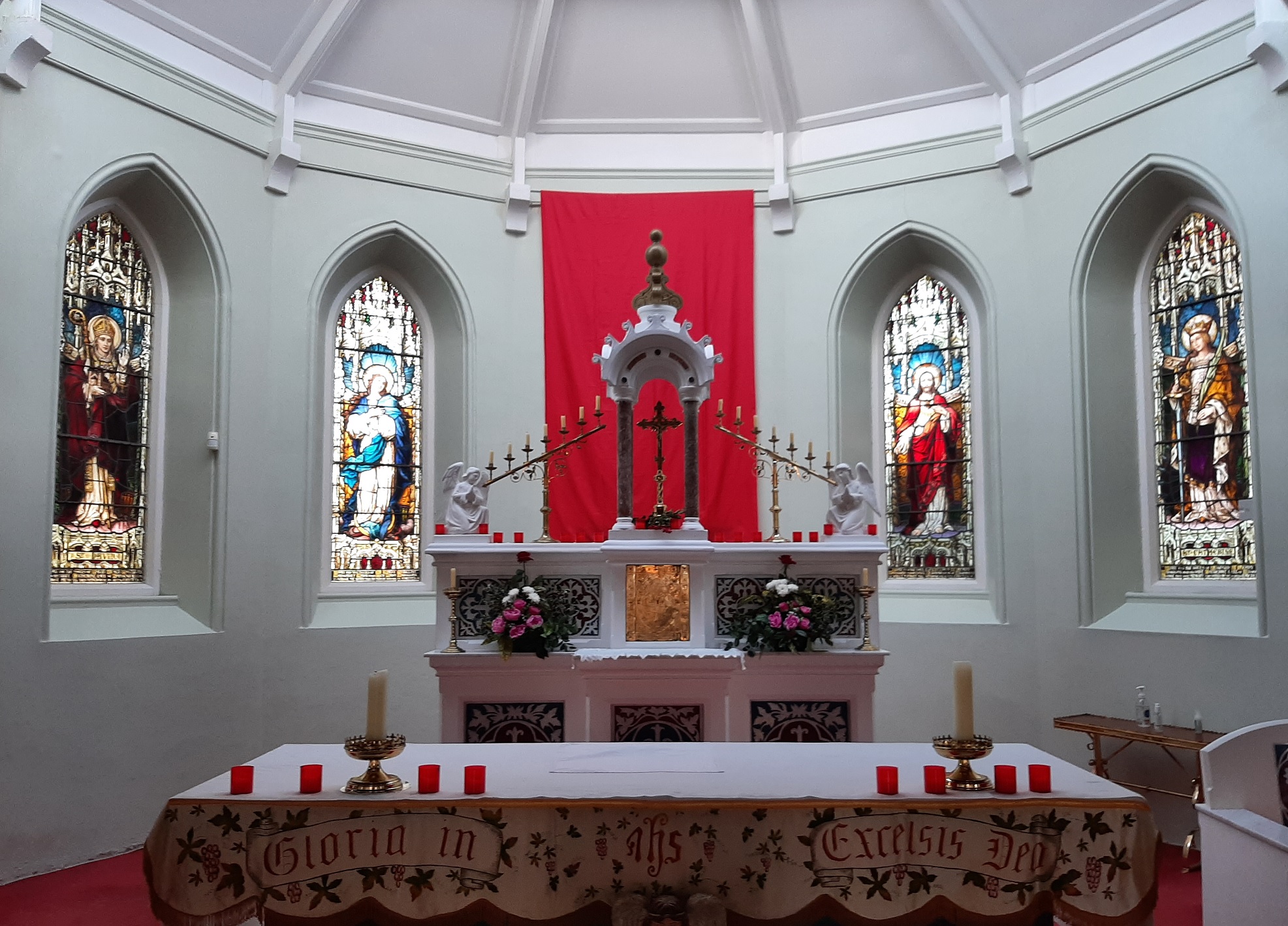 The Altar and Apse in St Bartholowmew's Church 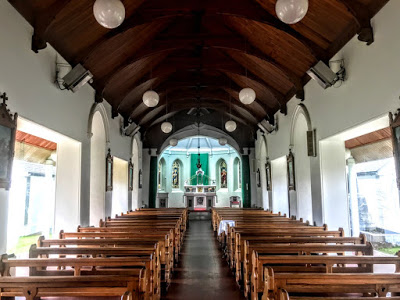 A Pieta statue is in memory of John Gleeson. Other statues in the church include Saint Theresa of Lisieux, Saint Joseph, and Saint Anthony. The Stations of the Cross are in memory of Dorcas Mary Aherne. 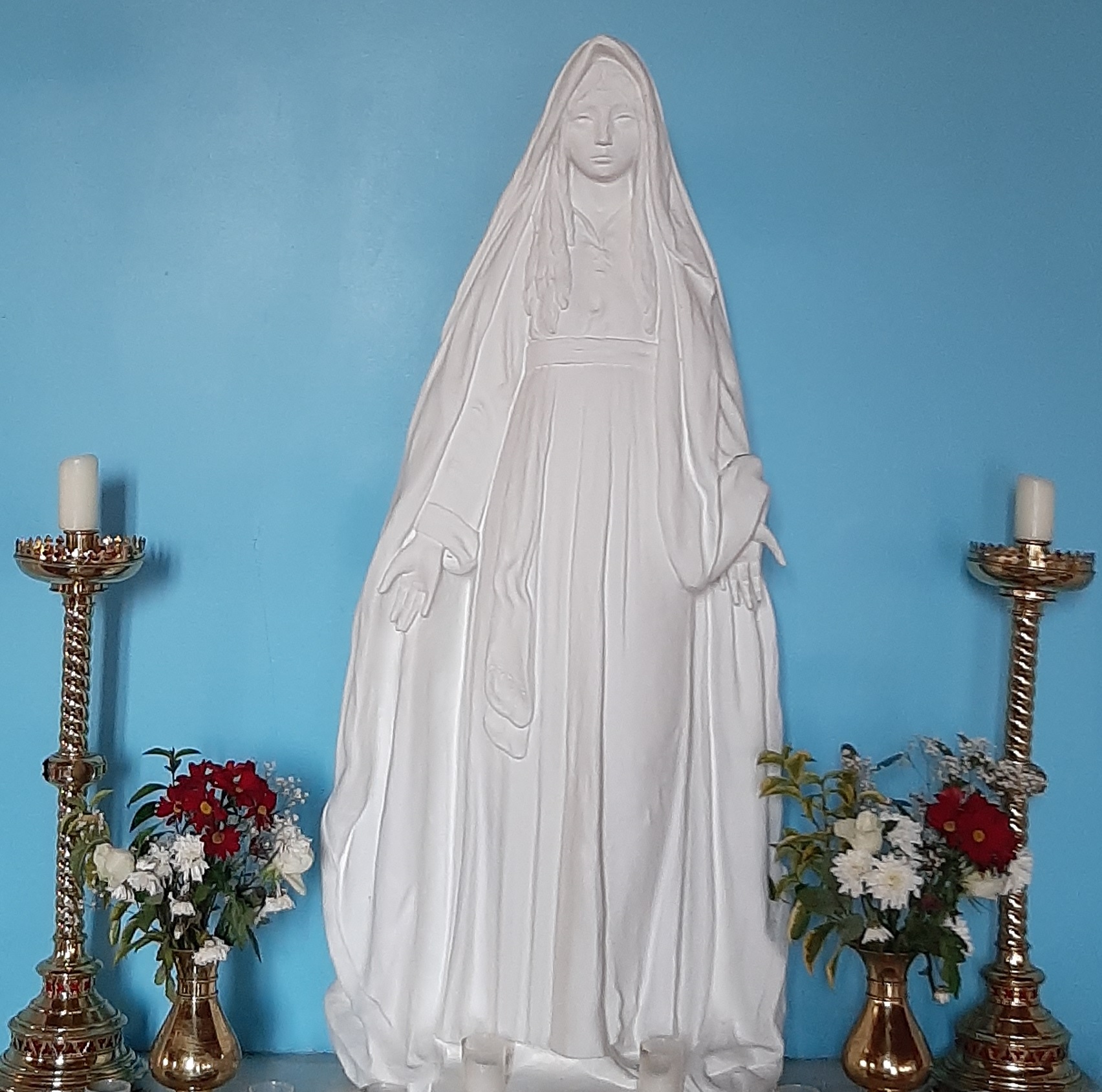 James Pearse (1839-1900), father of the 1916 leaders Patrick and William Pearse, donated the statue of the Virgin Mary to the left of the High Altar. The statue to the right is of the Sacred Heart.

Further renovations were carried out in the 1950s and again in the 1990s. There was considerable debate in the 1990s about whether to build a new church or to radically upgrade the existing church.

The walls of the nave were removed and replaced with glass panels, forming light-filled, cloister like side aisles. The glass panels are the work of Kevin Kelly and the Abbey Stained Glass Studios.

The glass is engraved with both religious and secular scenes, including scenes from the life of Saint Bartholomew, the calling of Saint Nathaniel, who is identified with Saint Bartholomew, in Saint John’s Gospel (see John 1: 43-51), scenes from local history and excerpts from poetry by the local bardic poet, Daibhi O Bruadair (1625-1698), who lived in Springfield Castle, outside Dromcollogher.

This is a cruciform-plan double-height gable-fronted parish church, aligned on a north-south axis rather than the traditional liturgical east-west axis. 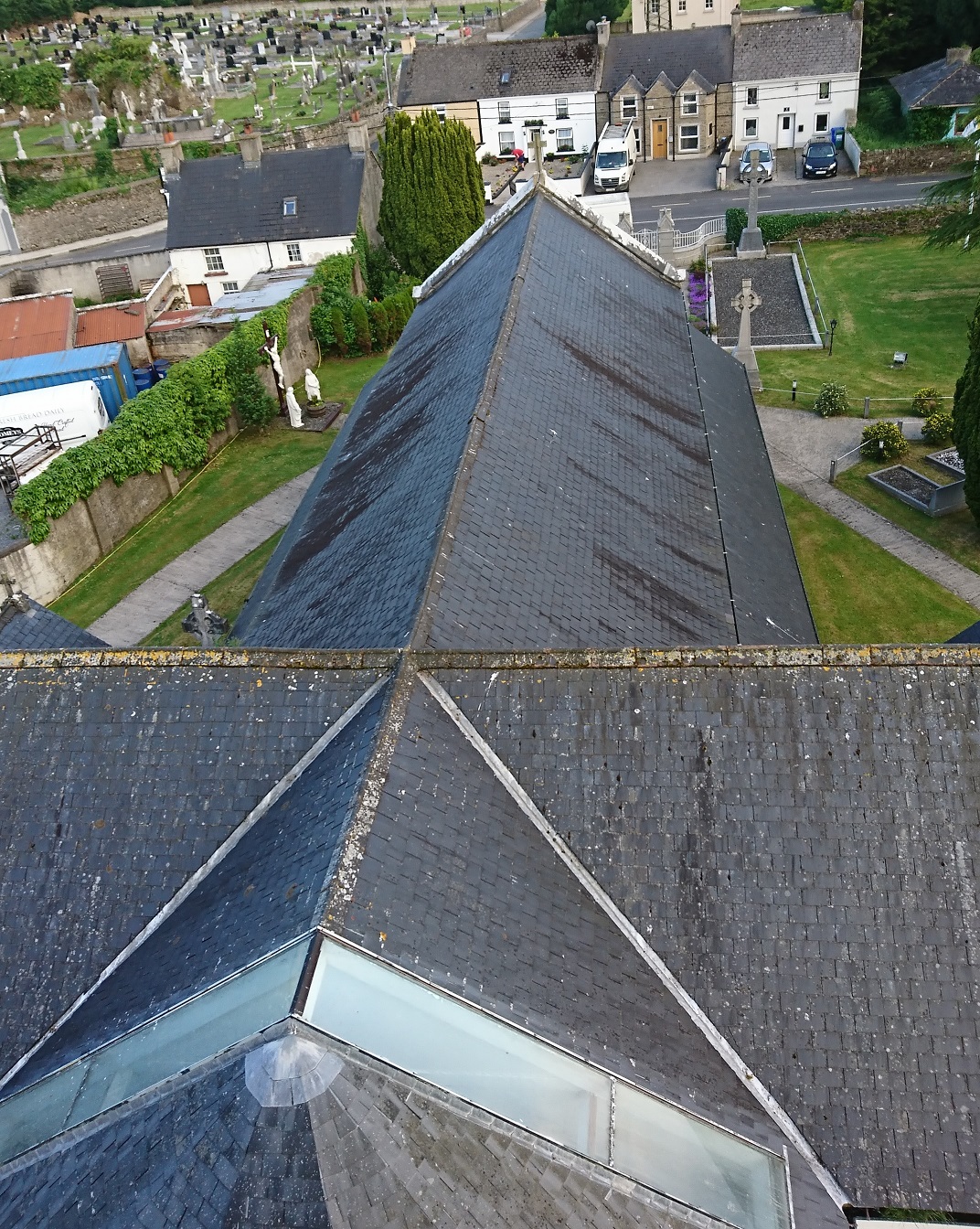 A view from the Bell Tower showing the cruciform Church and the grave of the victims of the Cinema Disaster. The graveyard containing the ruins of the old Church can also be seen.

The church had a three-bay nave, with a recent porch at the front, glazed side aisles at each side, three-bay transepts at the sides, and a canted, three-bay chancel at the liturgical east end (north). There are timber-frame balconies in each transept.

The once free-standing three-stage bell tower to north (liturgical east) is linked to the church and sacristy by a recent corridor. Much of the church’s historic character remains intact, mostly through the retention of key historic features, including the stained-glass windows, decorative stone details and the bell tower. Father William O’Donnell, who was parish priest for 33 years and died in 1876, is the only parish priest buried inside the church. Four parish priests are buried in the church grounds: Michael Byrne; Canon James Foley; Canon John Reeves; and Archdeacon Hugh O’Connor. As mentioned in the other article on this site that describes the 1926 Cinema Disaster, 46 of the 48 victims of that tragedy are buried in the grounds of the church. 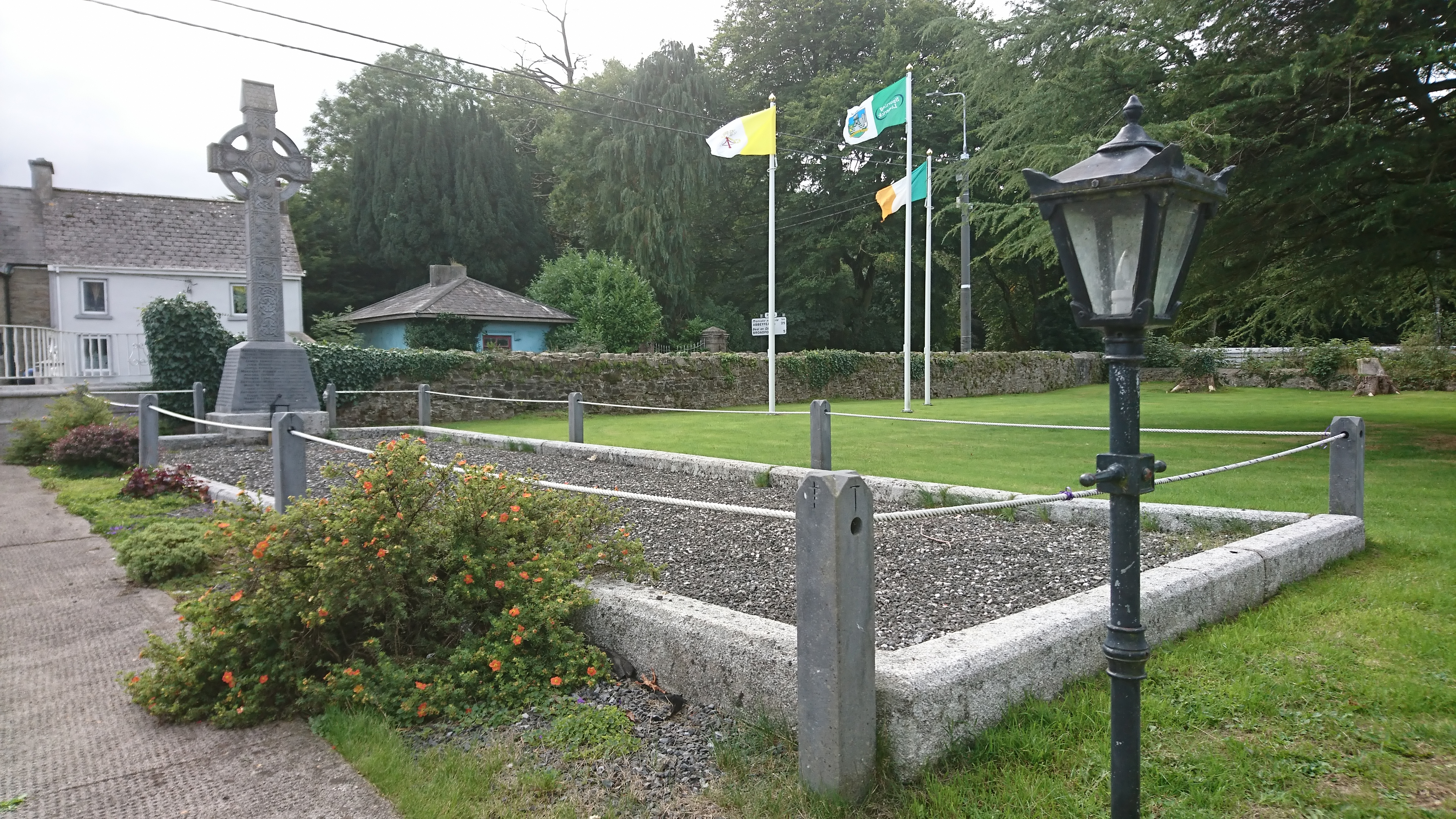 A view of the grave of the victims of the 1926 Cinema Disaster.

Another view of the mass grave and memorial cross as St Bartholowmew's Church in Dromcollogher. 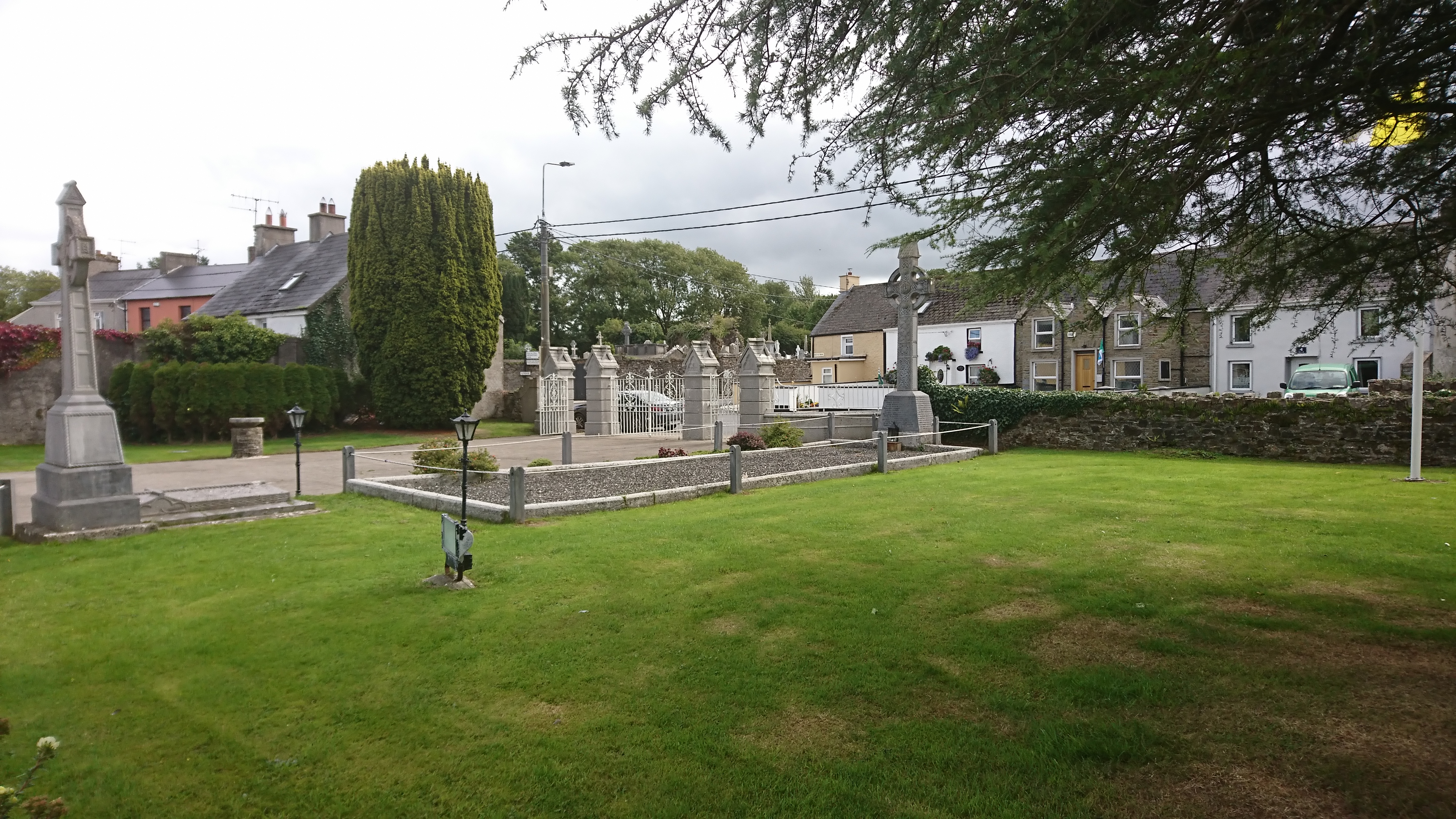