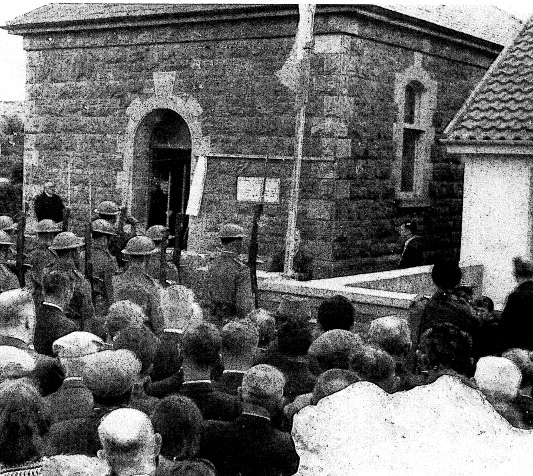 The destruction of Dromcollogher courthouse on the 20th June 1920 was one of the most tragic chapters in the history of the West Limerick Brigade operations during the War of Independence. During this action three of the volunteers lost their lives when a premature explosion occurred in the cut-stone Courthouse building.

The destruction of Dromcollogher courthouse on the night of the 20th June 1920 was one of the most tragic chapters in the history of the West Limerick Brigade operations during the War of Independence. This Courthouse is a solid cut-stone structure situated around 150 yards away from what was the local R.I.C. barracks. This barracks contained a mixed garrison of R.I.C. and Black and Tans numbering around 20. To promote civil strife and paralyze local Government, the IRA decided nationally to destroy buildings such as workhouses and courthouses. On the fateful night, up to sixty volunteers, acting on orders from the West Limerick Brigade Commander Sean Finn and led by local man Tim O’Shea set out to destroy the building. Broadford and Feohanagh Companies were mobilised to support the local Dromcollogher Company. 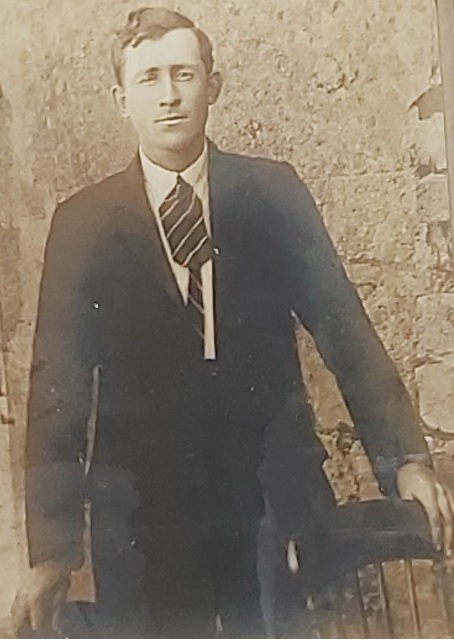 Lieutenant David Brennan led the party of eight volunteers that entered the Courthouse armed with homemade bombs and a can of petrol. The volunteers gained entrance through the side door of the building and sprinkled petrol about the interior of the courthouse. They were still engaged in preparing for the burning when a premature explosion occurred. A number of men escaped the blast with Daniel O’Callaghan from Boola being blown clear out through the doorway. However, four men were trapped inside the blazing building with their only means of escape cut off by a raging fire inside the doorway. The armed men on lookout duty near the Barracks retreated from their position when they saw the blaze, assuming that the raid was a success. However, they soon realised that something was amiss and returned to the scene to discover the horrible truth. A small group of men led by Michael Pierce and Michael Duane ignored the flames and falling slates to burst back into the courthouse. They successfully extracted Jack Farrell and David Brennan, while Liam Danagher managed to jump out through one of the shattered windows. The three men were seriously injured and suffered terrible burns. All efforts to recover Paddy Buckley failed as his body was jammed against an internal door. The three badly burned men were in a pitiful condition and were anointed by Canon Begley in The Square before being removed by horse and cart to a safe house near Freemount. David Brennan was tended to by Dr McCarthy from Milford but died later the following day. In the dead of night, his body was taken by over 200 comrades and buried in Knawhill cemetery in Freemount.

Liam Danaher was taken to a house in Newmarket where he lingered for a few more days before succumbing to his injuries. He was temporarily buried in Rockchapel after a secret wake attended by his immediate family and Father Wall, CC Dromcollogher.

During the truce, both men were re-interred with Paddy Buckley in the Republican plot at Killagholehane Cemetery Broadford. A large military force arrived in Dromcollogher the following day and every house was searched in the town to locate the survivors.

Paddy Buckley's body was removed from the Courthouse and following an inquest, a local jury led by Mr E. Murphy, Mondellihy returned a verdict "that he was a person unknown and had met his death in the discharge of his duty". His funeral took place the following day from the local Church to the Cemetery and was the largest ever seen in the locality. Buckley's Terrace in Dromcollogher was named in honour of Paddy Buckley. He was an orphan who came originally from Glin. He was arrested after a local skirmish in 1916 and spent six months in Belfast prison. He was a tailor by trade and was noted for having a fine singing voice, his favourite song being "Who fears to speak of 98". 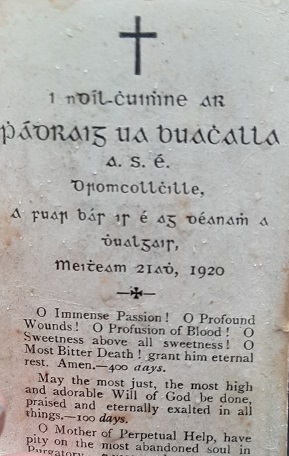 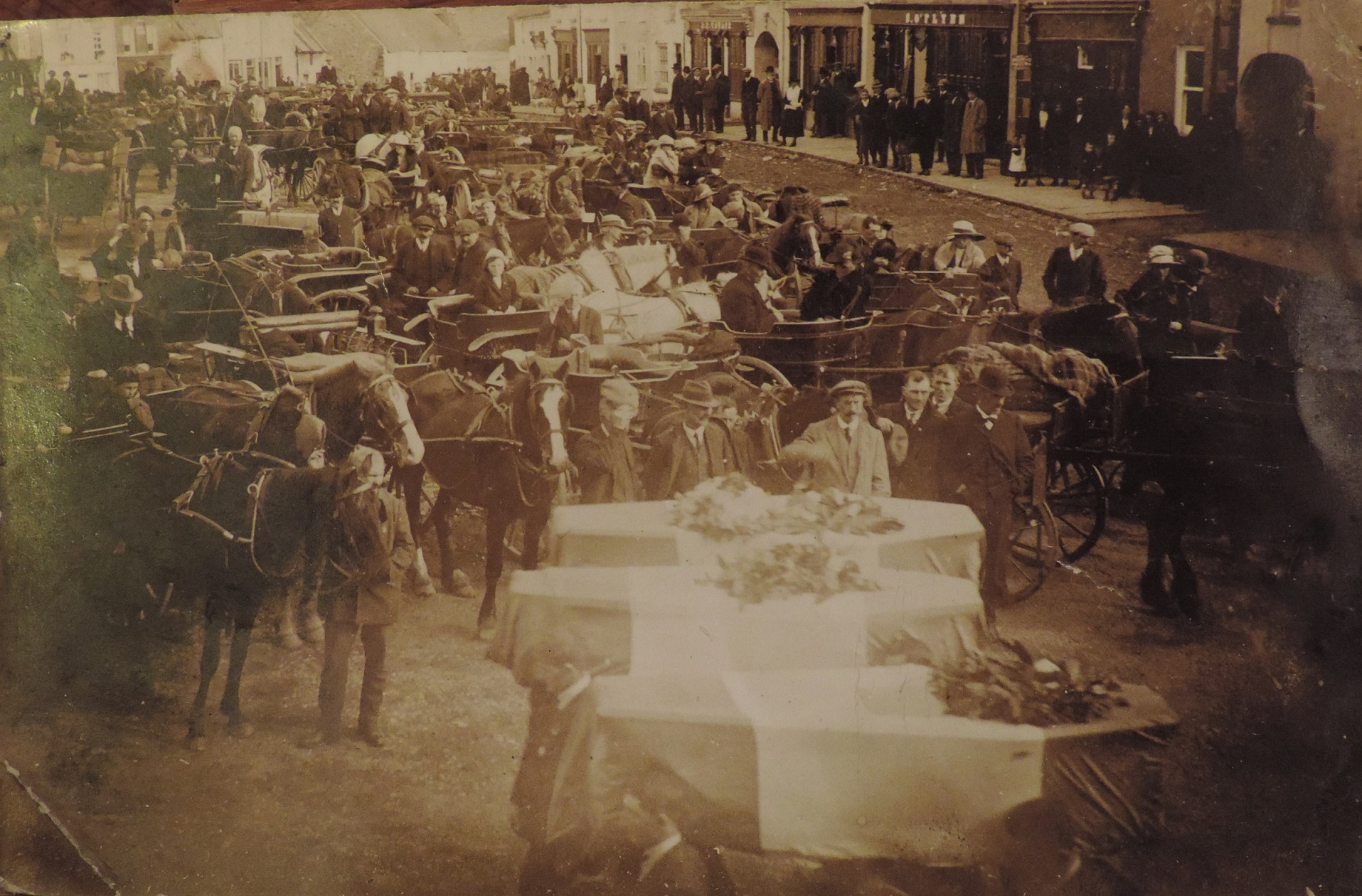 Three coffins, draped with the tricolour, are shouldered through a crowded  Square in Dromcollogher, for what is thought to be the reinterment of David Brennan, Liam Danaher, and Paddy Buckley who lost their lives at the burning of the Courthouse in Dromcollogher.

Jack Farrell suffered very severe burns and at the time, his condition was so critical and painful that little hope was entertained of his recovery. His suffering was compounded by the need to move him from Safe House to Safe House to avoid capture. He stayed in more than six different houses in Freemount, Newmarket, and Meelin, finally spending several months in the home of Jeremiah Mockler of Renahabhann. However, thankfully, he was nursed back to a reasonable state of health although he never fully recovered from the horrific injuries he received. He died 37 years later in September 1957 at the age of 62. Old comrades came from all parts of West Limerick to pay a final tribute when his remains were laid to rest in the local cemetery and a graveside oration was delivered by Mr Donnchadh O'Briain TD, Parliamentary Secretary to the Taoiseach.

The unveiling of the memorial plaque in 1957.

A plaque was erected on the wall of the reconstructed courthouse in memory of the three who perished in the fire. It was unveiled by Michael Colbert T.D, Officer Commander of the West Limerick Old IRA Association before a crowd of 2000 people in July 1956. The unveiling ceremony was preceded by a parade from the Parochial Hall of Old IRA officers and Volunteers from all parts of West Limerick. Jack Farrell, the only man to survive the explosion and fire was in attendance at the ceremony. The procession was headed by the Army Band. The FCA under Battalion Officer Commander Micheal De Burke (father of Father Burke who later served as curate of Broadford) and Lieutenant O’Sullivan provided a guard of honour in front of the reconstructed courthouse. The memorial plaque, a marble slab engraved in Irish with the names of the three Volunteers and recalling the date and circumstances of their tragic end was embodied in the front of the building. 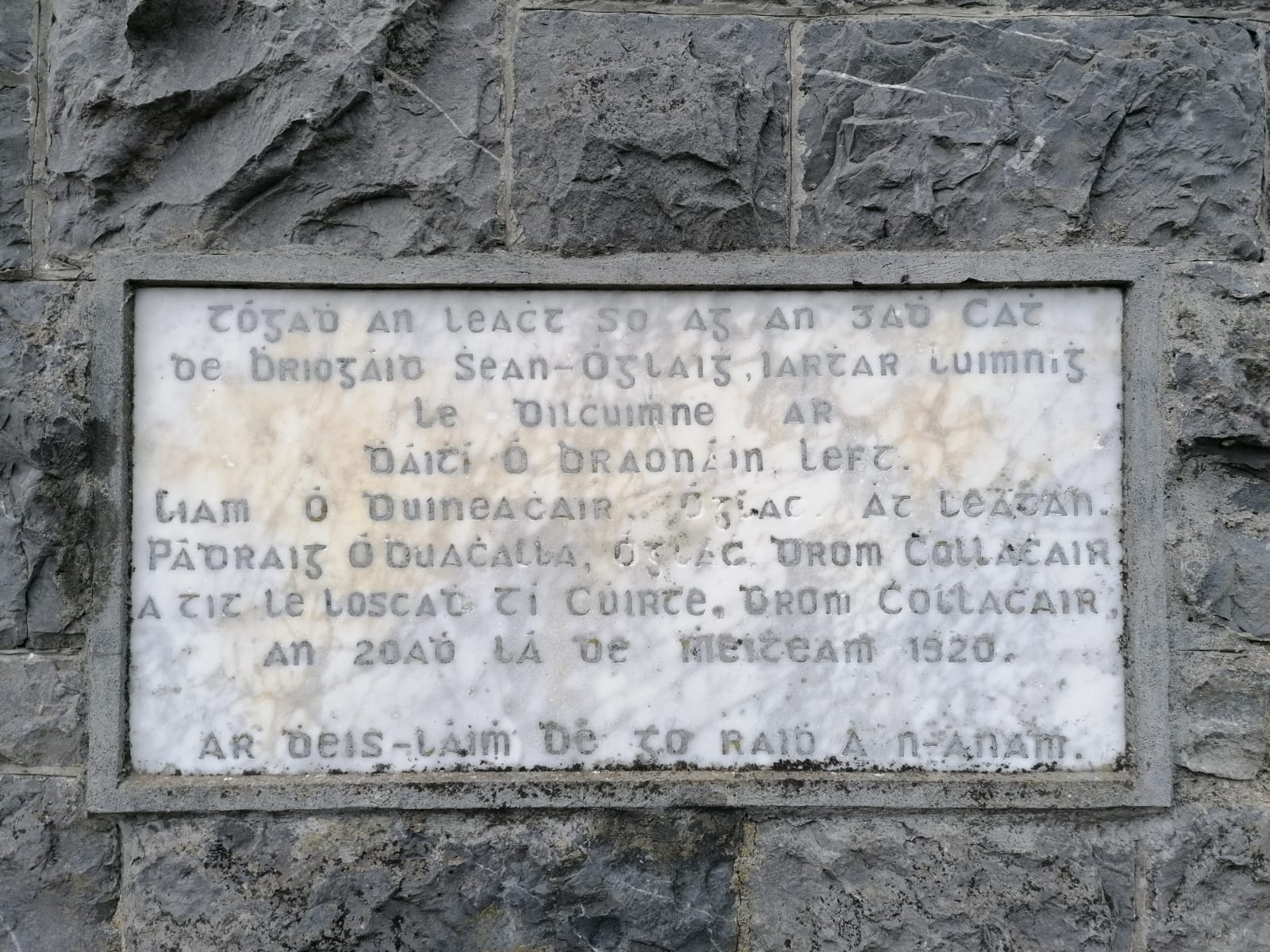 (Translation of the details of the memorial plaque on Dromcollogher Courthouse building.)

The plaque was blessed by Very Rev. H O'Connor PP of Dromcollogher. Mr James Doody, surviving Officer Commander of the 3rd Battalion, reminded the large crowd that they had gathered to fulfil a promise to their late Chairman Mr Ben O'Sullivan who had requested a plaque to be erected in memory of the three volunteers who lost their lives.

Marking the 100 year anniversary of the destruction of Dromcollogher Courthouse in a way that befits the memory of those that were killed and injured there had seen plans for multiple commemorative events stretching over a full weekend. at an advanced state of preparation. Central to such a commemoration would have been the families, from home and abroad, of all the people who were lost and injured, as well as the relatives of all the people who were involved or connected in any way with the tragic event of 1920. Due to the pandemic conditions prevailing in 2020, in order to mark the actual one hundredth anniversary, a small low-key ceremony was hastily organised. Family representatives for David Brennan, Liam Danaher, and Jack Farrell were present. There was nobody to represent Paddy Buckley because, as an orphan, he had no known relatives. The brief wreath-laying ceremony took place under the fluttering tri-colour as Jerry McCarthy representing the family of David Brennan, Brendan Danaher representing Liam Danaher’s family, and Danny Horan for the family of Jack O’Farrell, laid wreaths before a minute of silence was observed. 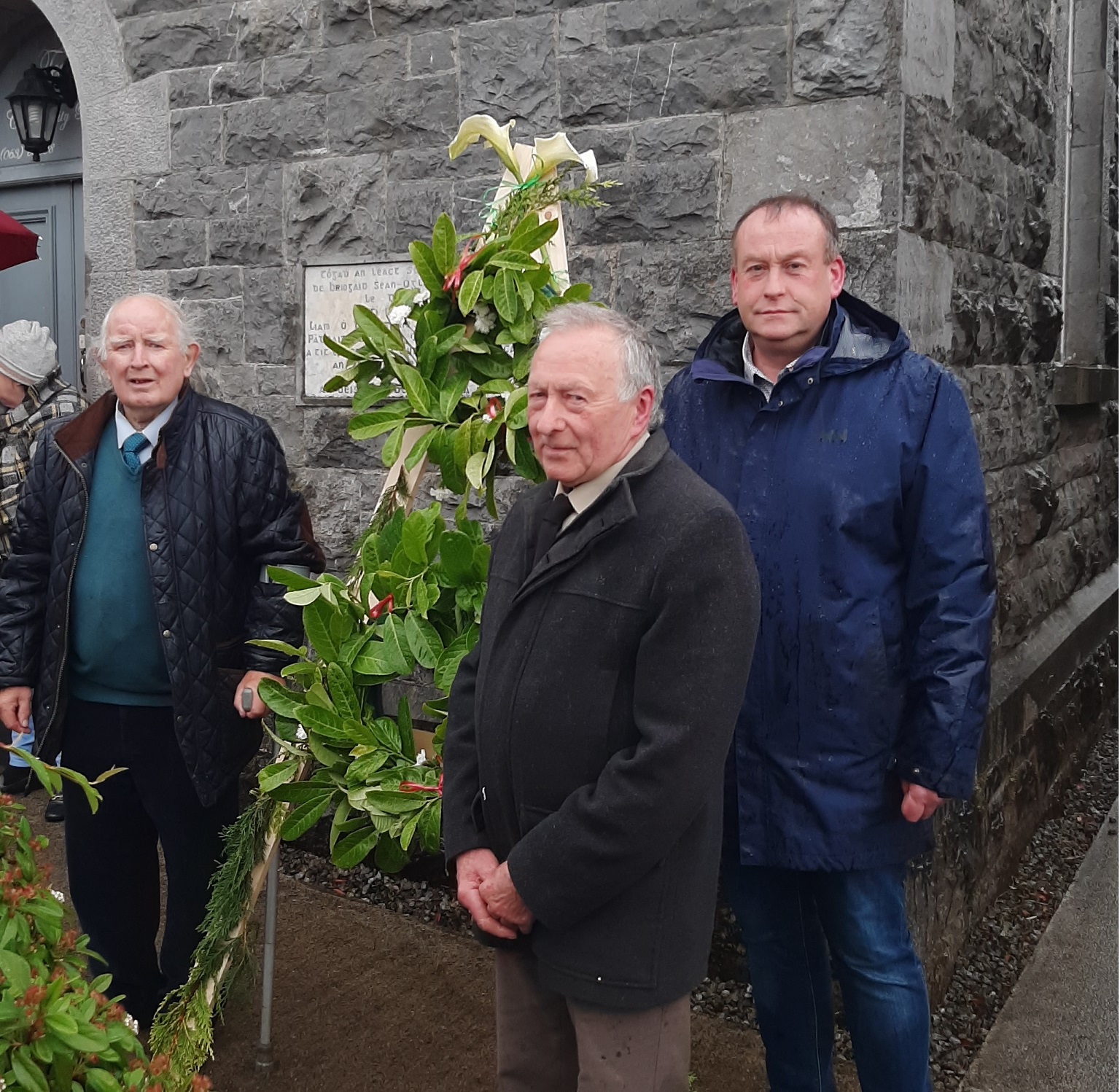 Relatives of the men who were killed and injured at the Burning of Dromcollogher Courthouse in 1920 laid wreaths to their memory at a ceremony at the site on the 100th anniversary of the tragic War of Independence event on Saturday, June 20. Danny Horan represented the family of his uncle Jack O'Farrell who survived the fire but lived with the effects of the severe burns he had received. Jerry McCarthy represented the family of David Brennan, and Brendan Danaher laid a wreath on behalf of Liam Danaher's family.

The details of the tragedy and its aftermath were recounted by historian Ger Greaney. Ger also thanked Anne Lordan of Teddy’s Playgroup, the current occupiers of the building, for permitting access to the site. Pat and Eileen Scanlon were commended for their work in preparing the event before Cyril Curtin led those assembled in a rendition of Amhrán na bhFiann. Poignantly, later that evening, a bouquet of flowers was laid at the door of the courthouse on behalf of the residents of Buckley Terrace and so it is that the name of Paddy Buckley does live on and is remembered in Dromcollogher. 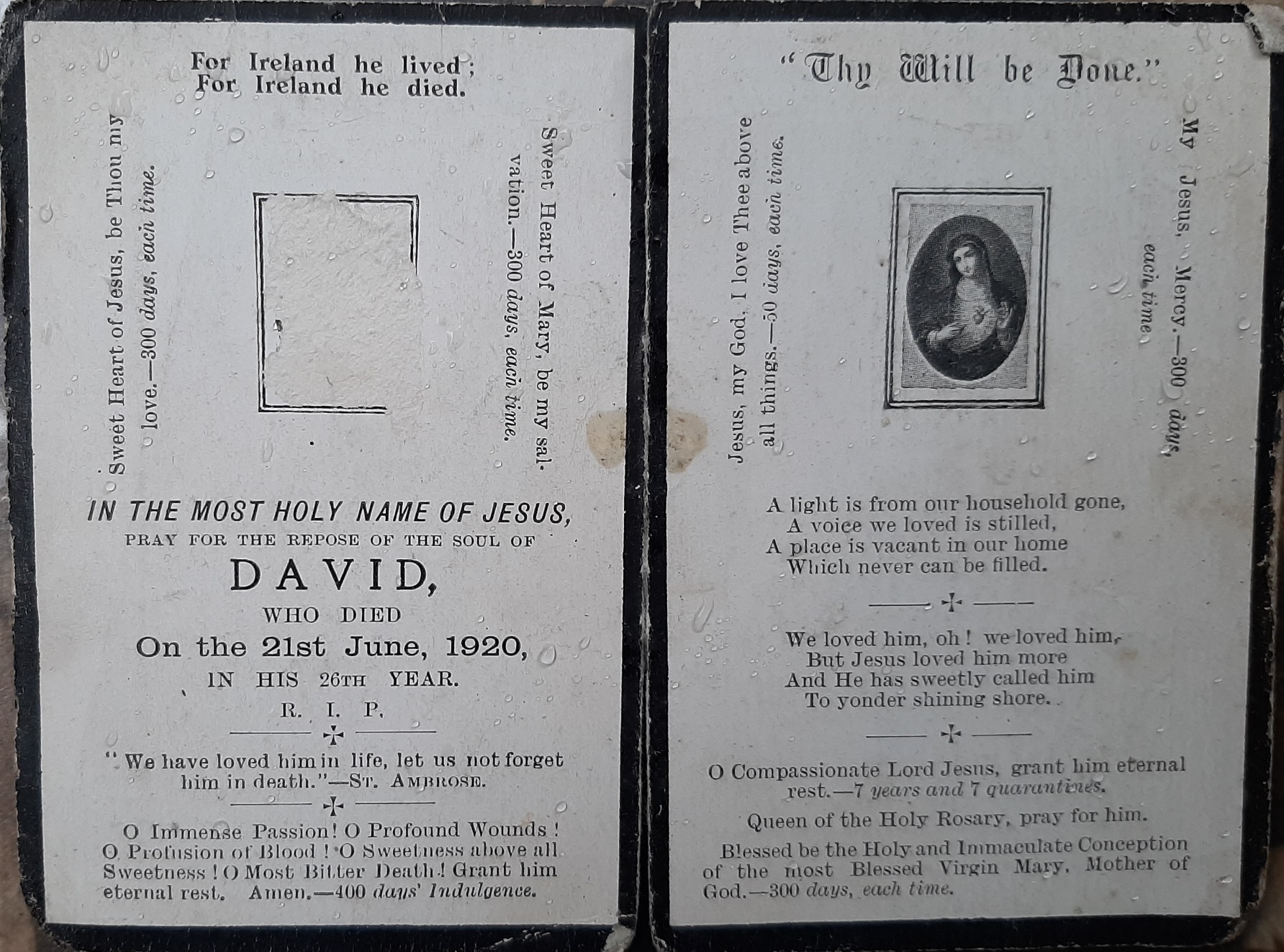 CourtHouse_100_01.jpg Wreaths. Flowers and Flag to commemorate the 100th anniversary of the Burning of Dromcollogher Courthouse and those that died there. 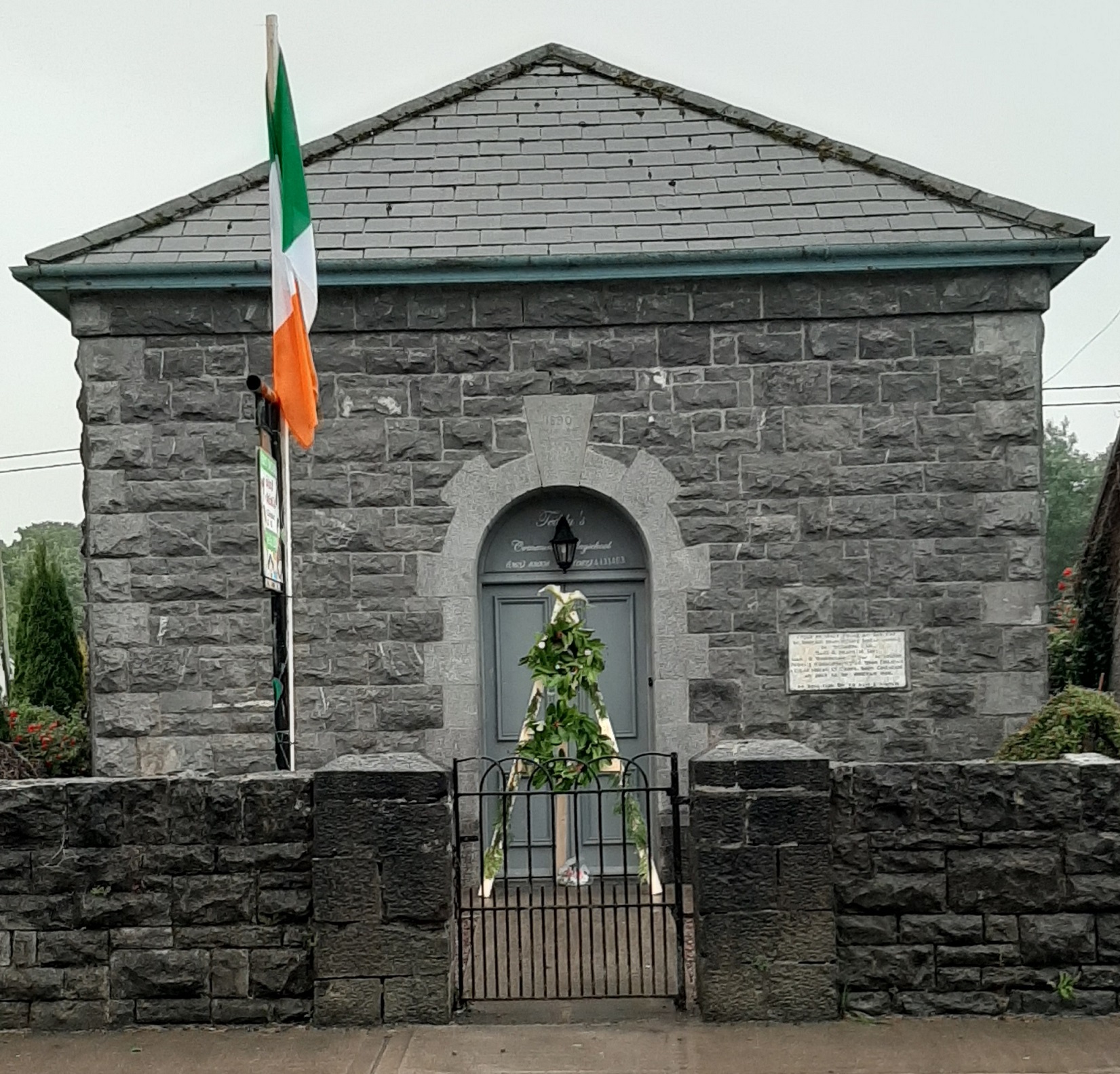 Wreaths, Flowers and Flag to commemorate the 100th anniversary of the Burning of Dromcollogher Courthouse and those that died there.