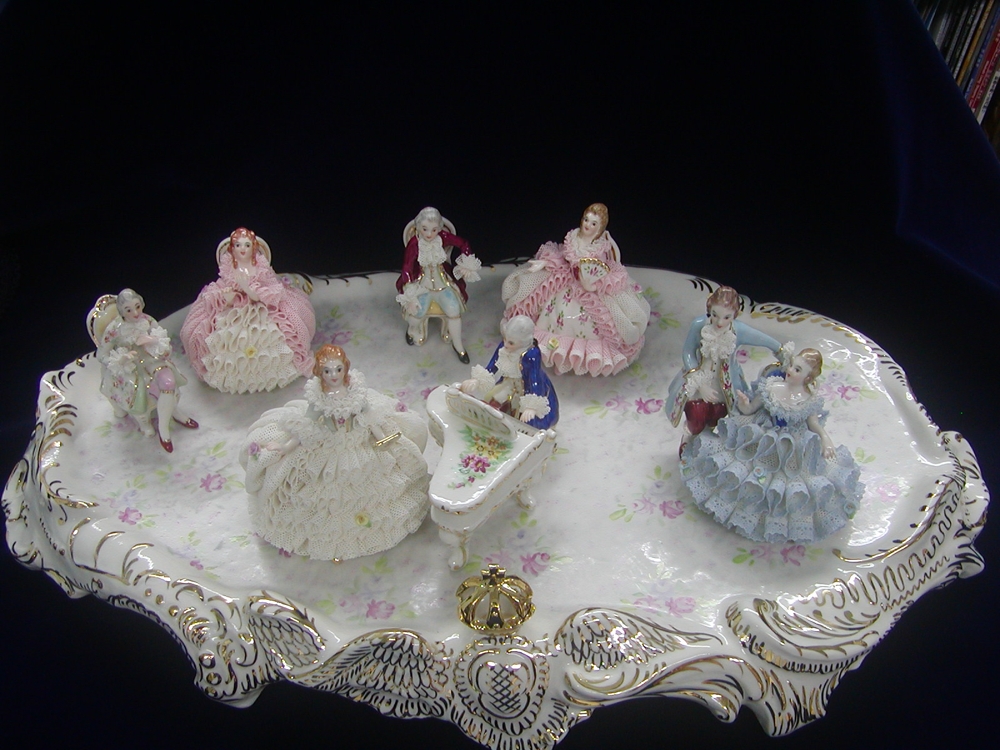 The story of Irish Dresden started in the German State of Thüringen, where in the early 18th century, the art of fine porcelain manufacture was a specialisation and within Thüringen, the town of Volkstedt was particularly renowned for its fine porcelain. By the year 1850, Volkstedt had further developed its repertoire when it began producing the famous lace figurines. “Dresden Lace” materialised through a process whereby real cotton lace was dipped in soft porcelain paste and then fired. The fabric burned away, leaving a fragile porcelain lace shell, which though delicate could withstand the test of time. 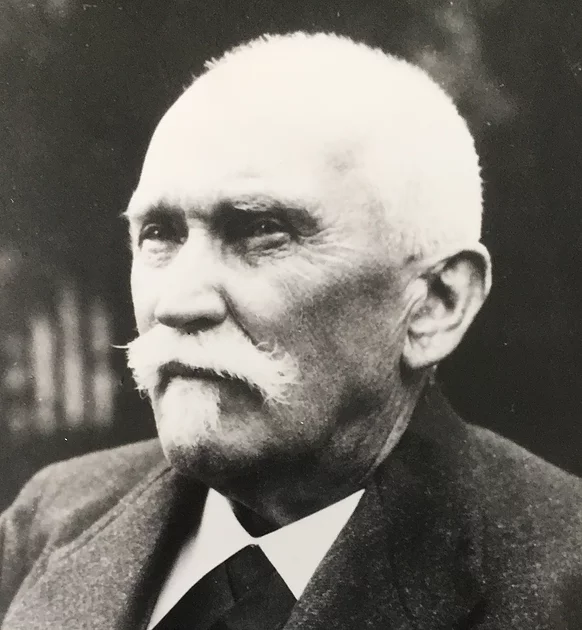 And within the town of Volkstedt, in the later 19th century, a certain artist and craftsman, Anton Mueller, began to gain special renown for his expertise in porcelain lace figurines. Anton Mueller was the great uncle of the existing Managing Director of Irish Dresden, Sabina Saar. While Müller was known more as an artist than businessman, nonetheless, because of the ever-growing popularity of his porcelain lace figurines, he finally bowed to commercial demand and in 1907, he established a manufacturing facility in Volkstedt. 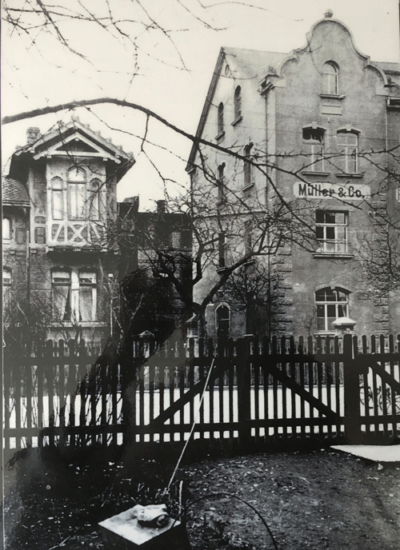 In the following years, his creations gained increasing recognition at the Count of Rudolstadt’s castle in Heidecksburg. 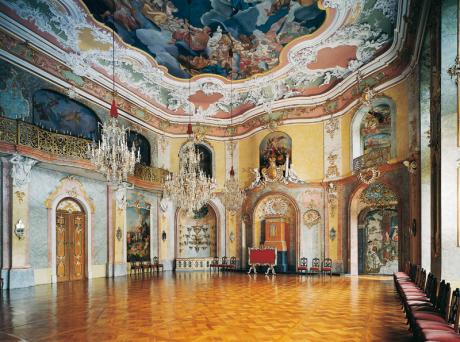 The opulent castle in Heidecksburg where the porcelain of Volkstedt was showcased as the White Gold of Thuringia..

Müller’s creations were identified by the trademark crown over the letters “MV” (for Müller Volkstedt). This trademark has persisted right through to the present day as the brand logo of Irish Dresden. There is indeed a lot of artistry in that logo. And there is even more history in the logo. 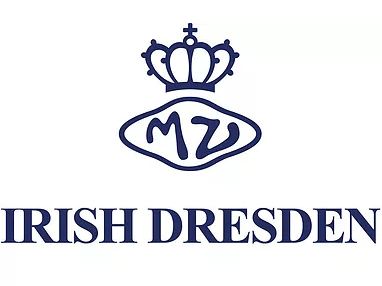 Although Anton Müller passed away in 1935, the business continued through his family. Then in 1945, the bombs rained down on Volkstedt and the Mülller factory was destroyed. Remarkably, however, some of the valuable old master moulds were found undamaged in the cellars below the ruins. Johanna Saar (mother of Sabina), and her husband Oscar, began the process of rebuilding the factory and by the following year, 1947, Müller-Volkstedt was again doing what it had always done best … producing unique lace porcelain figurines of the most exquisite quality. The re-birth of MV was to be short-lived. The Russian occupation in 1950 was an even greater challenge to the survival of the company. It was clear that MV could no longer persist in the town, which gave the company its name. Elaborate plans were made for the family to escape from this new threat. Oscar made his way to the Black Forest. Shortly afterwards, in the camouflage of the night sky, Johanna Saar loaded the family car with the most valuable original master moulds, and, driving through a mine-field, she somehow managed to successfully cross the border into West Germany. She had salvaged a crucial part of the MV heritage. Now she could only hope and pray that her children, who were being taken separately by other family members, would also successfully negotiate their way across the border. Finally, after a desperately anxious wait, the family was safely re-united. Even Sabina, who was a tiny girl at the time, can remember walking alone through the army checkpoints with Senta, her German Shepherd dog. To this day, Sabina believes that there was even then a sense of inevitability in preserving the destiny of the MV tradition. So with the Saar family re-united, and with the original moulds intact, they soon re-established the MV tradition in a small town at the edge of the Black Forest. They continued to produce Müller Volkstedt lace porcelain figurines there for the next decade or so. 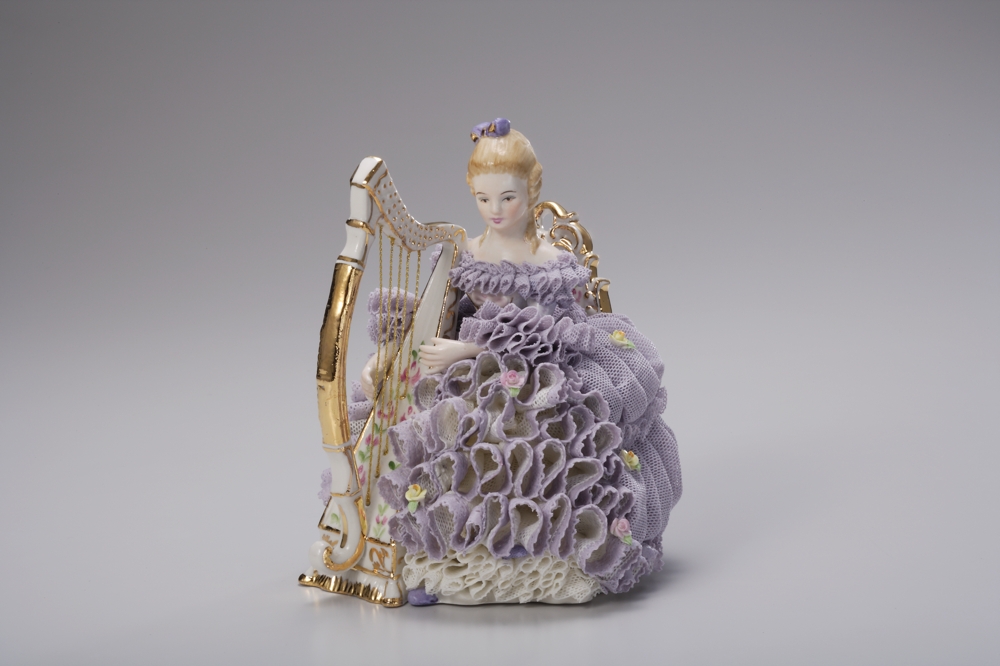 In 1960 the government of Ireland introduced a bill to attract foreign investment. The members of the Muintir na Tire organisation in Dromcollogher looked to Germany to bring employment to the locality which had seen the closure of operations at the local quarry and creamery. With translation by a German priest living in Limerick, they placed an advertisement in one of Germany’s biggest newspapers ‘Die Welt’ ( The World). The advertisement came to the attention of Oscar Saar. Diarmuid Riordan, founder of Southern Chemicals in Askeaton, travelled to a trade fair in Hanover where he met with Oscar Saar on behalf of Dromcollogher Muintir na Tire. Oscar agreed to set up a porcelain factory in Dromcollogher, provided that funding could be arranged. £20,000 was provided in three equal parts by Oscar Saar, the Irish Government, and Muintir na Tire in Dromcollogher. Locally the funds were raised through the sale of sixty shares at £100 each.

In 1962, the Saar’s were warmly welcomed by this small farming community, and it was not long before the MV figurines were being enthusiastically produced by the local crafts people under the expert tutorship of the Saar family. A small town in Ireland had given birth to Irish Dresden. The Saar’s settled quickly and easily into their new homeplace. However, tragically and somewhat ironically – as he had immediately fallen in love with Ireland’s unique outdoors lifestyle – Oskar passed away in 1968, just 6 years after the family had uprooted from Germany to start a new life in Ireland. It was a huge loss, but experience had taught the Saar’s, among other things, that life must go on, and Johanna and Sabina were soon again immersed in growing their business from Dromcollogher and in ensuring that the locals would continue to benefit from having a much-needed source of income to the community. 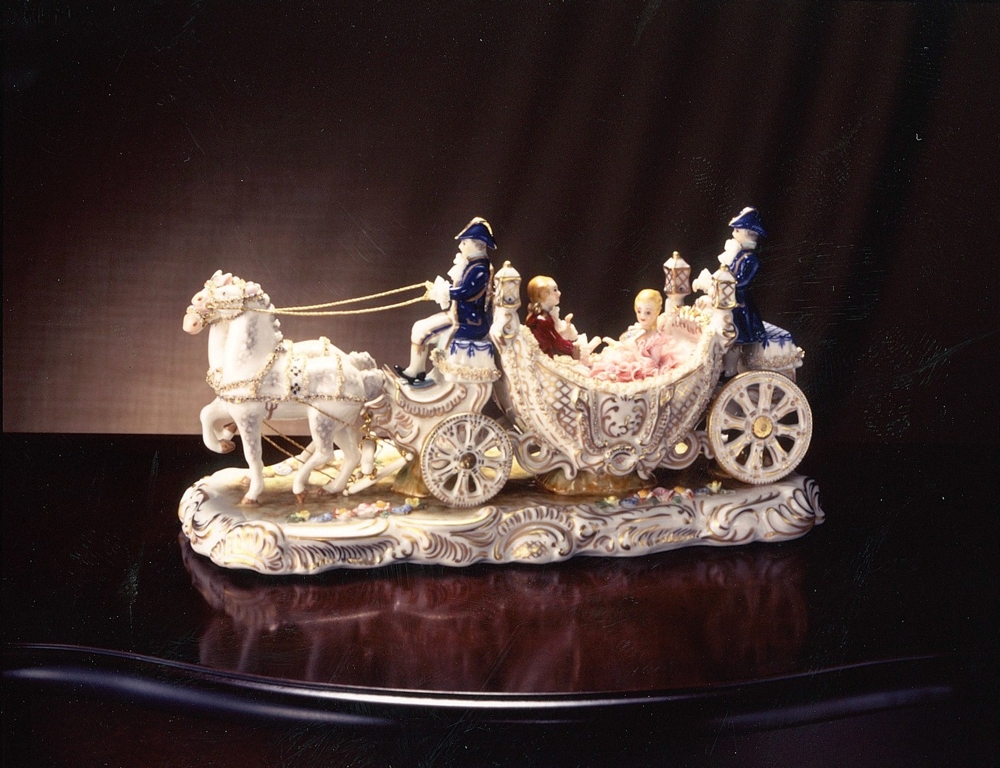 The rest, as they say, is history. The Saar’s have continued to preside over a flourishing business from their Irish base, and a production process, which has scarcely changed in a hundred years. In fact, such is the unique character of these porcelain lace figurines that it would be impossible to automate the production process. How can you automate a process, which combines the imagination of the artist with the skill of the craftsman? A process, which begins with an artist’s design, proceeds through various stages including air-drying, baking, impregnating real cotton lace with porcelain clay, glazing and baking again as the figurine shrinks and the lace material burns away, leaving its delicate pattern in the porcelain. And then, finally, the figurine being individually hand-painted and paint-fired to become the precious piece of fine art that is Irish Dresden. For some figurines, the process can take several months to complete. It is indeed a labour of love spanning weeks and months of creation and so many years of tradition. It is hardly surprising that all figurines are produced with the Saar’s aspiration that “Every unique Irish Dresden piece brings to its owner a sense of history, tradition, artistry, individuality, prestige and luxurious lifestyle” 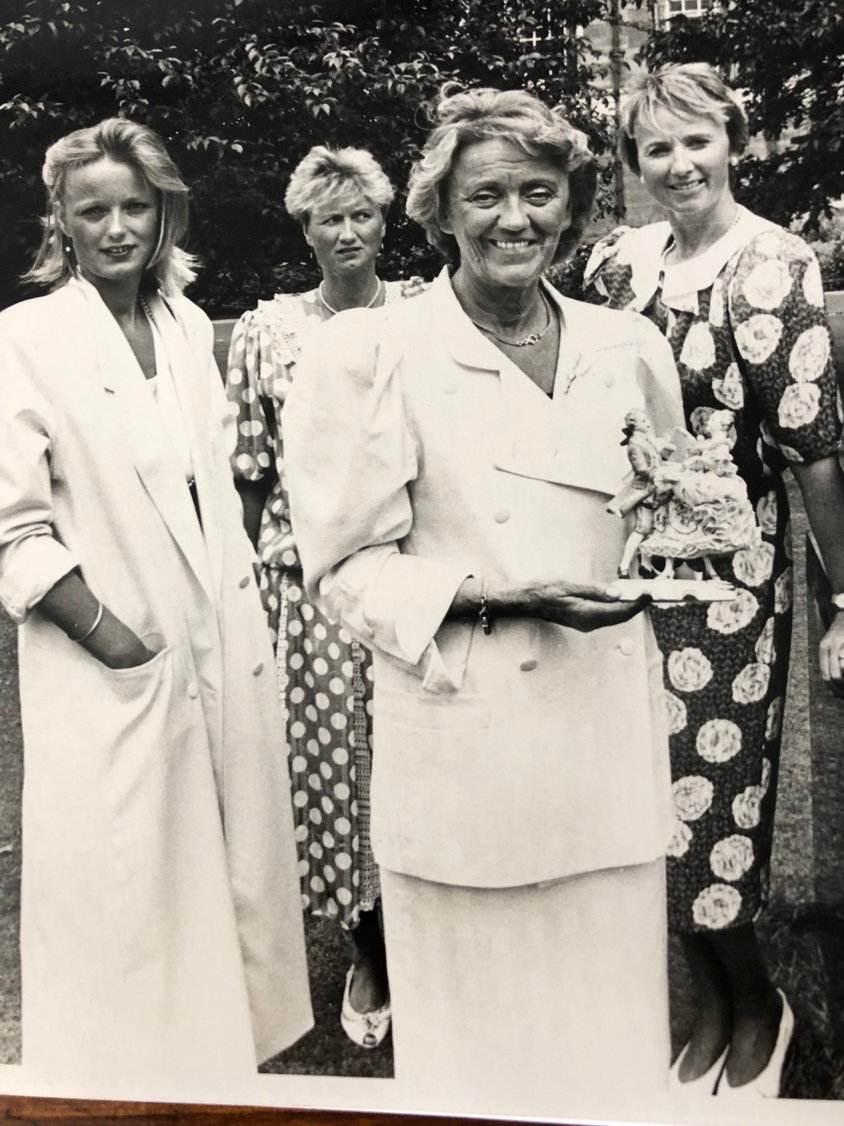 Johanna Saar passed away in April 2021, having lived for ninety eight active and fulfilled years. While history will record that Johanna Saar received various prestigious awards including “Businesswoman of the Year 1987”, perhaps the greatest accolade, which can be paid to the Saar‘s, is the fact that Johanna and Sabina, in the face of all sorts of adversity, managed to keep alive the precious MV tradition for consumers all over the world to enjoy. 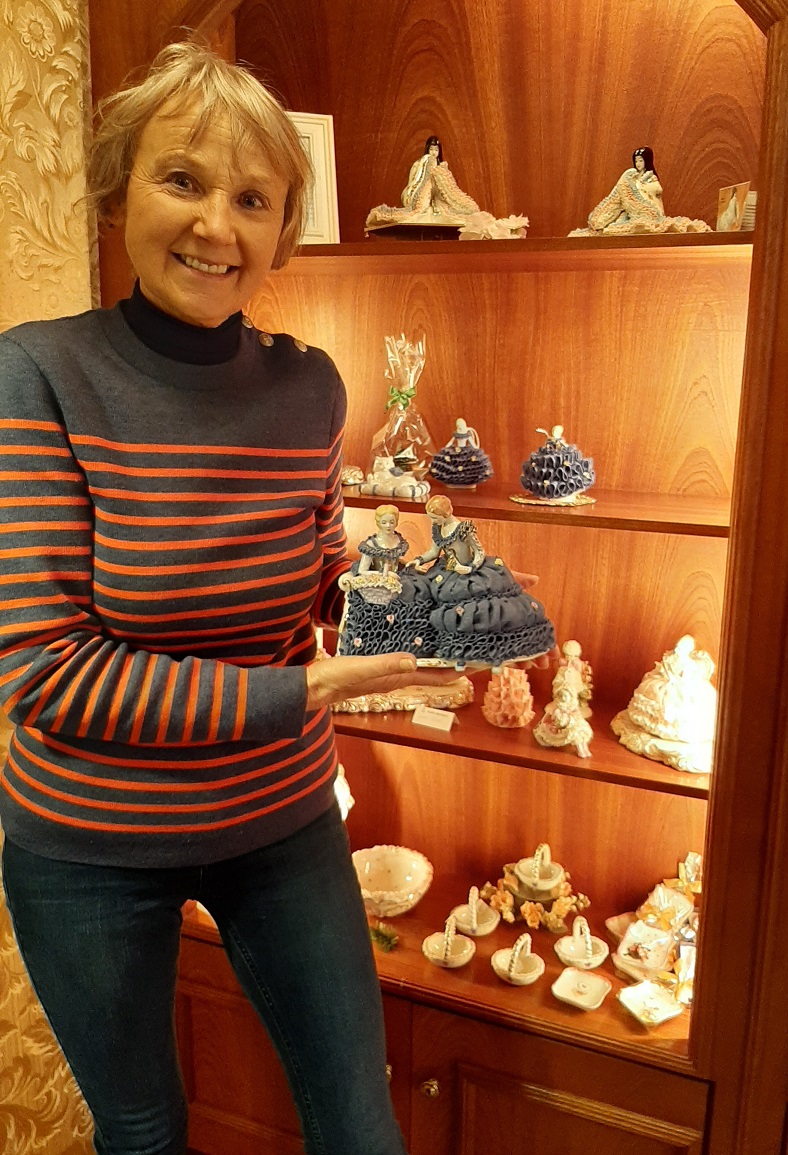