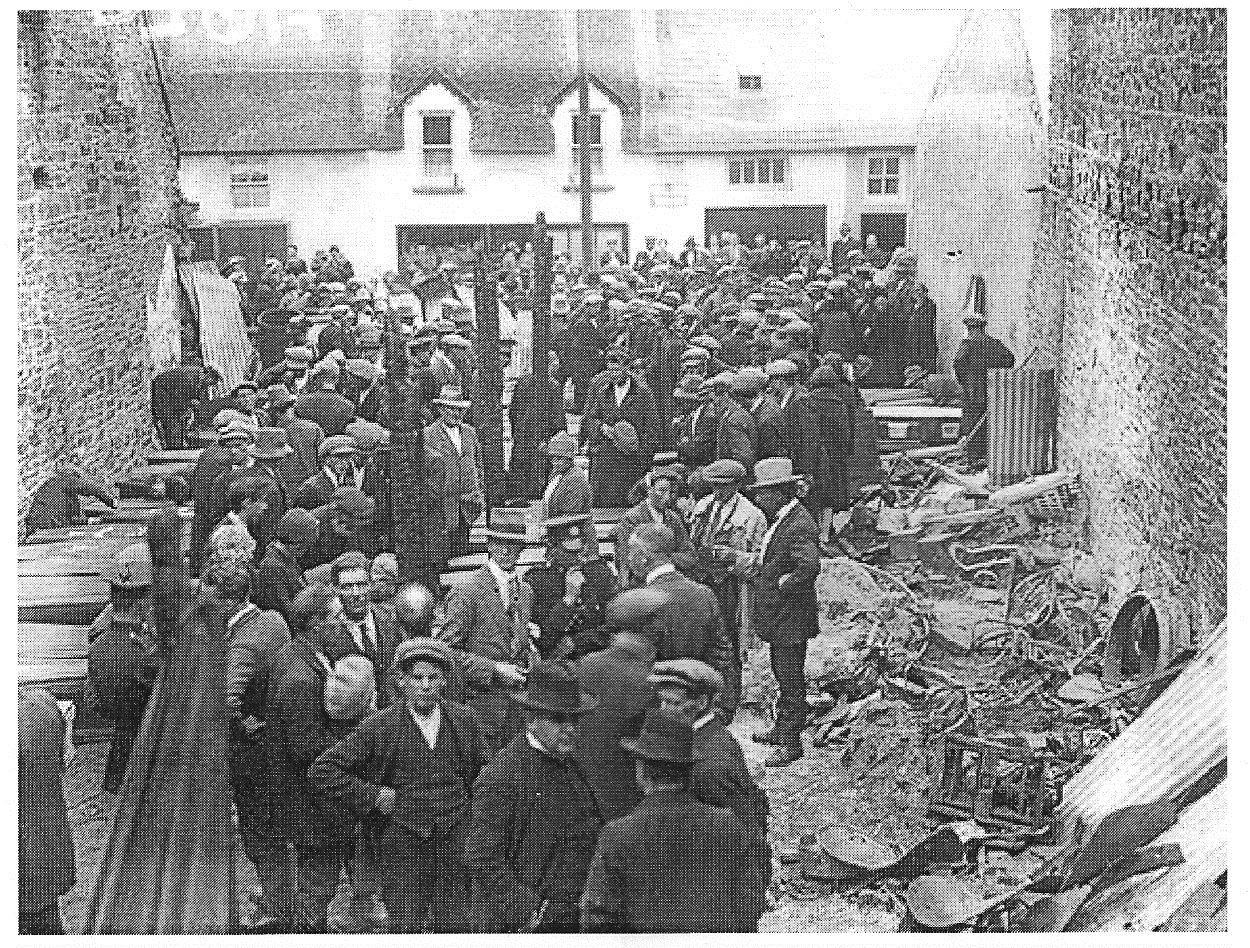 48 men, women and children lost their lives when a terrible fire swept through the upstairs loft that served as a temporary cinema at this location on the night of Sunday, 5 September 1926.

This public library here stands as a memorial to the 48 people who lost their lives on this site in what became known as the Dromcollogher Cinema Disaster of 1926. On the night of Sunday September 5 th , 1926 at 9.15pm, the showing of a film was to take place here in the upstairs loft area of a store belonging to a local hardware shop. The time was chosen so as to allow people attend Sunday night Benediction in the Church, which many did. The films on show were to be a short film called ‘False Alarm’ and the main film called ‘The Decoy’. With a small yard area to the front, the exterior of the store facing the street was made of timber and zinc sheeting. There was a large and a smaller door at ground level. There was only one window and this was broken and patched over. There was also a door at a higher level with a steep ladder/stair leading up to it with a banister. The other three walls were stone. The roof was actually a wood and felt construction. There were some small windows at the back which were barred. 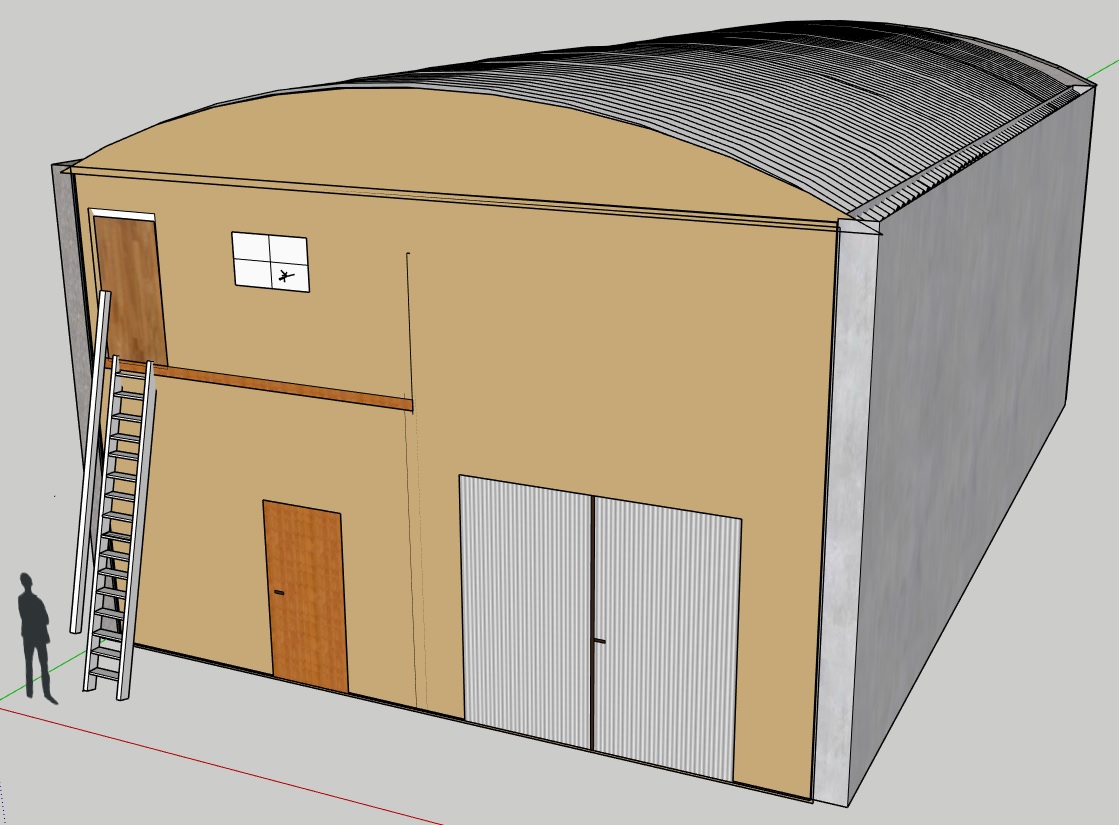 What served as the cinema was an elevated L-shaped loft, constructed in the store owned by local hardware merchant, Patrick Brennan. In fact it was used as a general purpose hall that was frequently used for dances, dramas, shows, and meetings. The structure was a timber floor supported on the wooden pillars from the ground floor. It had a timber partition running from the front wall down its full length until just 9 feet short of the end wall where the section on the ‘L’ served as a dressing room. On the other side, there was timber wainscoting on the length of the wall. The space then was 50 feet long by 15 feet wide and it was 12 feet above the floor of the store and the ground outside. There was no access to the space except from a single door in the front wall, about 6 feet by 3.5 feet and accessed from the ground by a steep wooden ladder/stairs. 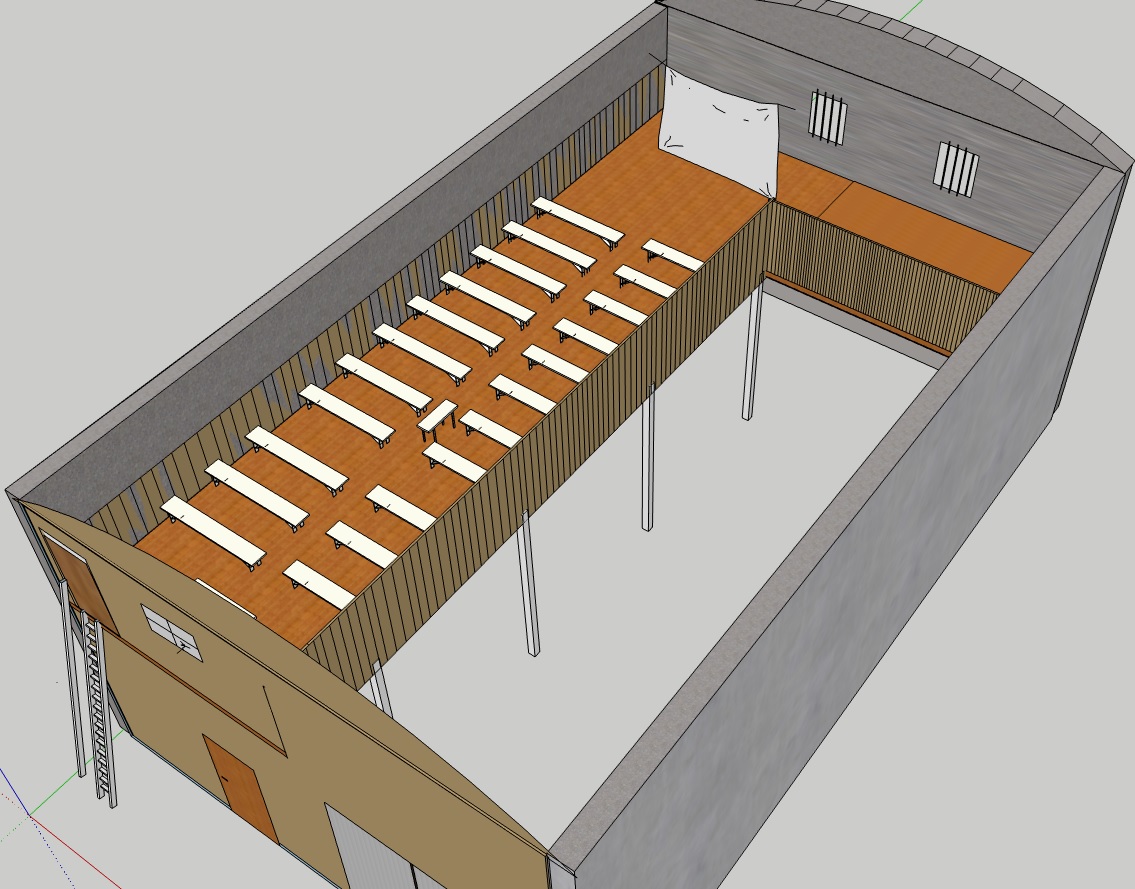 The showing of films here was the brainchild of local man William ‘Babe’ Forde. An entrepreneurial man, determined to overcome his physical frailties, Forde struck up an arrangement with Patrick Downing, projectionist in a Cork cinema. The films were ‘borrowed’ from the Cork venue where cinemas didn’t operate on Sundays and brought to Dromcollogher. The projector was set up and on the night 150 men, women, and children crammed into the hall to see Babe Forde’s film show paying nine pence for the privilege. 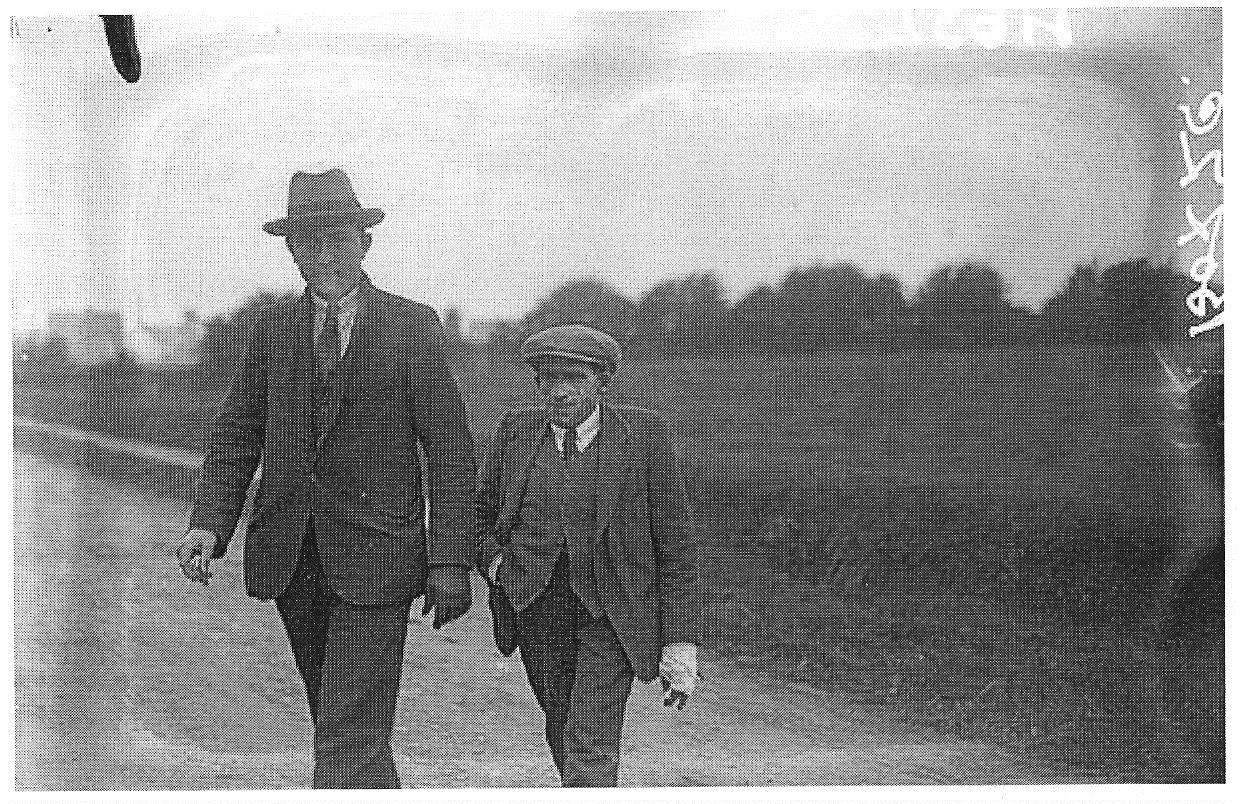 During the showing of the second film at ten minutes to ten o’clock a lighting candle fell upon the highly flammable Nitrate Film reels. The fire spread rapidly from the table, across the floor to the partition and the wainscoting, setting up a dense mass of smoke and fumes. Many of the crowd rushed the small exit, carrying with them the burning reel which landed near the ground where it set fire to the stairs/ladder, blocking the only exit. Most of the people ran in the opposite direction to the dressing room. Here someone managed to prise open the bars on the window and some people managed to jump out on to some cocks of hay, which then also caught fire. When a portly woman got stuck in the window, this avenue was also cut off. After just 10 or 15 minutes the roof fell in, the floor gave way and all within were lost.

A vigil was kept through the night and the pubs were closed down. When dawn broke, the task of separating and identifying the charred remains began. 46 people had died that night as determined by a count of skulls. 2 more were to die within days. Most of the bodies were found in the corner under that part of the hall that served as the dressing room. All the remains were placed in coffins and it was decided that all were to be buried together, in a mass grave, in the grounds of the Church. 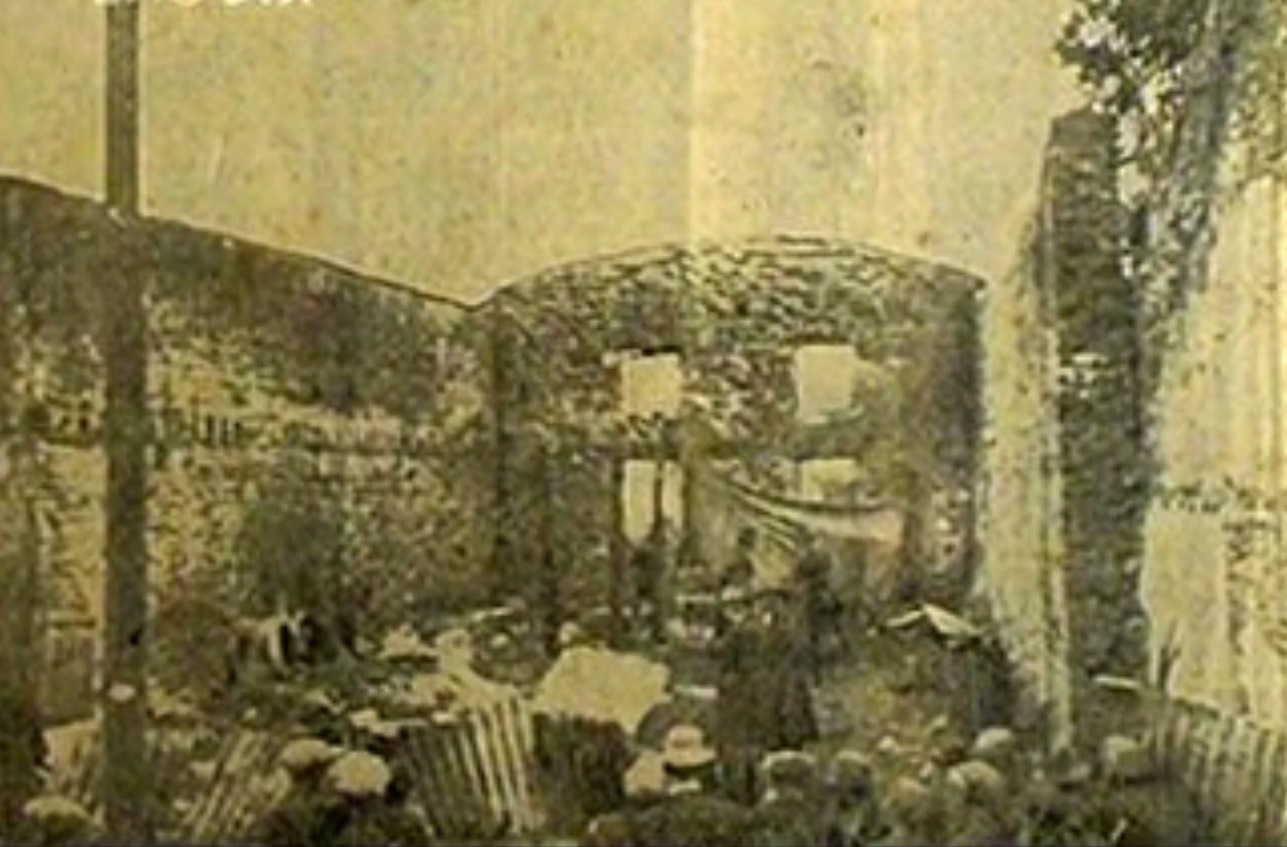 This is a very grainy reproduction from a newspaper, but it is probably the first picture to be taken early on Monday. There are no coffins yet brought on-site.

Later in the day, a pensive crowd is gathered on the site. This is a view from the back of the store, possibly taken from one of the small windows at the rear. It is looking out through the site, on to Church Street. You can see the charred pillars that had supported the loft area. By now the remains had been placed in coffins, which had been delivered on two trucks by the army. 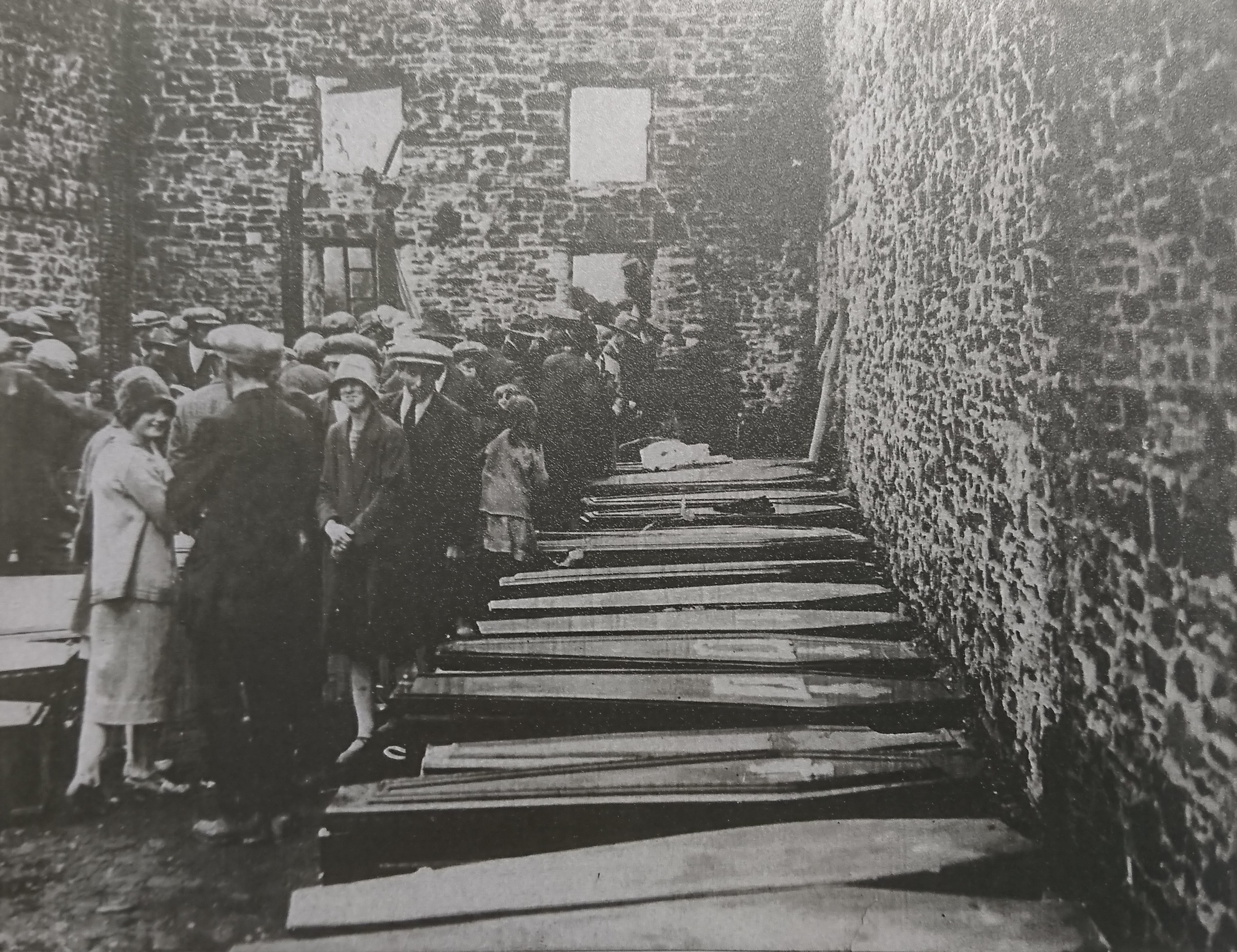 This picture was taken on the Monday after the remains had been placed in the rows of coffins but before the removal to the Church. Again it can be seen that nothing of the structure remains but the bare stone walls and the charred pillars. 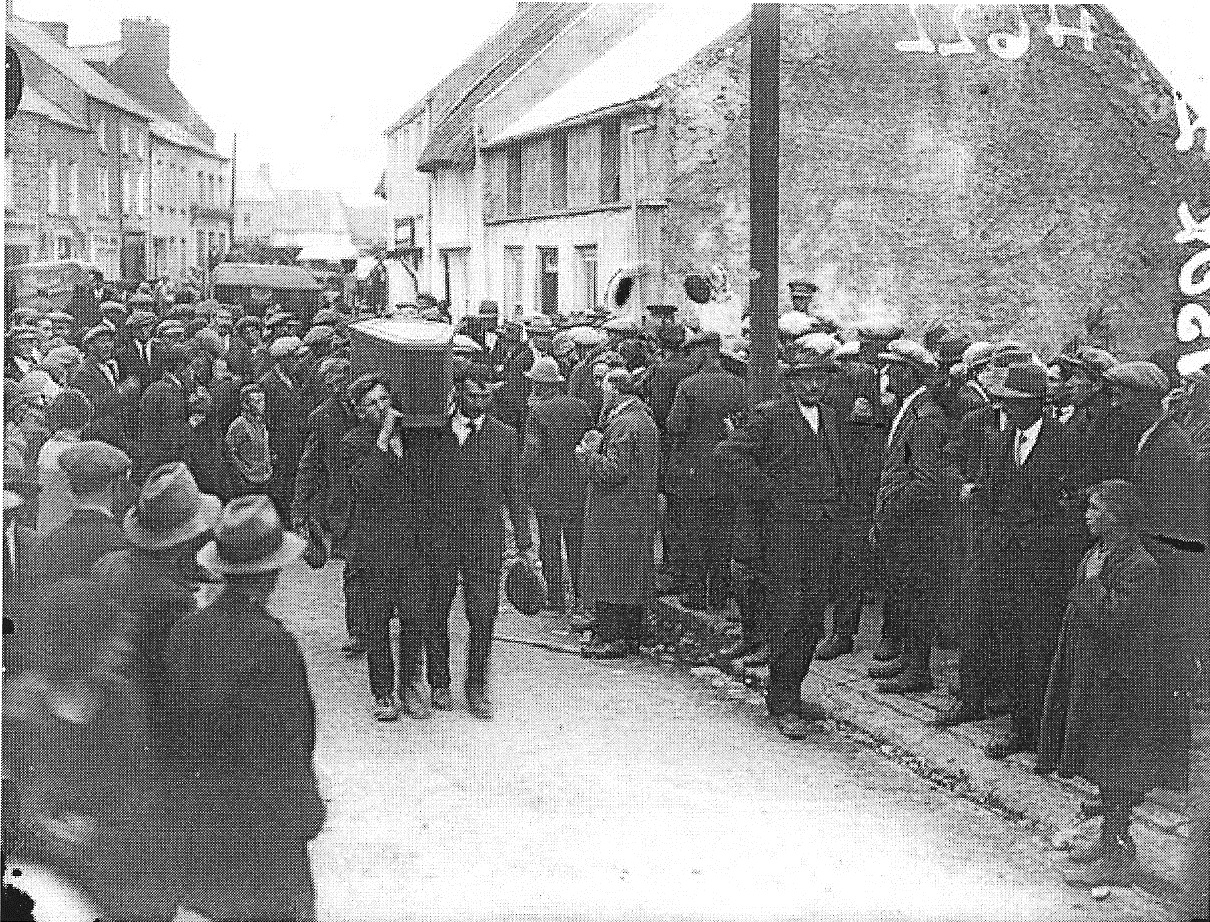 The funeral was attended by President WT Cosgrave and presided over by Canon Begley with Bishop Keane of Limerick and over 50 other priests from Limerick and Cork also attending. Condolences came from far and wide including King George of England, other heads of state, church leaders, trades union and county councils. A relief fund was set up which made its last payments in 1958. 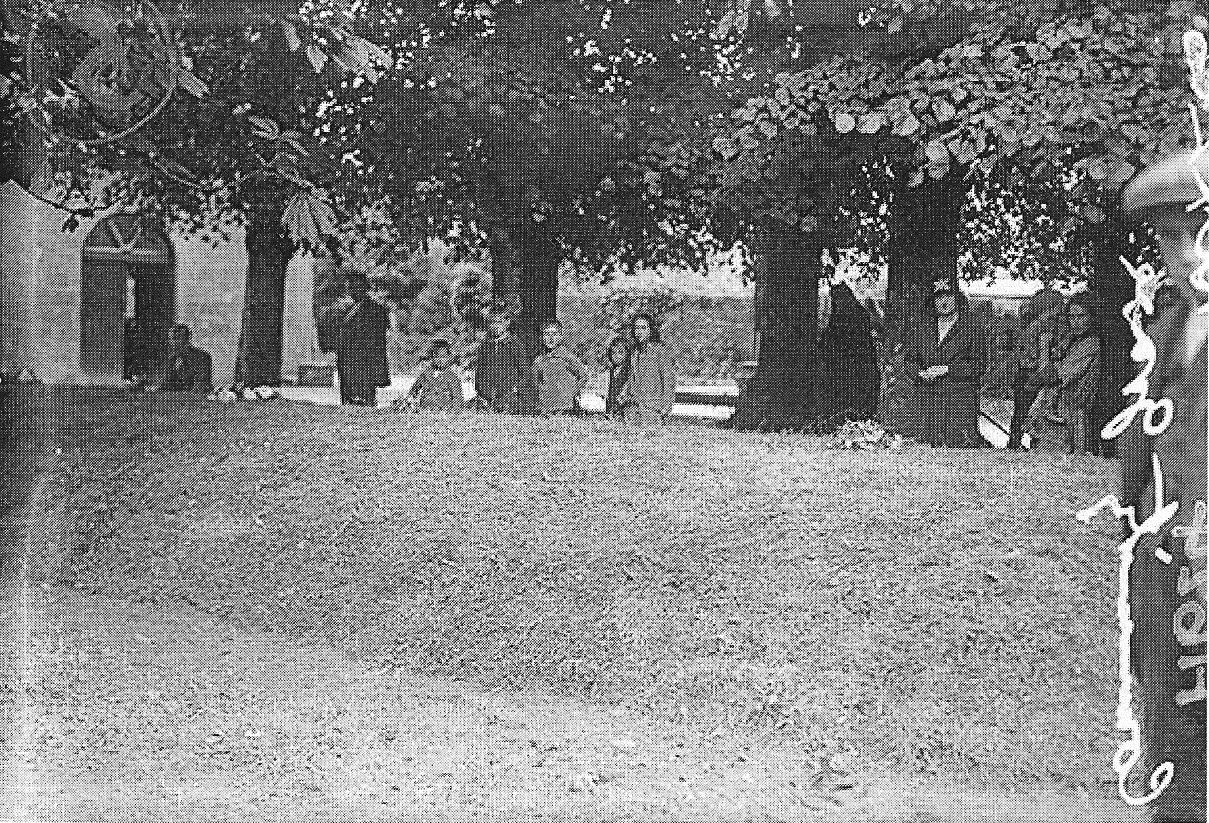 This gives some sense of the scale of the grave. 30ft long by 10ft wide and 3ft high, covered in green sod and interspersed with floral tributes. The front door of the church is in the background. 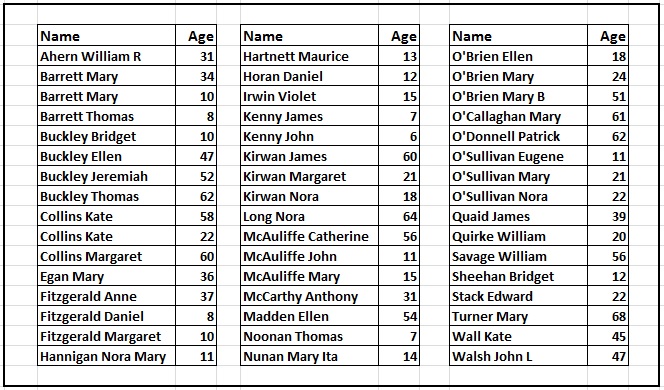 These are the Names of the deceased as they are listed on the three faces of the Celtic Cross that stands over the grave. Their ages are also included showing the great loss of young life in this disaster.

Brennan the store owner, Downing the projectionist, and Babe Forde were all charged with manslaughter but ultimately the cases were not proceeded with. Brennan lived on in Dromcollogher and was shown no animosity. Downing returned to Cork where he died in 1950’s. Babe Forde emigrated to Australia where he found work with two other men in the outback engaged in exterminating rabbits. Forde mistakenly used the arsenic powder for poisoning rabbits, instead of baking soda in making bread. ‘Babe’ Forde died a horrible death on the other side of the world, three years after he had attempted to become a cinema operator, in Dromcollogher in 1926. 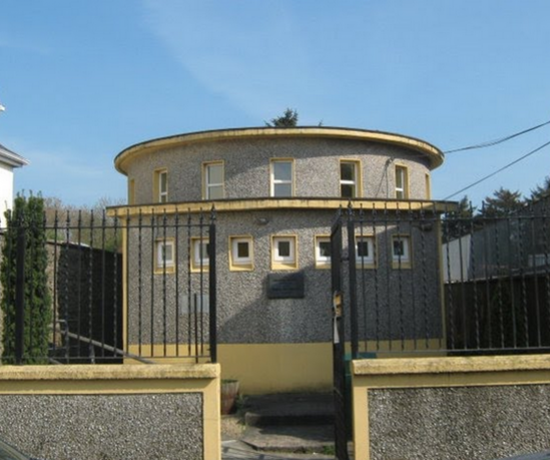 The site of The Burning lay boarded up and derelict for over 20 years when a local committee was formed and raised funds to buy the site. Together with Limerick County Council they agreed that the site should be preserved or serve as a memorial. In 1953 a structure, unique for its time, circular with flat roof and tall narrow windows was opened as a Memorial Library.