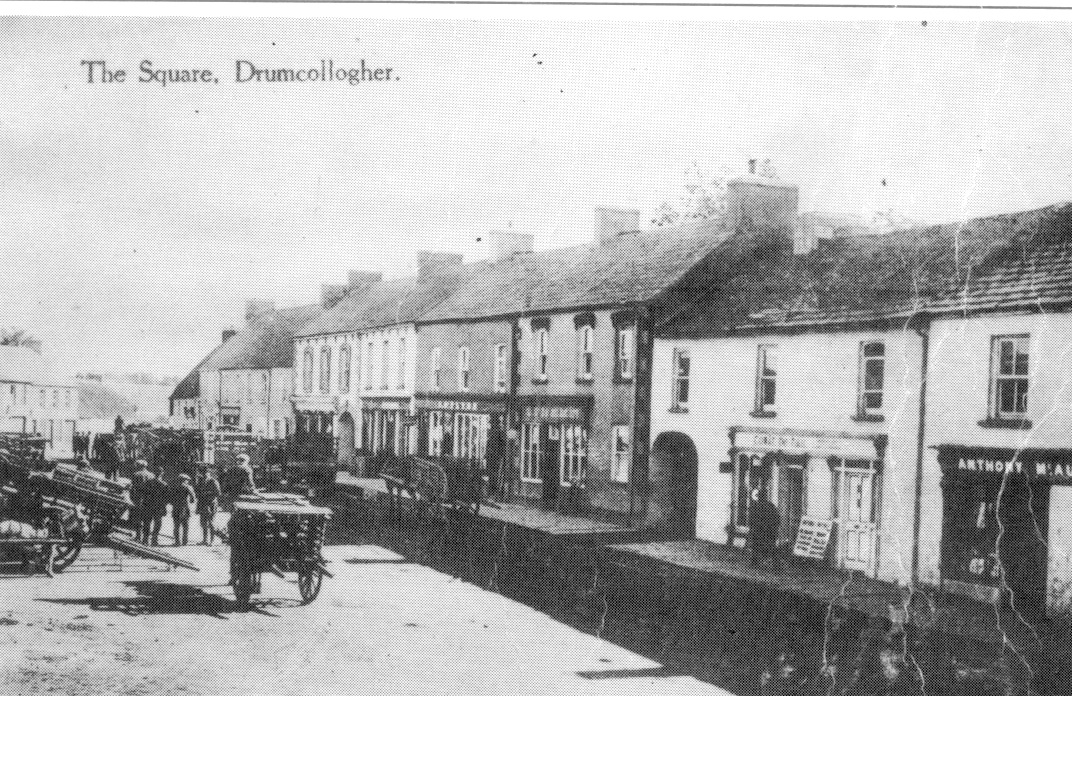 Dromcollogher has a very long association with cattle trading, so much so that it is written into our landscape. A former master of the Boys School in Dromcollogher and long since gone to his reward, Danny O'Callaghan was keenly interested in the history of his native Dromcollogher. During some of his classes on the subject of local history, Master O’Callaghan reckoned that many centuries ago, because of its position right where the plain of County Limerick meets the countryside that rises into North County Cork, Dromcollogher was a centre for trade between the farmers from these lowland and upland hinterlands. Furthermore it was his view that this trade took place at a ford on the local river and that then, the river took its name from this practice. The name shown on maps today as “Ahavarraga” comes originally from the Irish “Atha an Mhargaidh” - The Ford of the Marketplace. 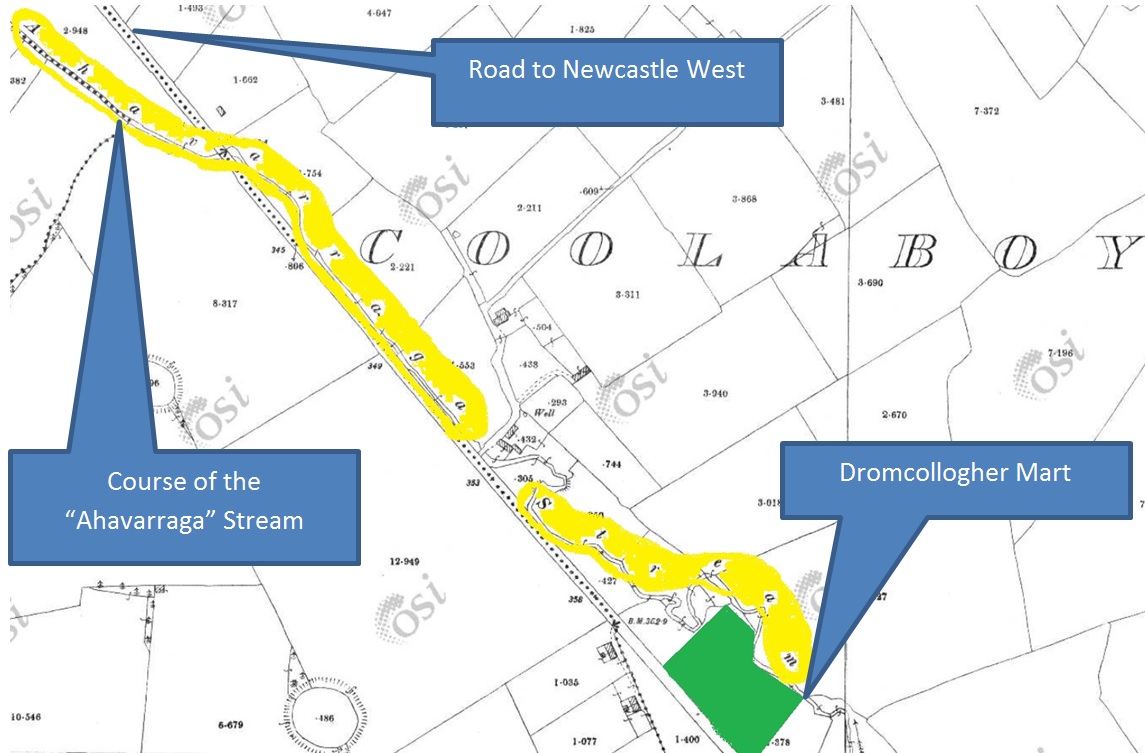 The course of the Ahavarraga through the townland of Coolaboy as it passes the location of Dromcollogher Mart. 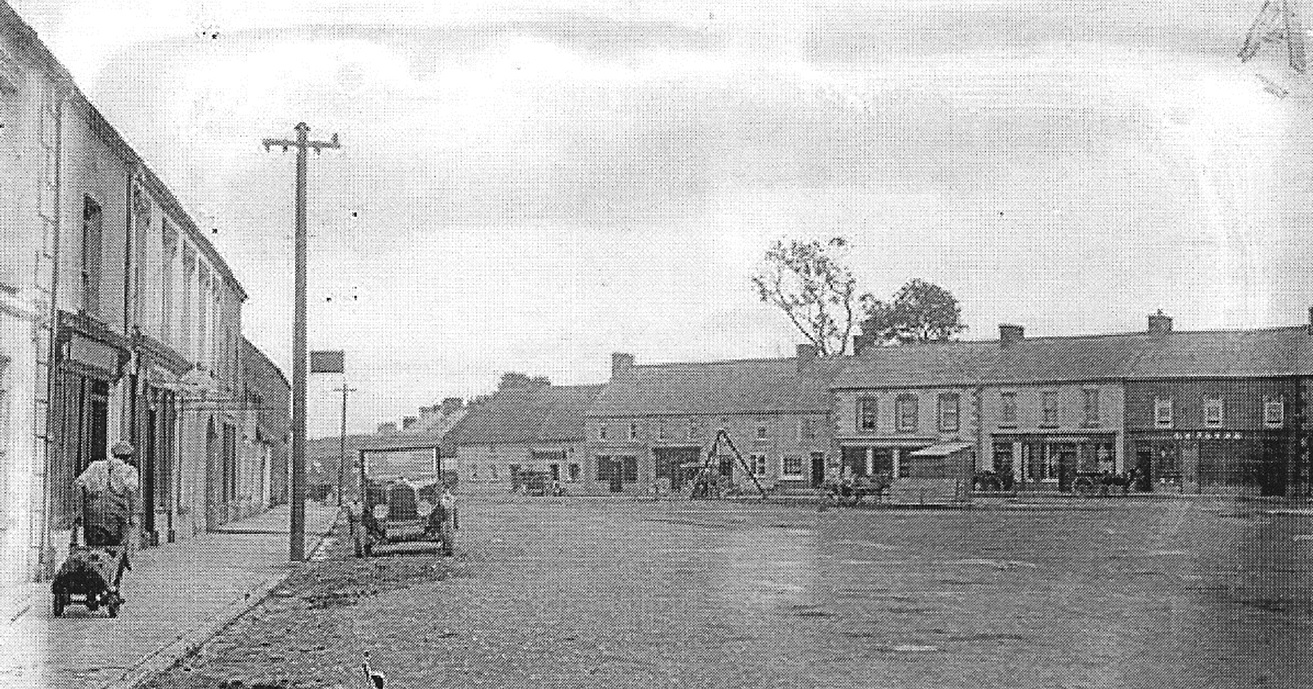 A view of the Market Place in Dromocollogher in bygone days.

Reflecting the centrality of markets and fairs to the existence of the town, the 1888 – 1913 25 inch Ordnance Survey map labels the heart of Dromcollogher as the “Market Place” not The Square as it is known today. Pound Street in the town also takes its name from the yard or enclosure that was once located there for impounding stray cattle after fair days, again showing how markets and fairs were written into the very landscape of Dromcollogher. 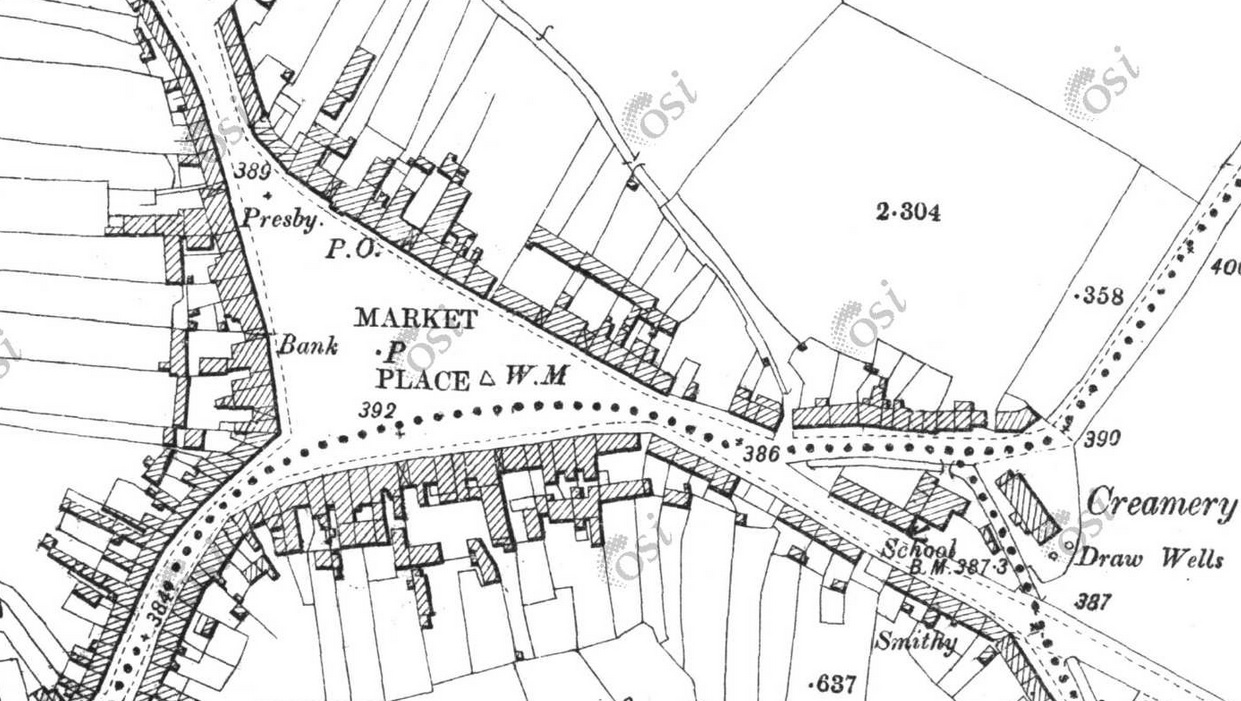 From 1850 to 1900 the distribution of fairs in county Limerick changed significantly with fairs being held more frequently but in fewer locations. 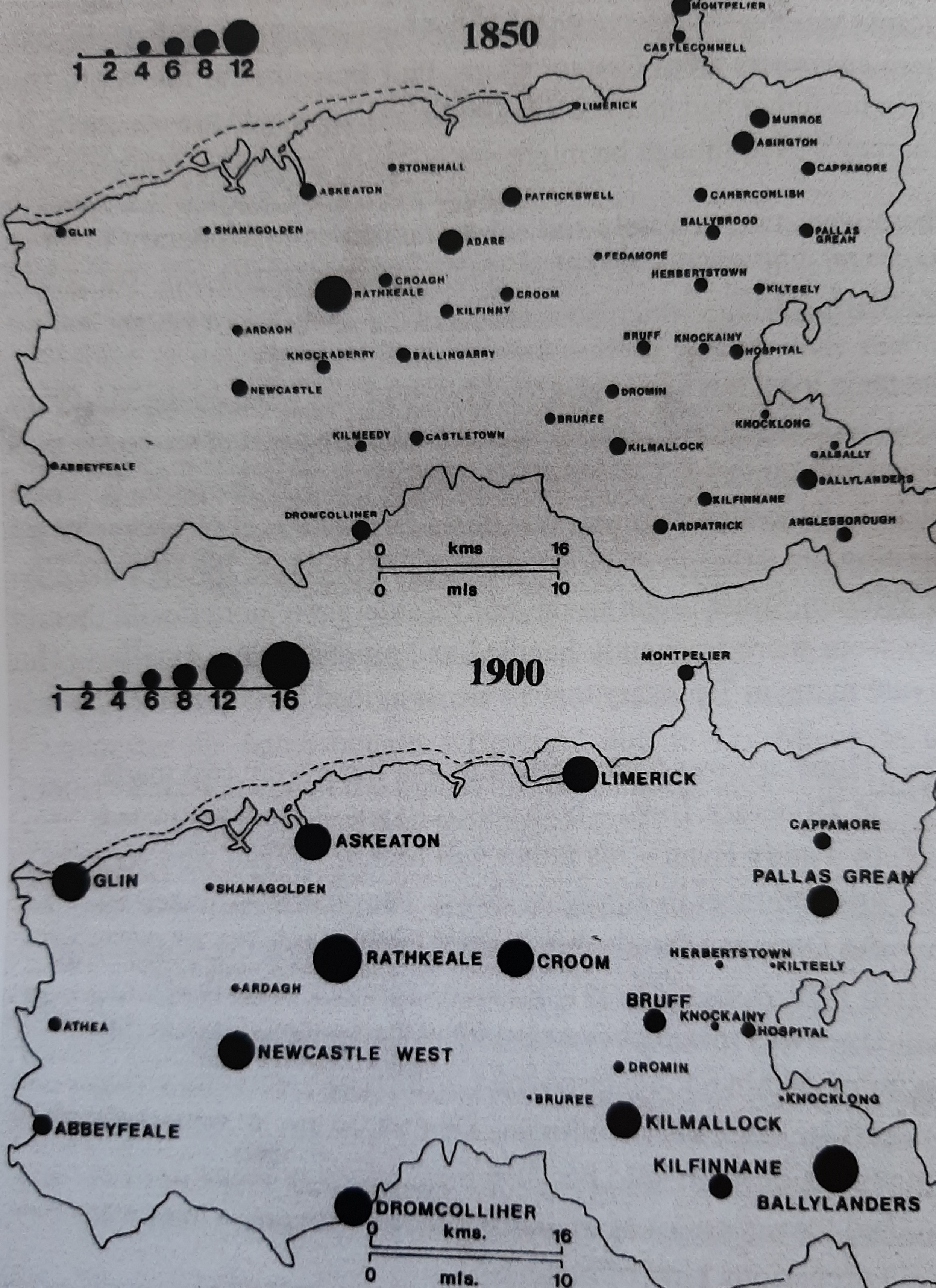 Representation of the changing distribution of fairs on county Limerick during the second half of the nineteenth century.

A view of a Fair Day in Dromcollogher.

In the 1950s and '60s, many fair days were extinguished and cattle sales moved from open fair green trading to the enclosed confines of the Mart. Marts grew in popularity as more organised minds edged the Irish cattle trade forward.

Dromcollogher Mart Co-op Society held its first sale on October 5, 1967. The committee that established the Mart in Dromcollogher included Tom Stack and Canon Hugh O’Connor as well as John Clarkeson, John Savage, Eugene O’Sullivan, Jim Noonan (Feenagh), Tadhg Dwane, Michael McAuliffe (Kilmeedy), Ton Twomey, and Donal O’Sullivan with Seamus Stack as the organising secretary. The site for the new mart was in a field bought from a Mr Geary for £2,500. 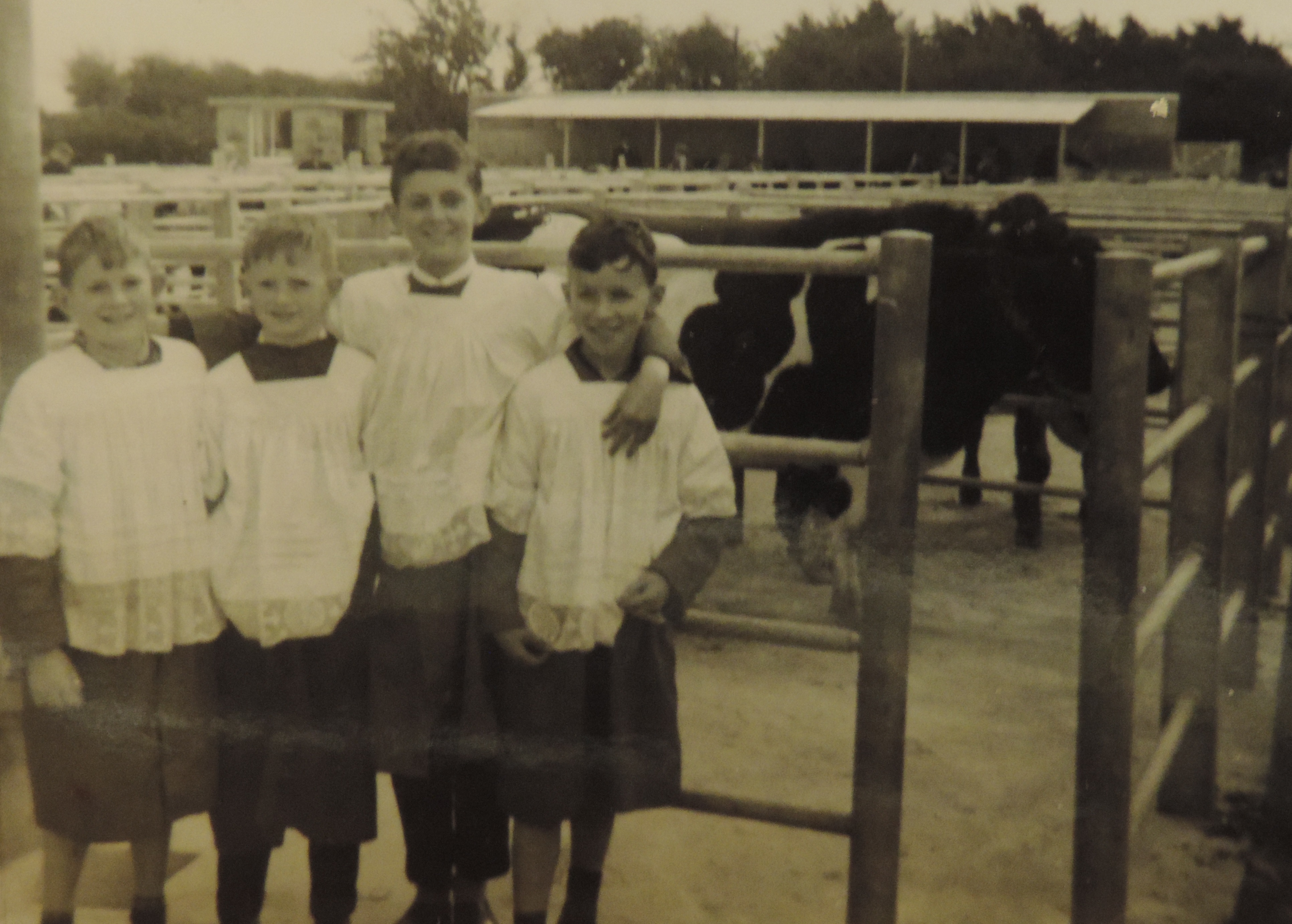 At the first weanling show and sale held at Dromcollogher Co-op Mart in 1970 (left), Mr Gunning, Manager of the Munster and Leinster Bank, Dromcollogher presents the trophy for the best bull calf at the show to Patrick Keane, Moyge, Liscarroll, Co. Cork and (right) Seamus Stack, Manager of the Mart, presents the trophy for the best heifer calf at the show to John White, Newtown, Charleville.

The original Mart building had two sales rings with open pens. The pens were subsequently roofed, a canteen built, and a shed for pigs was added. Following a period of independent operation, negotiations between Golden Vale Mart and Dromcollogher Mart Co-op Society saw the mart reopen in 1978.

A portion of the original building has now been acquired for use by the neighbouring steelworks. Calf sales continue to be held here each year during the spring season.

After Fairs were consigned to history, they were replaced by Marts and over the years, Marts were themselves subject to closure and consolidation. In County Limerick in 2021, the Marts that remain, as operated by GVM are Kilmallock, Abbeyfeale, and Dromcollogher.

Kilmallock, Co. Limerick: GVM opened its first Mart in Kilmallock in 1958 and Kilmallock is now one of the largest in the country.  Its weekly cattle sale is held on Mondays with five auction rings in operation.  It also holds Society Sales and Organic Sales during the year.  Kilmallock is particularly noted for the quality, quantity and range of stock on offer.

Abbeyfeale, Co. Limerick: GVM has operated in Abbeyfeale since the early 1970’s. Abbeyfeale operates on Saturdays and is particularly noted for the quality of its calf sales. A renowned calf fair was held in Abbeyfeale from olden times until the 1970’s and Abbeyfeale has continued this tradition of excellence.