Dromcollogher Vocational School opened here in 1941. Later known as The Community College, it moved to a new greenfield site and became Hazelwood College in 2002. The school then became An tIonad Glas, The Organic College, which was founded here in 1992. 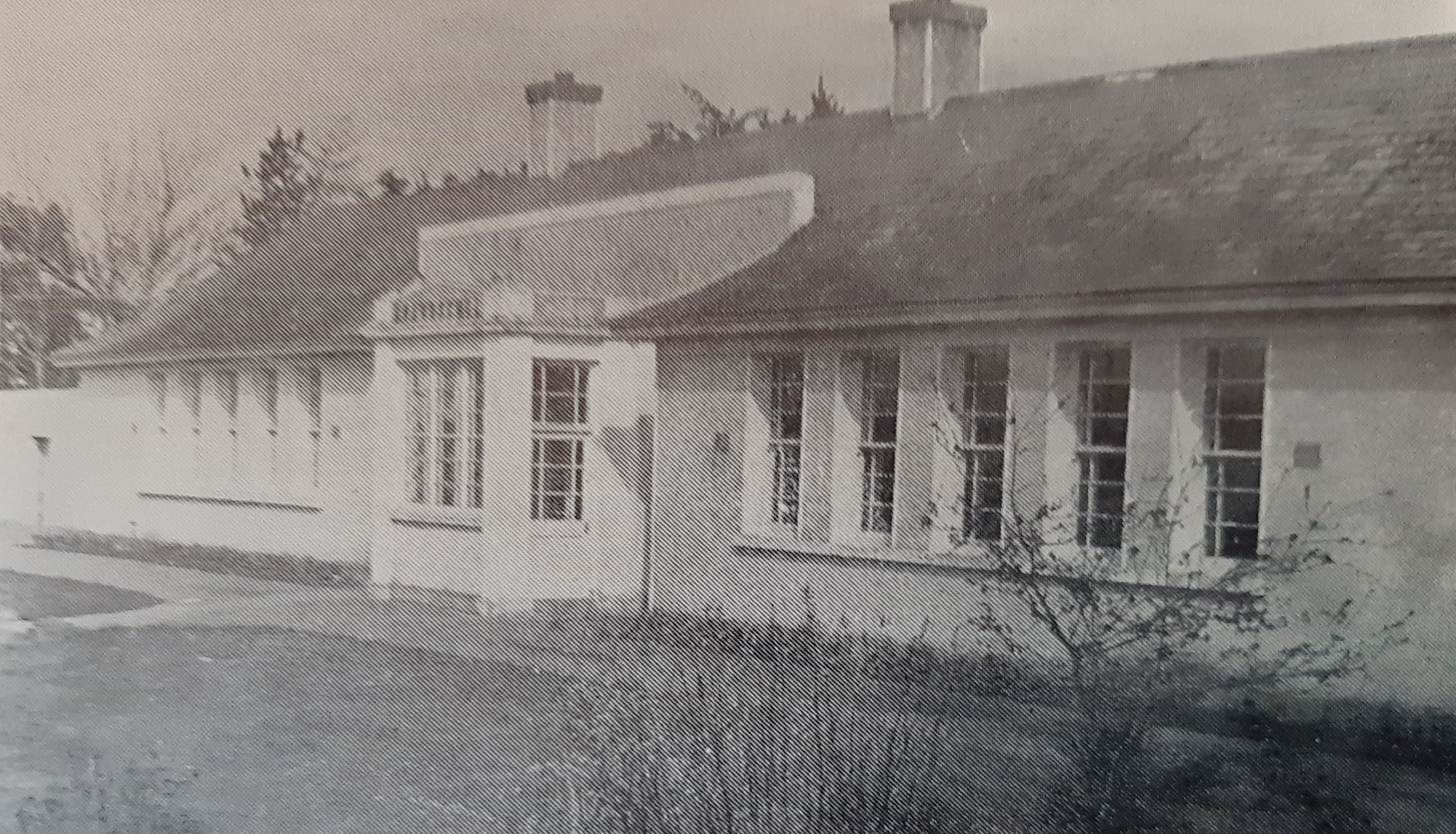 The Vocational School in Dromcollogher opened in 1941. John Quaid from the locality was Chairman of the County Vocational Education Committee at that time and was instrumental in securing this institution for Dromcollogher. The school was built on an elevated site outside the town on the Tullylease Road. In 1944, the Irish Tourist Association conducted a Topographical and General Survey around the country and a Ralph Lucas conducted the survey of Dromcollogher and Broadford in the Barony of Glenquin. Mr Lucas was quite frank in his reporting and he described Dromcollogher National School as “dark, primitive looking”. However, under the heading of ‘Important Public Buildings’ he wrote of the ‘Technical School’ as “a very fine modern concrete building”. When the school opened, Tom Villiers, R.Sc.I. was the Principal. 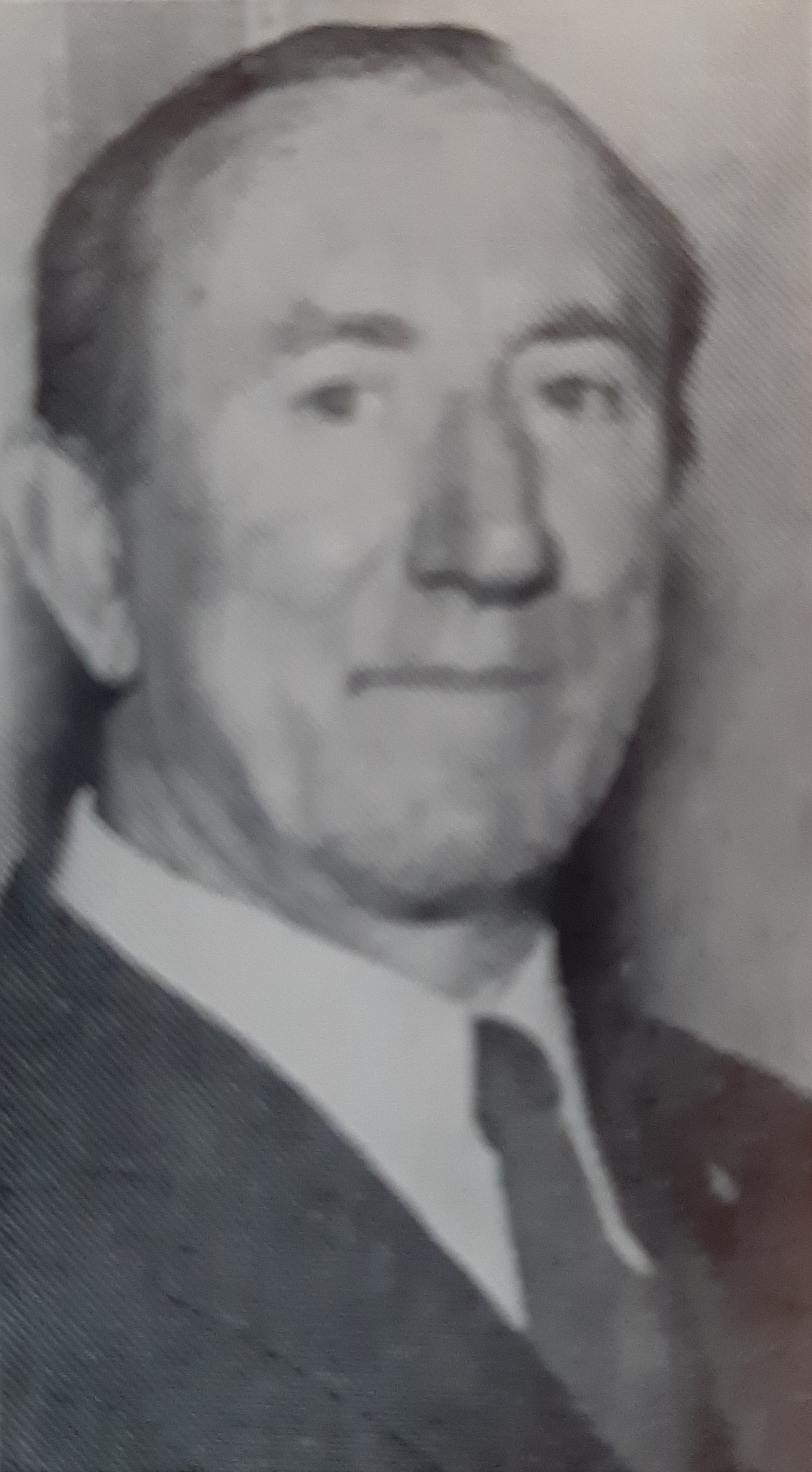 Tom Villiers R.Sc.I., the founding principal of the Vocational School.

Over thirty years later, in the mid-1970’s, Mr Villiers could report that “evidence of the successful work of the school can be seen in the results of a very recent survey carried out by the Department of Labour. 43 students left the school in 1974 and the great majority went to well paid employment of apprenticeships. Positions secured included 5 apprenticeships, 4 student nursing, 4 bank clerkships, 3 civil service posts and 3 clerical posts. Others again went to industrial employment and 4 boys took up farming at home while 2 boys went to Agricultural Colleges with Scholarships from the Committee of Agriculture. Amazingly, not one of the 43 is without employment. It cannot be said that 1974 was an entirely exceptional year for the school. The truth is that the prospects are excellent for young people who avail of the technical training provided in the school.” Tom Villiers, headmaster, with students at the Vocational School in 1955. 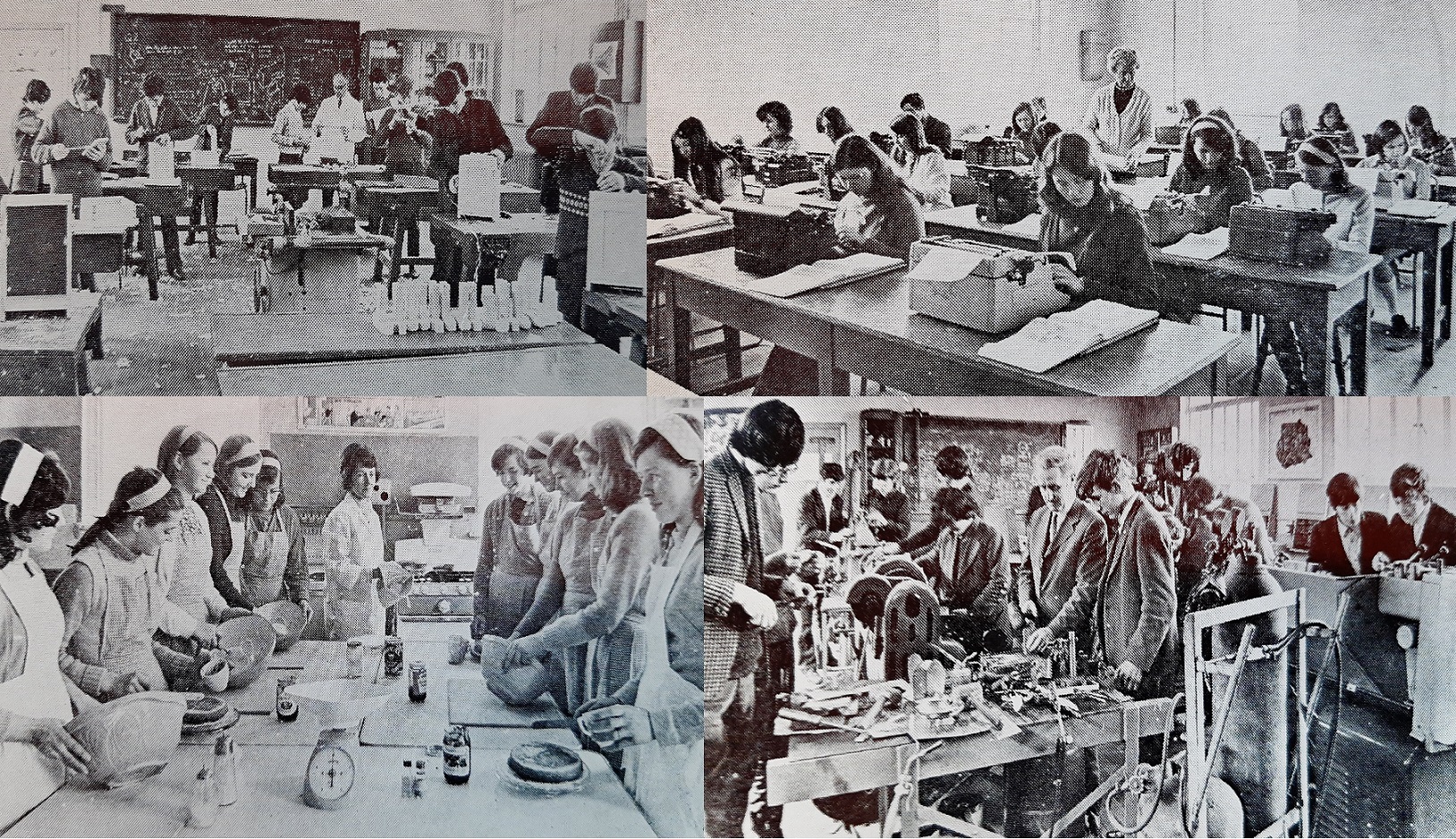 The courses on offer were the Group Certificate, the Intermediate Certificate and the Secretarial Course. The curriculum included subjects common for all students: Irish, English, Mathematics, History, Geography, Civics, Christian Doctrine, Physical Education, and Art. For girls Home Economics, Commerce, Typewriting, and Shorthand were available, while boys could avail of Science, Woodwork, and Mechanical Drawing. In addition the Commerce Class at the Vocational School studied Typewriting, Shorthand, Business Knowledge, etc. to the standard required for entry to the Civil Service, Bank, County Council, offices, etc. Over the years, the school was known by different names. “Ceárd Scoil” was over the door. It was the Vocational School and also the Technical School or ‘The Tech’. As the Community College it departed to another site and became Hazelwood College. These premises are now An tIonad Glas, The Organic College.

The Organic College, An tIonad Glas have made full use of the former Technical School premises since 2002, when the Community College moved to a new campus in the town.

The lunations have been thought by some to represent a type of lunar calendar that was used to determine the date of Easter each year. 112 lunations would represent 4 lunar months of 28 days. The Organic College- An tIonad Glas has its origins in the cooperative tradition of Dromcollogher. In celebrating the centenary of the first cooperative creamery in 1989, an acre of land was purchased and the café and museum began. A partnership was then developed with the local Vocational School here, which had been teaching horticulture since its foundation in 1942. Initially a prefabricated building at the back of the Vocational School was used and the first adult day course in Organic Horticulture in Ireland was started here in 1991.

Founder and former director of the Organic College, Jim McNamara is pictured here on the school grounds, sharing his skills and knowledge with members of the public during an open day at the college.

From its small beginnings the college developed a range of new courses in growing, sustainable living, beekeeping and cooperative enterprise, which were certified nationally, catering for local and overseas students. 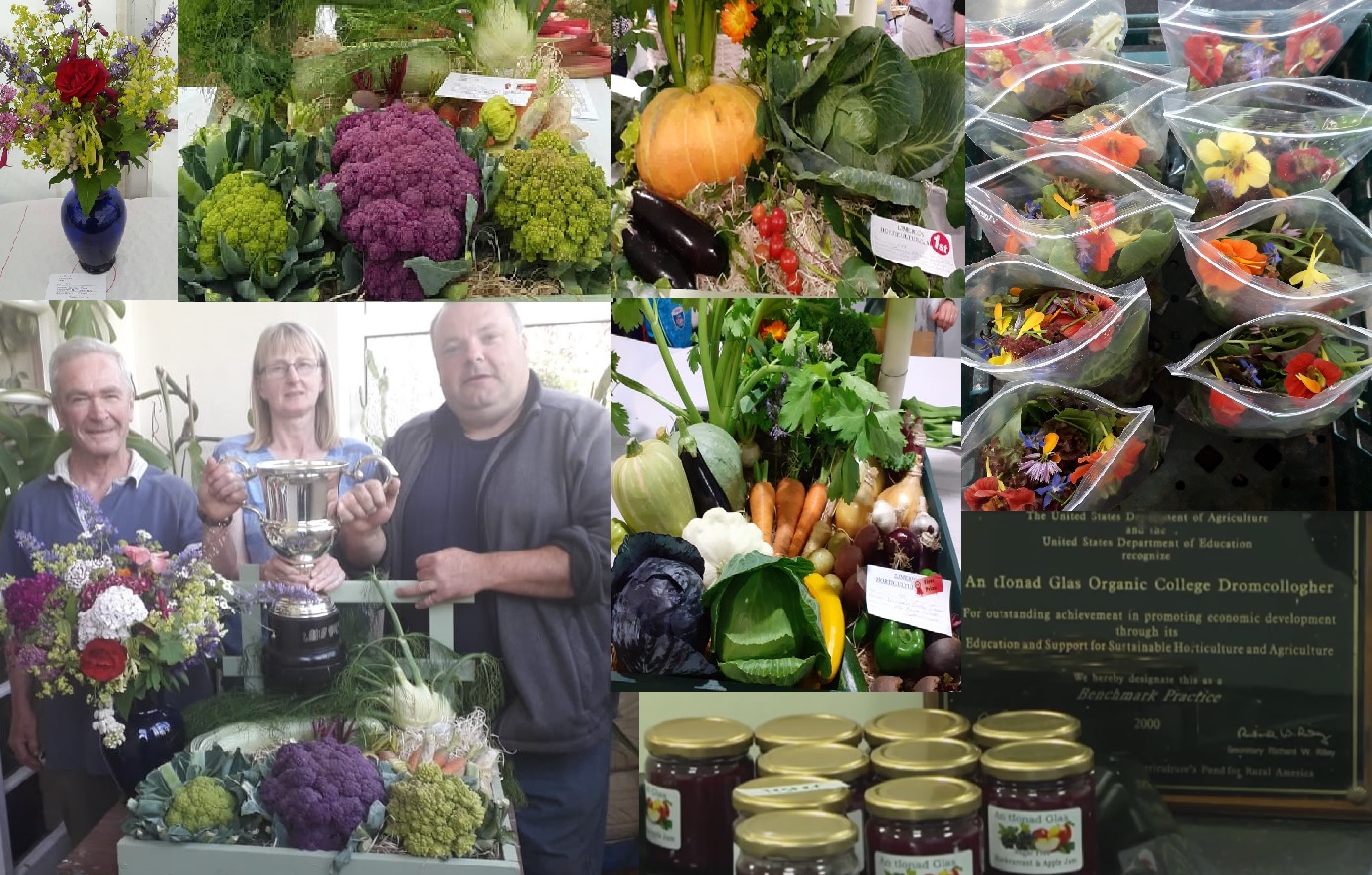 Some samples of the varied and colourful range of organic products that have won so many prizes and awards for the Organic College and its students.

Over the years the college has received several local and National awards for its work and for the quality of its produce. Its key features have been Some views, from inside and out, of two of the larger Poly Tunnels at the Organic College.

Organic production is especially important at the present time as food security, climate change and biodiversity loss now seen as issues that have to be addressed by everyone. While still a small section of the food market, the organic sector is growing each year, retaining spending and employment in the local communities it serves. 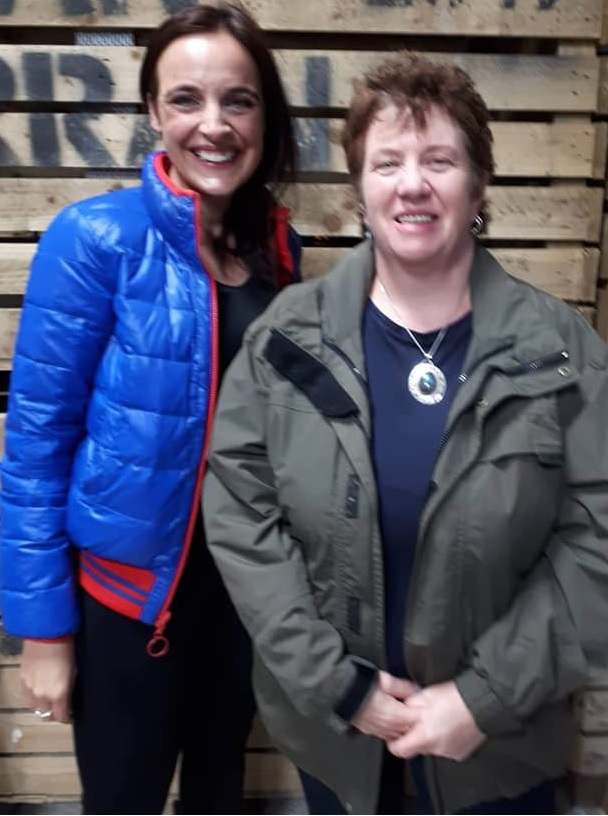 Dr Sinead Neiland, Director at An tIonad Glas, pictured with Ella McSweeney RTE to her left, during their appearance together on the Big Week On the Farm programme in 2019.

The college currently runs a range of courses in horticulture at Q.Q.I. levels five and six, which may be taken on a full-time, part-time or distance learning basis. Courses normally run from September until June with provision for a second level six year, which may continue through the summer months. These courses are sponsored by the Limerick and Clare Education and Training Board L.C.E.T.B. which is the parent body of the college. 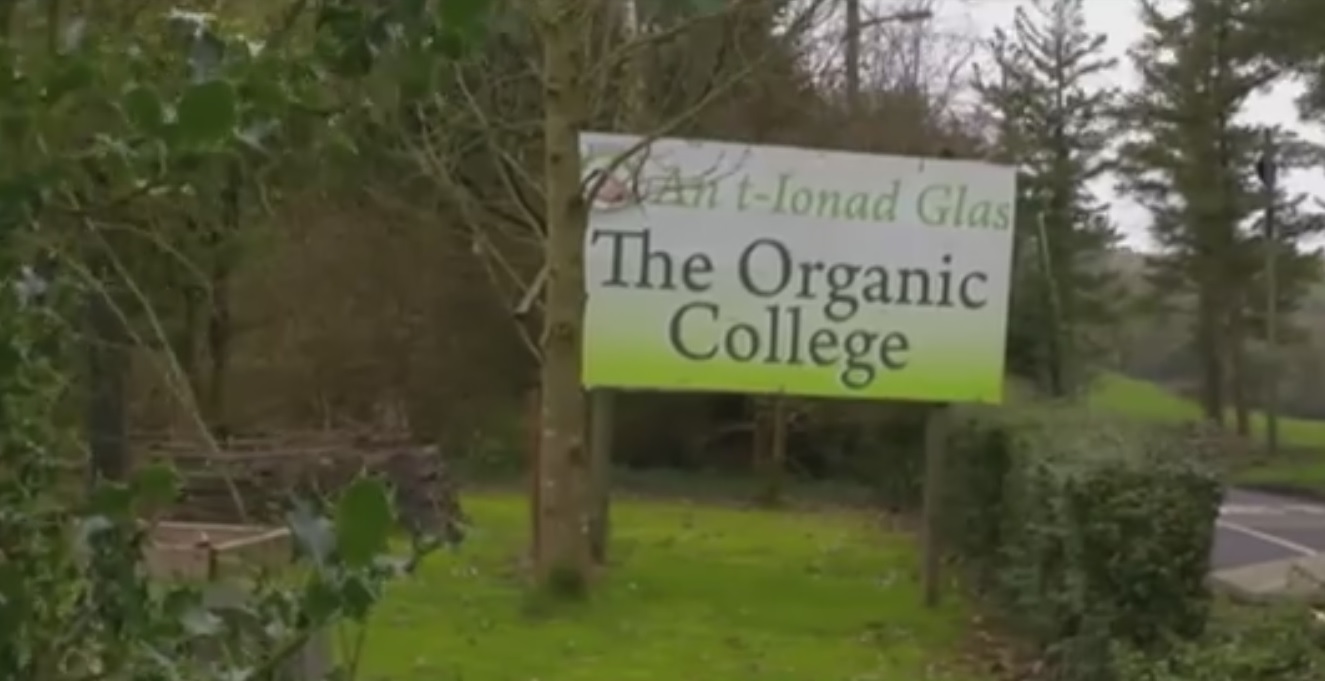 Offering, as it does, a third level education to its students, this brings to four, the number of educational institutions in Dromcollogher, ranging from Pre-School, to Primary and Secondary and also Third Level schools. 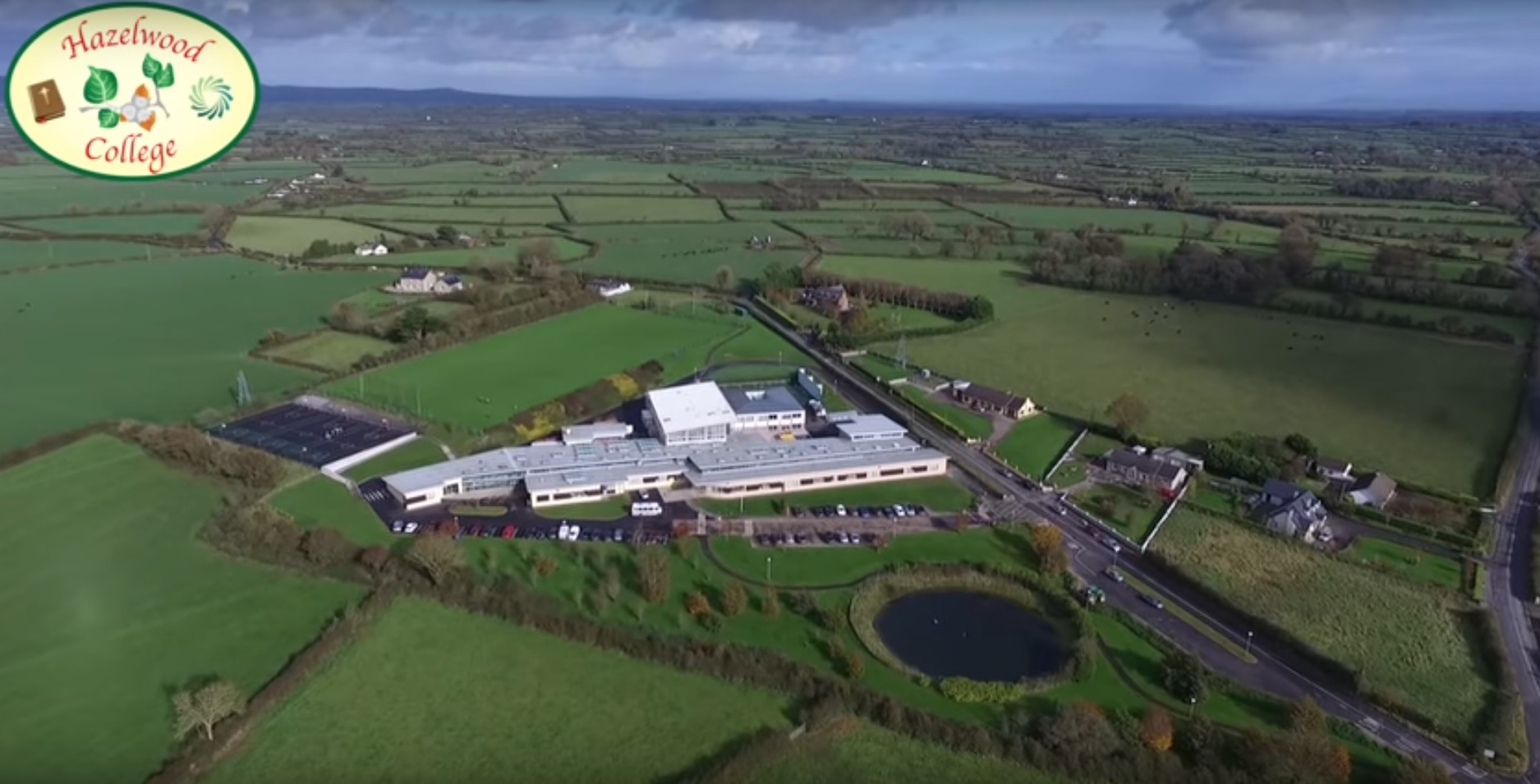 In 2002, the Community College moved to a new campus on the other side of Dromcollogher giving full use of these buildings and grounds for An tIonad Glas, The Organic College.