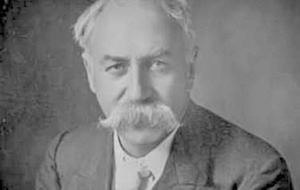 01 - Percy French - "There`s only one street in Drumcolliher"

Renowned song-writer and artist, Percy French boarded at the hostelry of Anthony McAuliffe during a visit to the town. He was so taken by his treatment there in 1894 that he composed one of his favourite songs – ‘Dromcolliher’.

On January 24, 1920, a man succumbed to pneumonia at the home of his cousin, at Formby, near Liverpool. That man was William French of Cloonyquin House, County Roscommon, better known throughout Ireland and the rest of the world as Percy French. Percy French, during his 65 years, penned a large number of comic songs, mostly based on themes related to life in rural Ireland. Through his visits to Lord Muskerry at Springfield Castle and his friendship with TJ Riordan of Charleville, Percy came to stay at McAuliffe's in Dromcollogher. 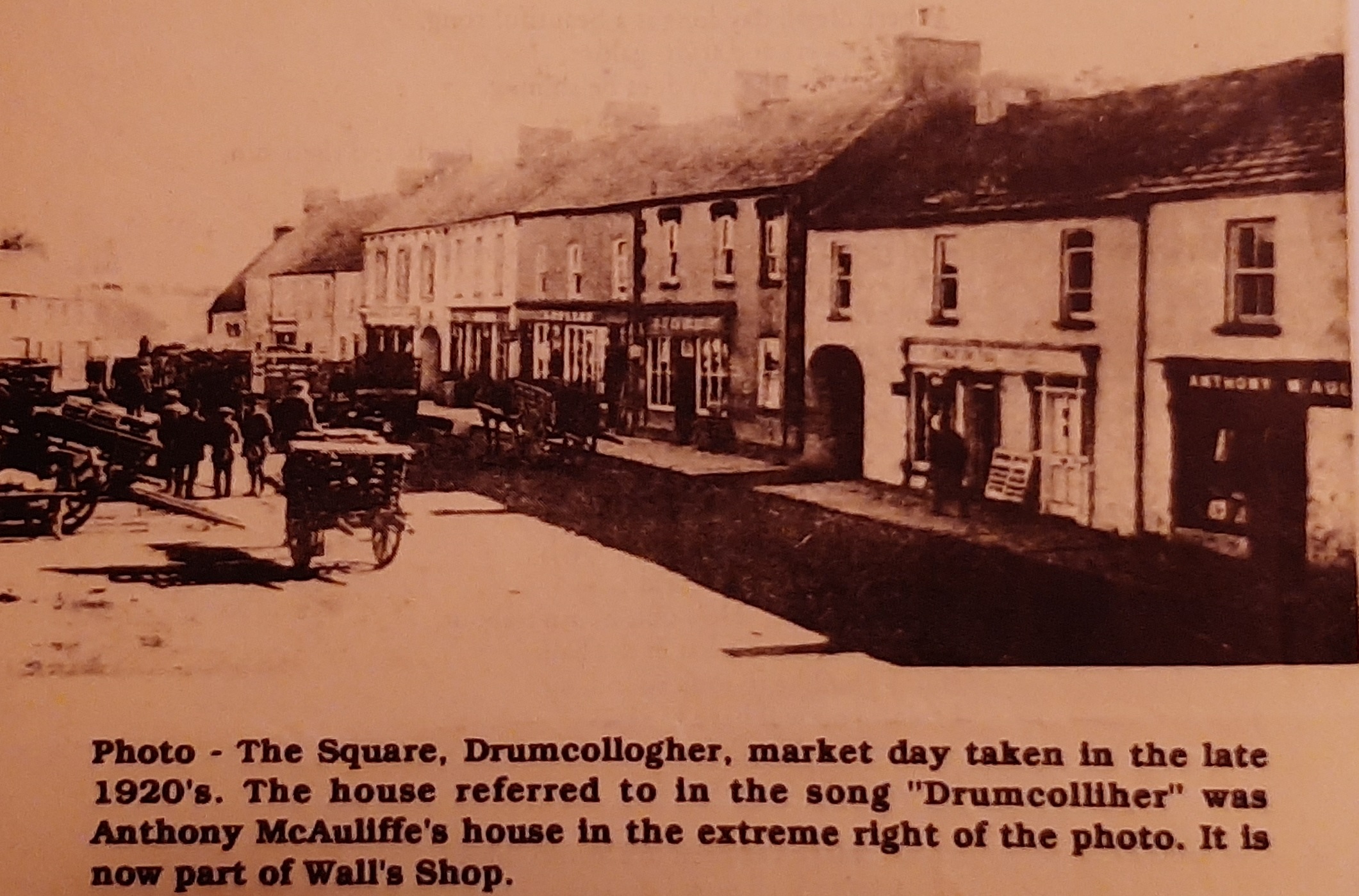 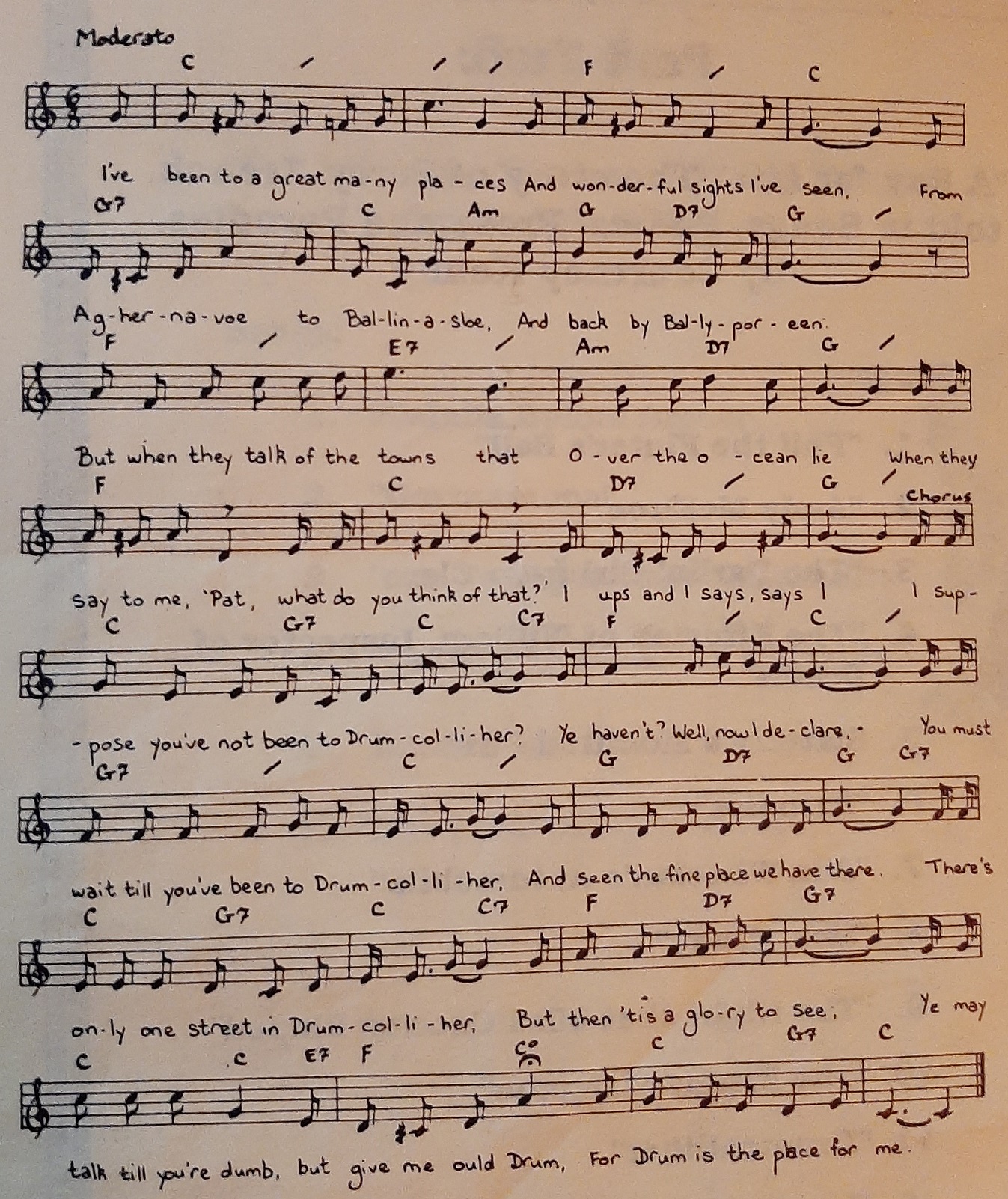 The house that was Anthony McAuliffe's shop and the hostelry that hosted Percy French is now part of Walls Hardware shop. A plaque was placed on the wall at that location on the occasion of a celebration centenary concert in 1994 by French's grand-nephew Courtney Kenny, commemorating the song ‘Drumcolliher’ and the visit to the town by William Percy French. 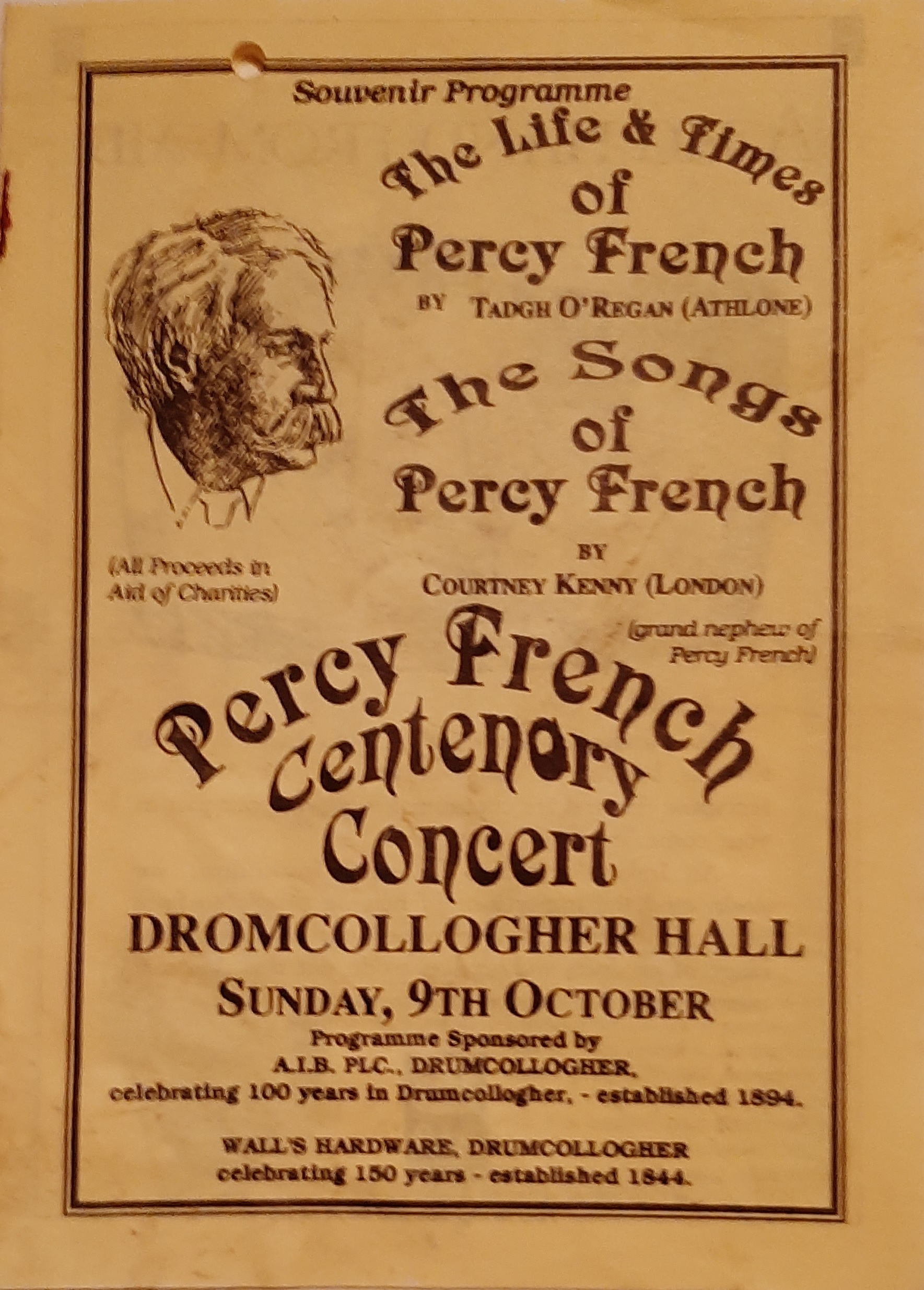 The Souvenir Programme that was produced for a celebration concert in 1994. 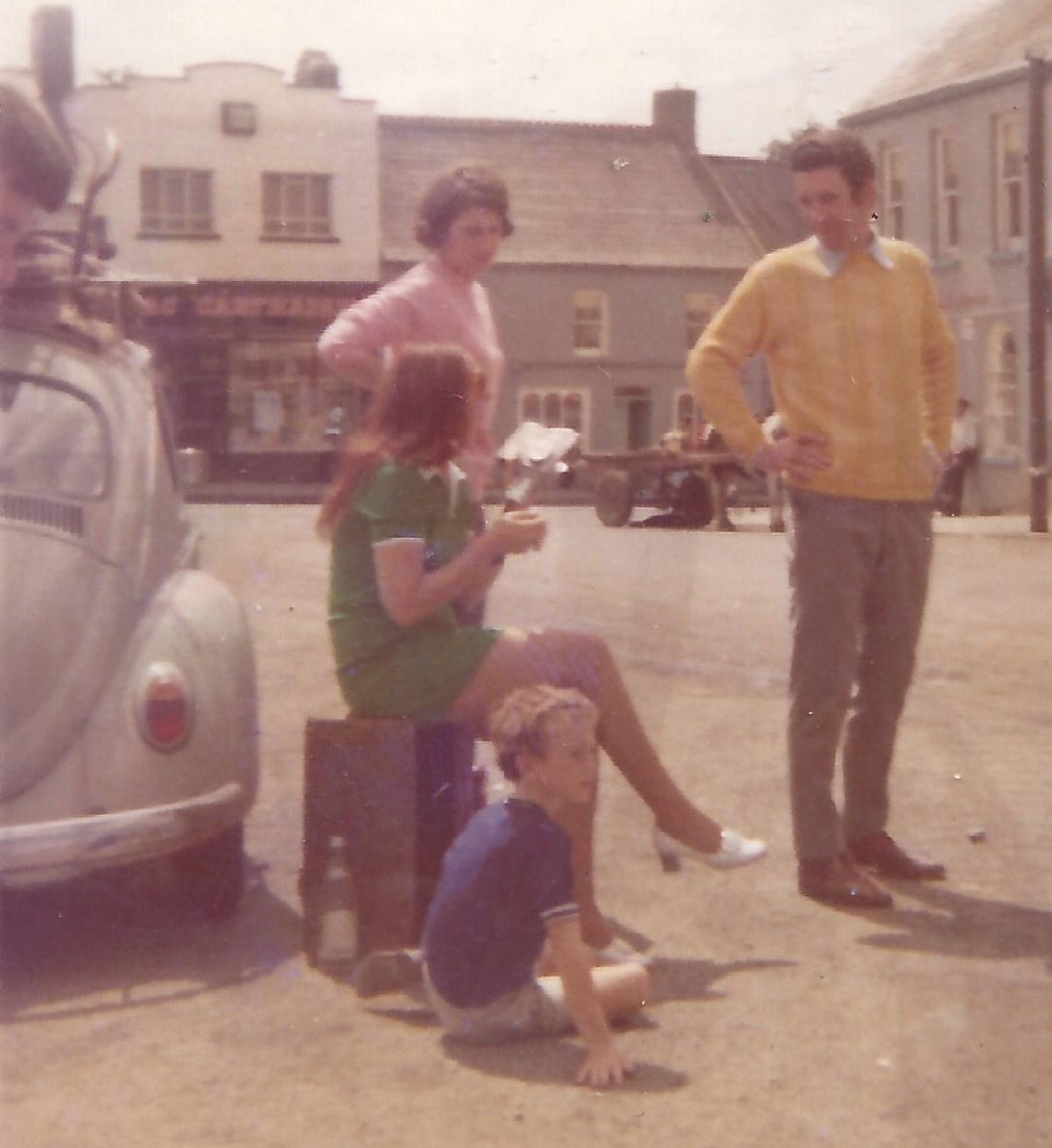 In 1969, on a hot and sunny July day, the acclaimed tenor, Brendan O’Dowda visited Dromcollogher. He is seen here in The Square where he is standing with his family beside the Volkswagen Beetle that had brought them and their equipment to Dromcollogher. Brendan was in town to record some video footage to accompany his singing of the Percy French song ‘Drumcolliher’, for a television programme. His visit caused quite a bit of interest and excitement and, out of shot here, there were crowds of locals lined up outside Wall’s and O’Halloran’s shops, keenly watching the goings-on. Later, when screened on television, it wasn’t the hopeful young lad in the photo who featured. Instead the song was recorded as Brendan O’Dowda strolled along North Road, hand in hand with a pretty young girl from that street, Mary Browne. 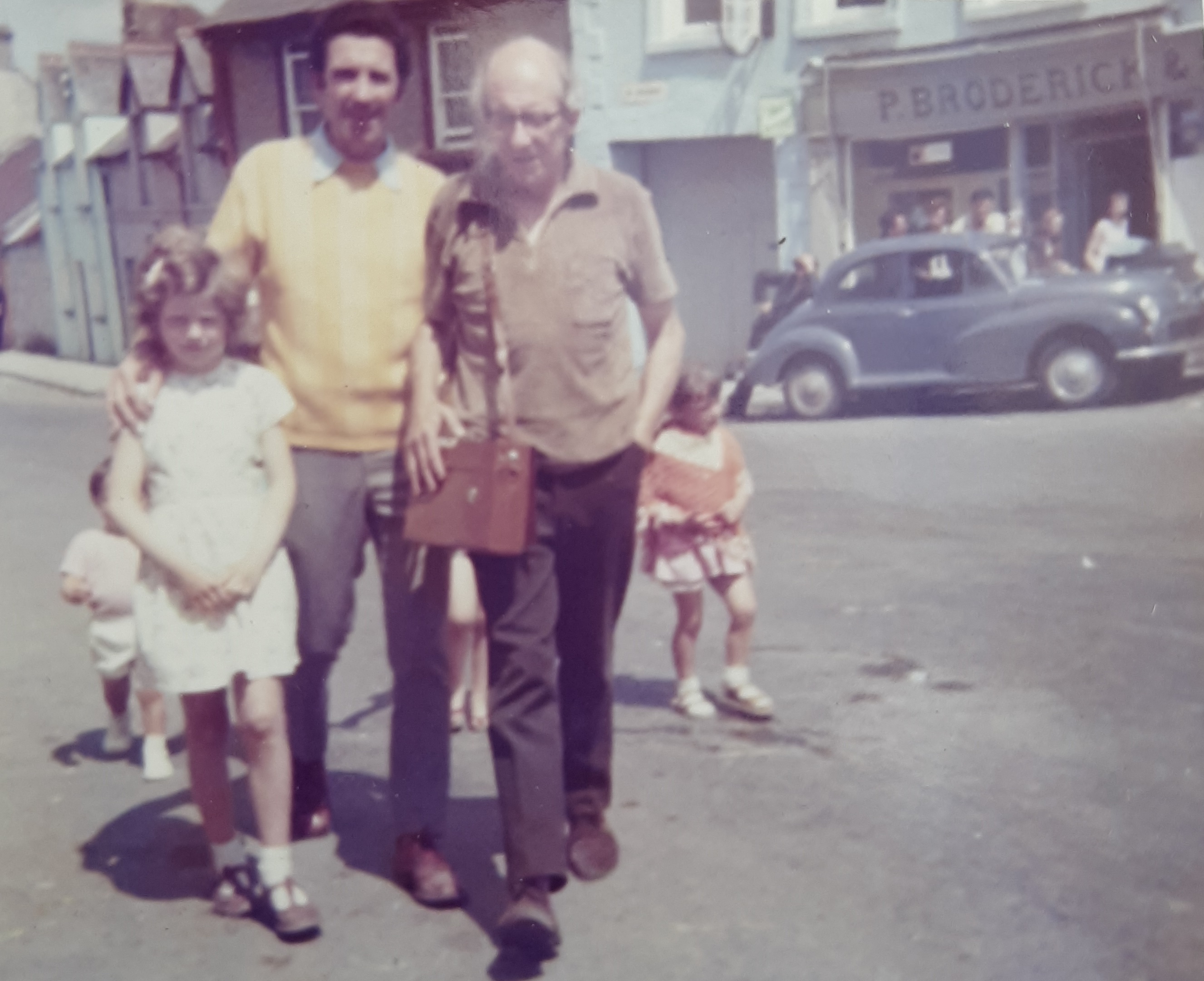 Another view of the acclaimed tenor Brendan O’Dowda during his visit to Dromcollogher in 1969. The other man in the photo may be a crew member but the girl to the left is Mary Browne, the ultimate star of the televised version of the song - Drumcolliher.