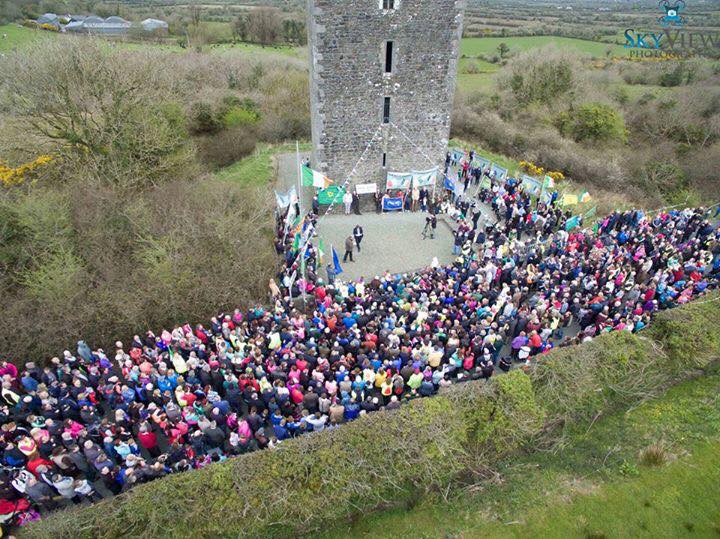 Dromcollogher had the distinction of being the second location outside of Dublin to organise a Volunteer Corps. On the occasion of the Easter Rising the local Company joined other units at Glenquin Castle in readiness to participate in the national uprising. They subsequently participated in several operations including the Burning of Dromcollogher Courthouse and the Dromcollogher Ambush. All of the Company operations, amounting to twenty five separate activities, are outlined below as well as listings of those who participated in them. Dromcollogher is fortunate to have testimonies to the events surrounding 1916 which were written by people who witnessed and participated in those events. Danny O’Callaghan was a young boy at the time who, in later life, faithfully recorded all the incidents he had observed on the streets of Dromcollogher in his youth. Charles Wall was an active participant and leader of the local Volunteering activities. Charles Wall also recorded his memories of these times and did so objectively, coherently, and without any self-aggrandisement. His experiences brought him into contact with many of the most famous names of this Irish revolutionary period. Charles mentions his attendance at O’Donovan Rossa’s funeral, his encounters with Capt Monteith, who came ashore at Banna Strand with Roger Casement, Terrence McSweeney who died on hunger-strike, Thomas McCurtain, Lord Mayor of Cork who was murdered by crown forces, Eoin McNeill, as well as Fr Thomas Wall, the local curate who was the subject of a much publicised row between the Bishop of Limerick and General Maxwell. 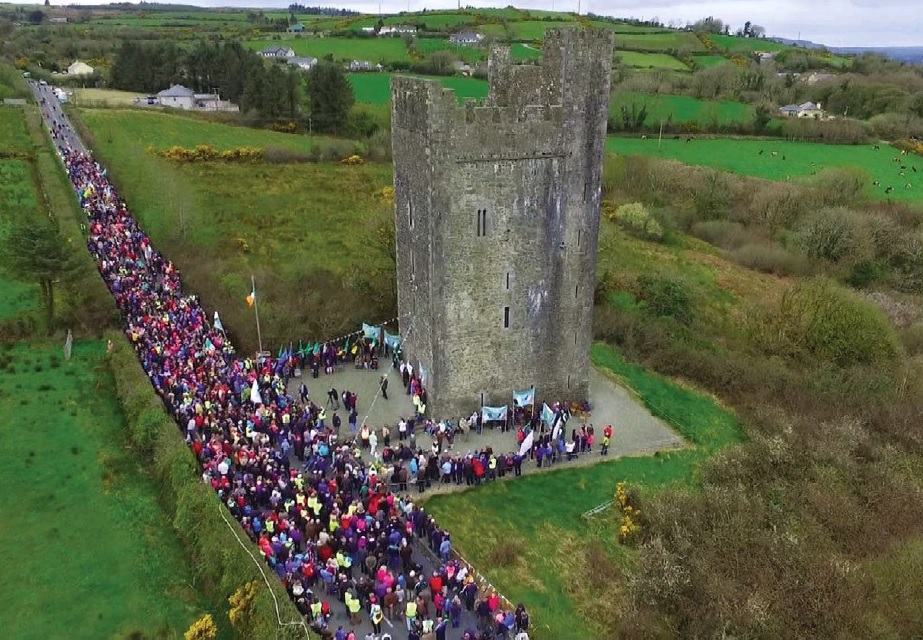 Glenquin Castle and the hundreds of people who gathered there for the commemoration of the activities of the local Companies of the Irish Volunteers at this site, on Easter Monday,1916.

Danny O’Callaghan outlines the political situation that pertained locally in the period 1913 to 1916. “During that period the main political faction were the A.O.H (Ancient Order of Hibernians) staunch supporters of the Redmondite Party who supported and advocated the Home Rule Policy. They organised and founded a Pipers Band, which was to play an important part in the social and musical life of the locality. Father Wall, the curate, was an Irish language enthusiast and a branch of the Gaelic League was established which was very active. They employed an Irish teacher Michail O’Foghlú and organised classes for adults in Irish Language and History. Sinn Féin then made its appearance and its small but active core of supporters could be found in the Gaelic League and G.A.A. sectors.

Apart from Concerts and Ceilithe, there was an annual Fair, which mainly helped to pay the modest salary of the Irish teacher. A company of Irish Volunteers was founded and gradually swung to the Sinn Féin concept of political action. Drill meetings and parades became a common feature of activity and hurleys and timber guns improvised for rifles. Father Wall played a prominent and directing part in the militant movement, and through his contact at high levels brought many an important figure to Dromcollogher.” 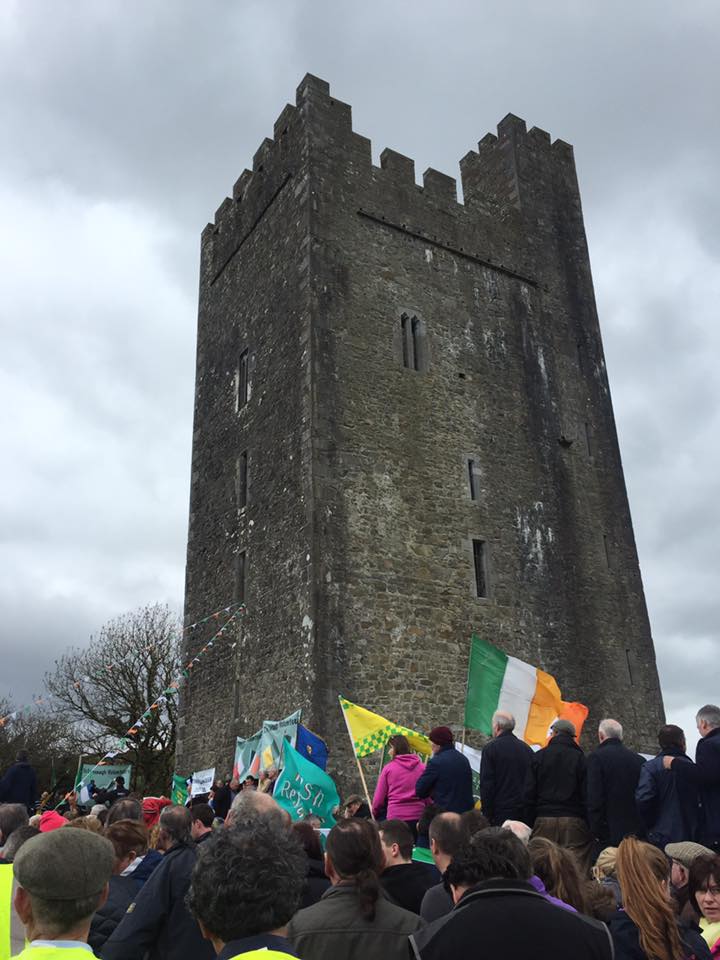 A view of the gathering at Glenquin Castle for the commemoration of the activities of the local Volunteer Companies there on Easter Monday, 1916.

To describe the activities of the local Volunteers during the Rising, the following is the extract from Charles Wall’s writings that relates to Easter 1916. 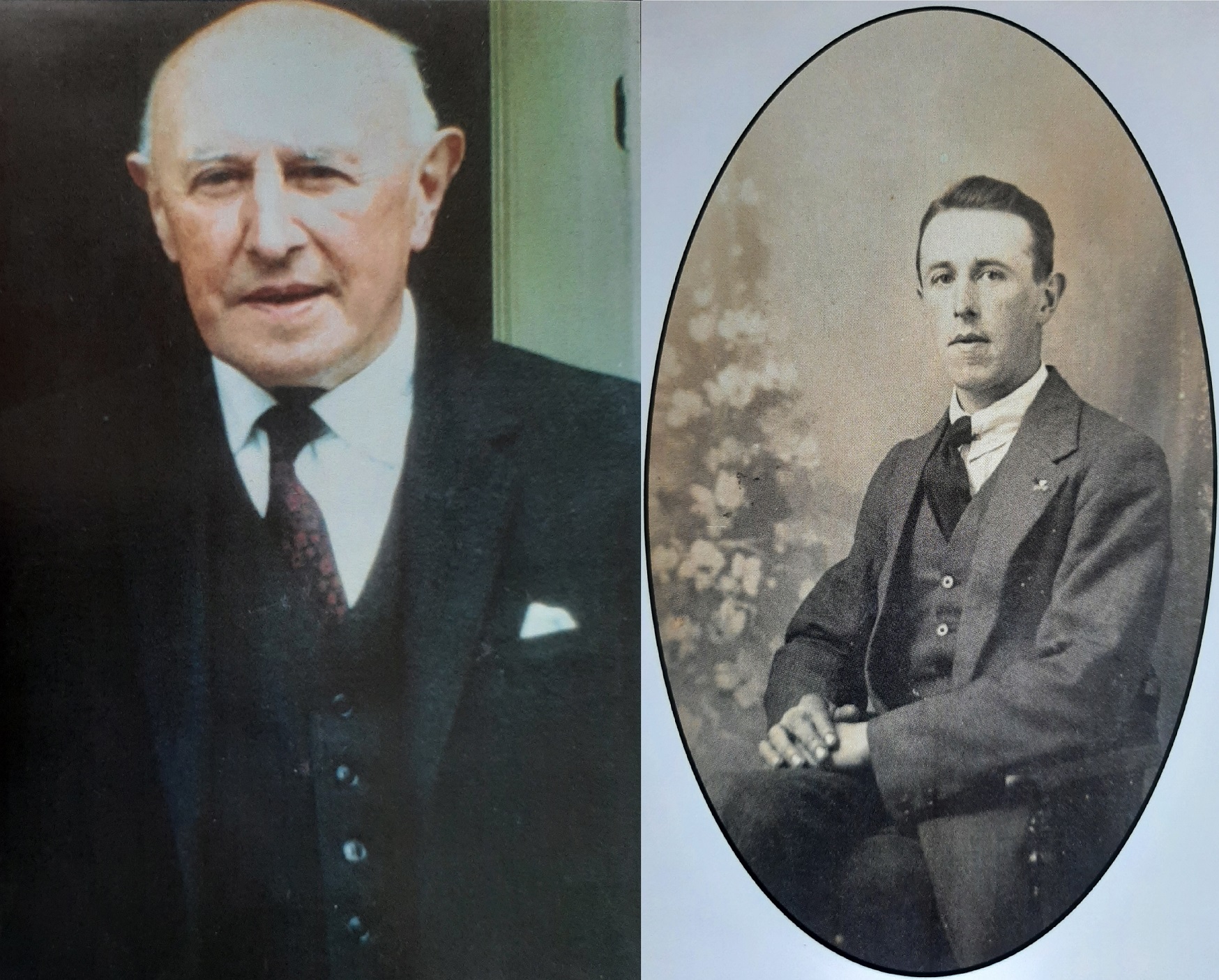 Charles wall in 1966 and as a young man who led the West Limerick Volunteers.

“On the Tuesday evening prior to Easter Week I was in the local hall. There were about thirty Volunteers there and I was putting them through some arms drill. Around nine o’clock Fr. Wall came into the hall and calling me he said I was wanted urgently at Miss Lill O’Connor’s restaurant and to hand the men to Tadhg O’Shea who was second in command. When I arrived at Miss O’Connor’s there were two men there who introduced themselves, Capt. James McInerney for Limerick Brigade Headquarters and a Capt. Comerford from Dublin. They asked me a number of questions about the number of men we had and also the number of firearms at our command and various other matters. I explained that we had between thirty and forty men, as regards arms we had twelve rifles, some revolvers and shotguns. They told me they had important matters to discuss and it would be necessary to swear me to secrecy. So I was sworn to the I.R.B. and I was then appointed commandant of the West Limerick Volunteers. I was to issue mobilization orders to assemble the men at Glenquin Castle at 3 p.m. on Easter Sunday with full equipment and three-day rations, but no further information was to be given by me.

They told me that the Rising was to take place on Easter Sunday.

Our part would be very important as an arms ship from Germany was arriving off the Kerry coast on Sunday morning. The arms train from Kerry was due to arrive at Barna station, which is midway between Abbeyfeale and Newcastle West at 5 p.m. and it would be boarded by the Volunteers who would help to get the engine on the turntable in Newcastle West. By the time the train reached Limerick it was hoped that the city would be in the hands of the Limerick City Regiment of the Volunteers. Portion of the train was to go on to Gort Co Galway with arms for the Galway men. 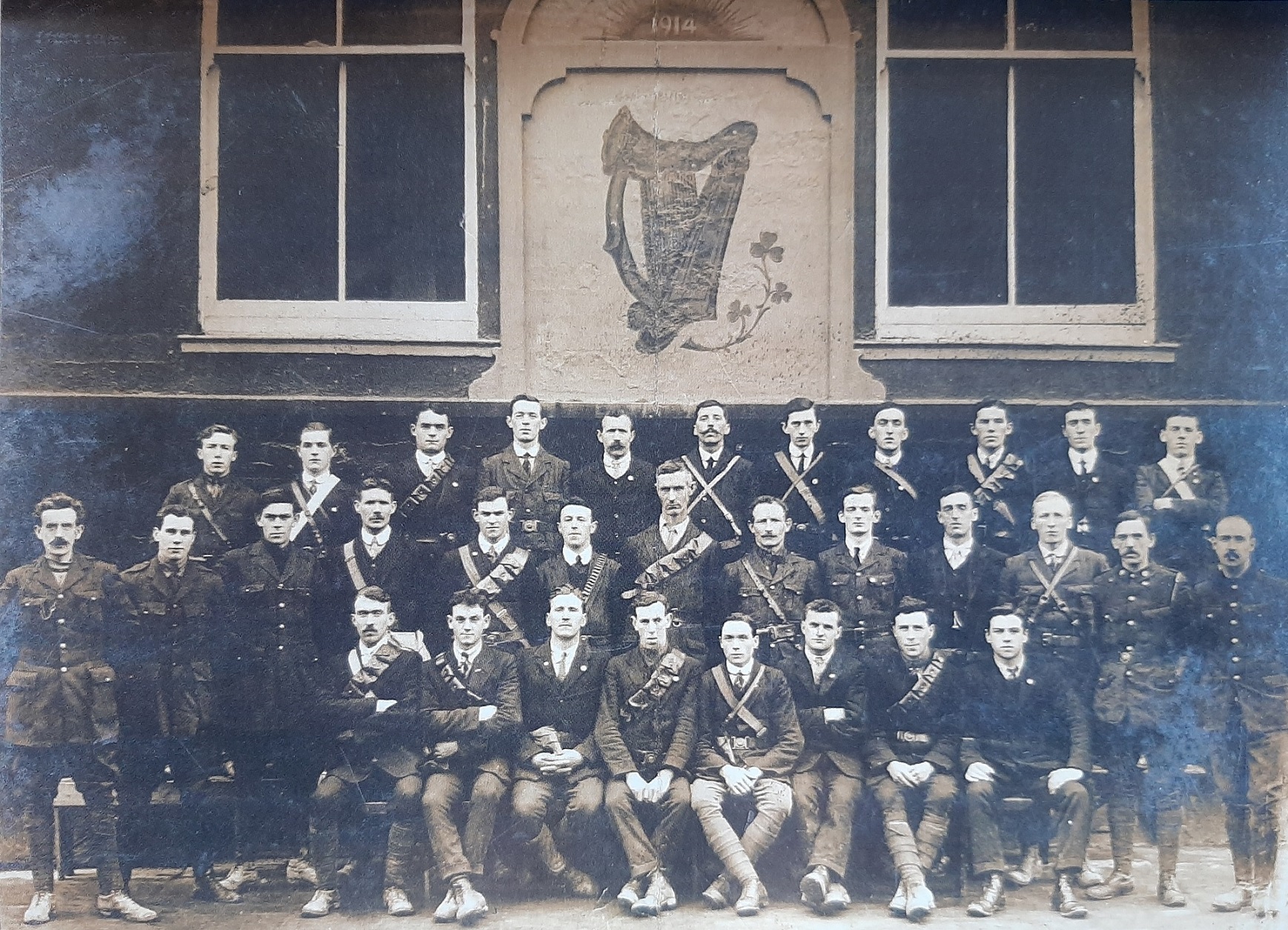 I sent out mobilization as ordered. I received some disquieting news about the arms ship so I cycled to Newcastle West on Good Friday and I interviewed Michael O’Gorman, one of the officers attached to the Newcastle West company. He told me that the local R.I.C. were holding up all cars passing through. I told him to carry out all the mobilization plans, with the result that eleven companies of Volunteers assembled at Glenquin. They were drawn from the following units – about one hundred and fifty men – Dromcollogher, Broadford, Monagae, Templeglantine, Killoughteen, Newcastle West, Tournafulla, Ashford, Raheenagh, Ardagh, Athea. Two chaplains were in attendance, Fr Tom Wall C.C. Dromcollogher and Fr Michael Hayes C.C. Newcastle West. Fitzgerald’s bread van from Dromcollogher arrived with supplies of bread.

There were twelve members of the R.I.C. there. We had arranged that they would be seized and made prisoners. The Volunteers would then be told that the Rising had begun and any man not willing to take part would be free to withdraw. The only condition imposed on those withdrawing was that they were not to return home directly but were to remain all night in the hills.

We arrived at Glenquin Castle on Easter Sunday at three o’clock in the afternoon, but before the hour for action struck, a young officer in full military uniform, from one of the Limerick City battalions, arrived with Eoin McNeill’s countermanding order, stating that all manoeuvres were called off.

To put the police off the scent we carried out the usual exercise, drill and so forth. At six o’clock in the evening I gave the order to dismiss and we went home.” In the immediate aftermath of the Rising in Dublin, an order was received from P.H.Pearse, Commandant General of all Irish Volunteers to surrender all arms. Reluctantly, but at the urging of Fr Wall, all of the men in possession of rifles locally handed them up to the local R.I.C. barracks. The following week Commandant Charles Wall was arrested. He was taken initially to Newcastle West and from there to Limerick County gaol. After a few days a court-martial heard that the arms had been handed over and Charles Wall was released. 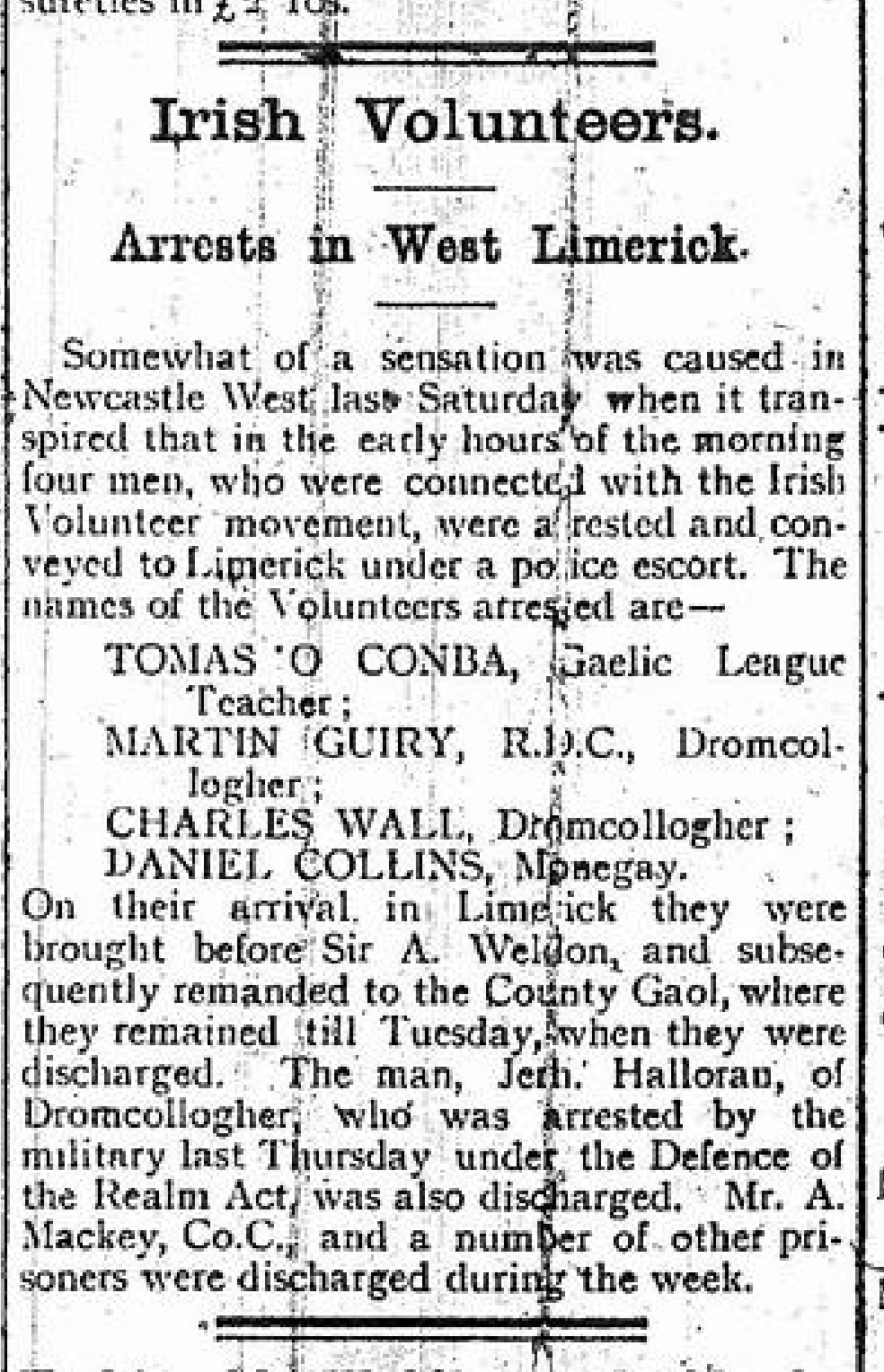 Newspaper account of the arrest and subsequent release of Charles Wall and others following the 1916 Rising.

The heading of the Military Archives Report on the Operations of the Dromcollogher Company of the Irish Volunteers.

West Limerick Brigade Committee certified the Record of Operations of the Dromcollogher Company – “A” Company of the Third Battalion.

2) In 1915 the Co. attended a parade of Volunteers in Limerick and a review of Volunteers in Lough Gur before Professor Eoin McNeill. The Co. were getting advanced lessons in Rifle practice from Capt. Monteith who was then an instructor to the Limerick Volunteers. The following attended under Arms at Lough Gur and Limerick for Parades and training:- Captain Charles Wall; 1st Lieut. Timothy O’Shea; Sean Ryan; Michael Wall; Martin Geary; Michael Sheehy; Benjamin O’Sullivan; Gerald Fitzgibbon; Michael Pierce.

5) + In 1918 the Co. raided for arms. + Had a clash with the R.I.C. at Dromcollogher on the 30th June 1918 day of Aeriocht. + Volunteers were sent to Waterford, Pallas, etc. for election activities. + Carried out boycott on a man for taking op a post in the Post Office from a Volunteer of the Coy. The following is a list of some of the Coy. who took part in these activities:- Benjamin O’Sullivan; Timothy O’Shea; Michael Sheehy; William O’Sullivan; Maurice Kiely; William McCarthy; Patrick Stokes; John Farrell; Patrick Buckley; Timothy O’Dwyer; Timothy Collins; Garrett O’Dwyer; Michael O’Connell; John Hartnett.

6) In 1919 the Co. wrecked Hunts house owing to an R.I.C. man renting it. Also enforced boycott on Brodericks and O’Kelly’s for breaking out an R.I.C. man against a Volunteer. The Co. had to guard the town at night for a long period owing to Boycott. The following is a list of some of the men who took part in this activity. All were armed. Benjamin O’Sullivan; Timothy O’Shea; Michael Sheehy; William McCarthy; William O’Sullivan; Maurice Kiely; John Farrell; Patrick Stokes; John Hartnett; Timothy O’Dwyer; Timothy Collins; Michael O’Connell; Garrett O’Dwyer.

7) In 1920 the Co. made dumps and removed Arms and ammunition from suspected places to these dumps .

8) Drilling and parading under Arms in Brigade area .

10) In 1921 the Co. raided the mails under Arms. Broke bridges; blocked roads; cut wires; made trenches and kidnapped a sheriff’s man .

11) Assisted at the ambush at Dromcollogher where an R.I.C. mans was shot on the 14th May 1921. The wires on this occasion had to be cut on the Charleville and Broadford roads at six o’clock P.M. as the ambush took place at that hour; Assisted the victims of the reprisals; Raided the Post Office and took away the ‘phones. Raided the Munster and Leinster Bank and took two Bicycles for dispatch riding .

12) Took part in the burning of Springfield Castle, and at a great risk had to commandeer the Oil for the burning of same. William McCarthy of Dromcollogher then Captain of A. Coy attended a Battalion meeting at Broadford and got others to mobilise twelve men to procure oil for burning .

13) The Co. attended different camps in the Brigade area .

14) The Clerk of the Petty Sessions Court was held up and all the dog Licences money taken from him .

17) Billeted the different corps that came into the Co. area .

20) Assisted at the surrounding of Free State Troops in Glenduff Castle in June 1922 .

21) Took possession of Dromcollogher Post Office and held it for six weeks it being the direct line between Cork and Limerick .

22) Took over National Schools for Barracks .

25) Billetted the troops that retreated from Limerick. The following is a list of the men that took part under arms in the above activities and was the strength of the Co. at the time:- Capt Tim O’Shea; Michael Sheehy; William McCarthy; Maurice Kiely; William O’Sullivan; John Farrell; Timothy Collins; Anthony McCarthy; Patrick Stokes; Michael O’Connell; Daniel Browne, Gardenfield; Benjamin O’Sullivan. 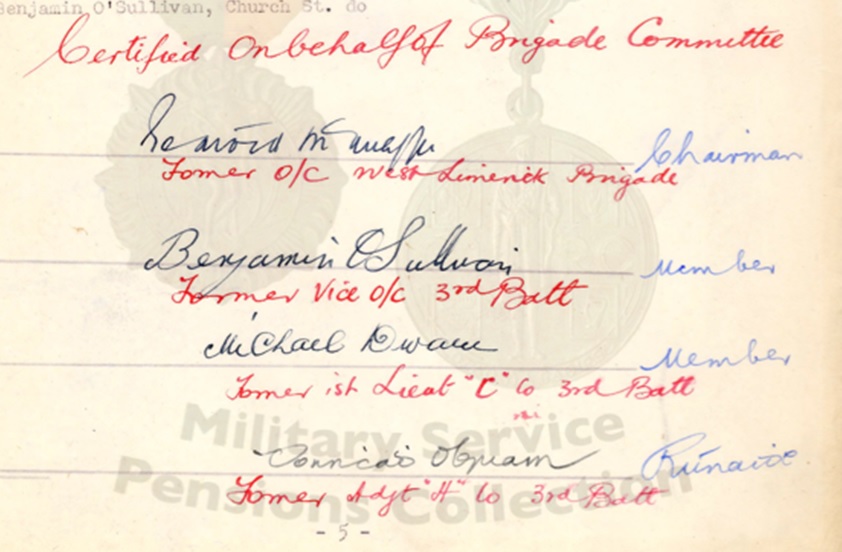 The signatures certifying the Report on the Operations of the Dromcollogher Company of the Irish Volunteers.

Acknowledgements: The foregoing is comprised of extracts from the writings of Danny O'Callaghan and Charles Wall as well as the Report on Operations from the Military Archives.